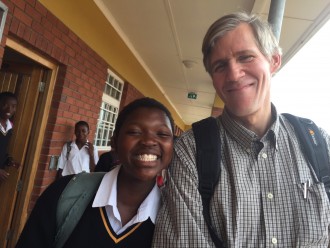 KALAMAZOO, Mich.—For many students, mathematics isn't an easy subject to master. Teaching mathematics in a country like South Africa, which has 11 official languages, can also be daunting.

Although English is the common mode of instruction in that country, Dr. Jon Davis thinks doing a little more talking about math could lead to better learning outcomes for students. So he is using his six-month-long Fulbright Program Scholarship to delve deeper into how conceptual discourse and code-switching techniques can be tools in promoting student understanding.

An associate professor of mathematics, Davis is one of the six Fulbright Scholars from WMU who are working around the globe this academic year. At WMU, he has been teaching content classes up to the calculus level as well as mathematics education courses for master's and doctoral students and prospective middle school and high school teachers.

What's talk got to do with it?

Davis traveled to South Africa in January to explore ethnomathematics—the study of the relationship between culture and math—and to observe mathematics instruction within South Africa's centralized education system. He is conducting his work at Nelson Mandela Metropolitan University and secondary schools in townships near Port Elizabeth.

"I'm particularly interested in studying a discursive method known as 'exploratory talk,' the kind of talk where participants engage critically but constructively with each other's ideas," Davis says. "I'm also interested in what linguists call 'code-switching,' which has been encouraged throughout South Africa across a variety of academic subjects because of the multilingual nature of the country's classrooms."

Davis says code-switching involves the use of two or more languages within a speech act.

"You explain a concept in English, then give students time to code-switch between languages to fully understand the subject," he says. "Students have the ability to interact with the material at a deeper level when you give them the time to use their preferred language to process the content before responding in English." 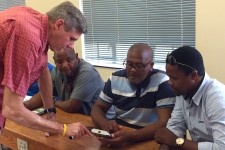 While in South Africa, Davis has been invited to teach classes that concentrate on middle school mathematics content, mathematics literacy and methods of teaching mathematics. He also has been asked to give presentations on his current National Science Foundation grant, which focuses on how middle school math teachers use curriculum materials to teach America's Common Core mathematics standards. In addition, he is exploring opportunities for collaboration with South African researchers and for opening up study abroad options for WMU undergraduates.

"Visiting South African schools enables me to see the U.S. educational system in a new light—to make the familiar strange," Davis says. "That, in turn, will benefit the discipline by reinvigorating my research in school mathematics classrooms."

Some of his activities are having an immediate impact on South African students and teachers. In February, for example, Davis visited the Solomon Mahlangu secondary school in a poor township area outside of Port Elizabeth. He spent a day observing math teachers and delivering motivational speeches on the importance of diligently studying mathematics. He also donated to the school a set of textbook materials developed through WMU's Core-Plus Mathematics Project and TI-Nspire CAS handheld calculators. Davis later returned to the school to train its teachers on how to use the calculators.

"I intend to use my experiences in South Africa to bring a global perspective to our methods courses at WMU and promote study abroad within the mathematics department," he says. "The WMU mathematics department is committed to fostering global competency and cultural awareness among its students. My Fulbright award will be a major step toward this global engagement."