KALAMAZOO, Mich—A physician, advocate and author will connect racism and income inequality to health and well-being during a free, public talk at 7 p.m. Tuesday, June 6, in downtown Kalamazoo.

The talk will be given by Dr. David A. Ansell, senior vice president of community health equity and associate provost for clinical affairs at the Rush University Medical Center in Chicago.

It will be held in the auditorium of the Western Michigan University Homer Stryker M.D. School of Medicine. Free parking will be available in the adjacent Bronson Methodist Hospital lot at Portage and Lovell streets.

Ansell will discuss the often unseen root causes of unequal life chances in the U.S. and advocate for sweeping changes in policy and practices to create a health care system and society that are more just, according to Tim Ready, director of WMU's Lewis Walker Institute for the Study of Race and Ethnic Relations, which is co-sponsoring the event.

Drawing on his 40 years as a physician caring for patients from Chicago's South Side, Ready says Ansell will illustrate through his patients' stories how he came to diagnose structural violence as the ultimate cause of the unnecessary suffering he addressed on a daily basis.

"That suffering went hand-in-hand with a decreased life expectancy for many of Ansell's patients compared to people who were living in other areas of Chicago," Ready says. "This difference in life expectancy reflects differential exposure to environmental stressors and other social determinants of health related to racism and economic insecurity—what Ansell calls structural violence." 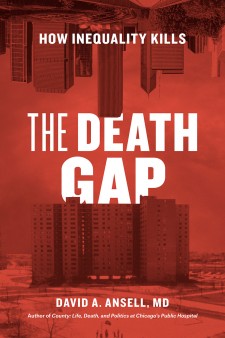 Ansel has written two books that call attention to structural violence, with his newest one, "The Death Gap: How Inequality Kills," being released this spring. The book contends that structural disparities are the reason the average life expectancy in the U.S. is only 79, despite America being the world's leader in high-tech medicine.

He adds that he agrees with Ansel that unquestioning acceptance of inequality in health and in other indicators of well-being by race, place and class creates an empathy gap that perpetuates the kind of structural violence Ansell describes in his books.

In addition to the WMU Walker Institute, Ansell's talk is being co-sponsored by the WMU Homer Stryker M.D. School of Medicine, Shared Prosperity Kalamazoo, YWCA Kalamazoo, Interfaith Strategy for Advocacy and Action in the Community, and Organize West Michigan.

For more information about the talk, visit wmich.edu/walkerinstitute or contact Ready at timothy.ready@wmich.edu or (269) 387-2142.