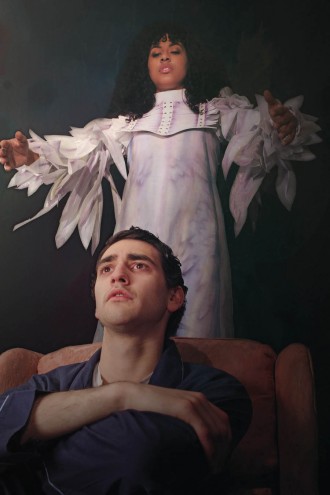 Two hours before each scheduled performance, sections of the internationally celebrated AIDS Memorial Quilt—the 54 1/2-ton, handmade tapestry that stands as a memorial to more than 96,000 individuals lost to AIDS—will be on display at the Gilmore Theatre Complex. The quilt also will be available to view from 9 a.m. to 5 p.m. Monday through Friday, Feb. 5-9 and Feb. 12-16.

"Angels in America" takes place during the height of the AIDS epidemic in Reagan-era New York City, sharing both a political and a personal snapshot of its time and place. It holds a mirror up to a time in American history that was a living nightmare for many and simply a news story for the rest.

The story tracks two couples, a gay couple from Greenwich Village and a married Mormon couple from Salt Lake City. The paths of these two couples seem fated to cross, and when they do with the help of heavenly intervention, their worlds implode. "Angels in America" combines the ethereal with the unsparing, the human with the unknowable, and the ugliest of suffering with the illuminating power of love and compassion. 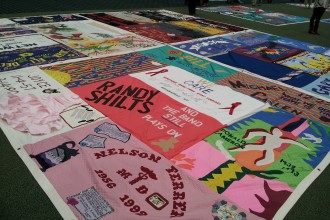 The AIDS Memorial Quilt will be on display two hours before every scheduled performance of "Angels in America."

Despite the fact that the stinging fear of AIDS is a painful or even terrifying memory for many, a whole generation of Americans have been brought up with limited knowledge of its scope. HIV.gov estimates that at least a shocking 1,122,900 Americans were living with HIV and AIDS in 2015. As such, the University Theatre has taken the opportunity provided by this production to teach its students about the virus—from its history to its contemporary presence to the impact it has had on those it touches, both on a personal and communal level.

The cast of "Angels in America is directed by Dr. Joan Herrington, chair of WMU's Department of Theatre.

Tickets are $20 general admission, $18 for seniors and WMU faculty and staff, $10 for students, and $6 for WMU student. They are available at wmich.edu/theatre, by calling (269) 387-6222, or by visiting the Gilmore Theatre box office between noon and 5 p.m. Monday through Friday. The Miller Auditorium box office also sells tickets to University Theatre productions.