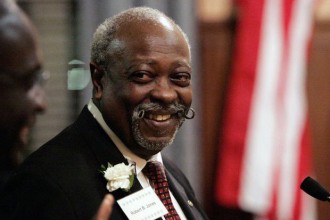 KALAMAZOO, Mich.—Acting at its Jan. 24 meeting, the Western Michigan University Board of Trustees unanimously approved naming a new roadway in phase two of the Business Technology and Research Park in honor of the late community leader Robert B. Jones.

Robert Jones Way will be the name of the loop road scheduled to be developed as part of the BTR Park 2.0. The new 55-acre development is adjacent to the original BTR Park near the intersection of Drake Road and Parkview Avenue.

During the late 1990s when the BTR Park was first proposed, Jones was the mayor of Kalamazoo and a strong advocate for the project, which ultimately led to the generation of more than 800 high-paying jobs in the community at 42 private firms. As mayor, he made sure all opinions on the development were heard during the deliberation process, and then he garnered support for the park's creation.

Fifteen years later, when he was serving in the Michigan Legislature, Rep. Jones played a significant role in removing restrictive legislation on the parcel of land that will house the BTR Park 2.0, allowing the University to plan and now begin construction this year on the new development.

Jones, a chemist by profession, came to Kalamazoo to work for The Upjohn Co. After his retirement in 1997, he served for eight years as Kalamazoo's mayor and then was elected to serve as state representative for Michigan's 60th District. He was in his second term in that position when he was diagnosed with cancer. He died Oct. 17, 2010, at age 66.

Throughout his political career he was known as an advocate for the downtrodden and a promoter of local economic development.

"There was no greater champion for this community than Robert Jones," his friend and political successor Kalamazoo Mayor Bobby Hopewell said at the time of Jones' death.

For more information about the BTR Park, visit wmich.edu/btr.