Grammy winner to perform with jazz and symphony orchestras 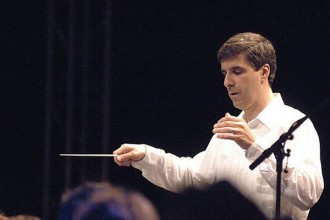 KALAMAZOO, Mich.—Six-time Grammy winner Vince Mendoza will visit Western Michigan University for a collaboration with the University Jazz Orchestra and University Symphony Orchestra in a concert of his compositions at 7:30 p.m. Wednesday, Feb. 21, in the Dalton Center Recital Hall.

One of the most versatile and prolific composers, arrangers and conductors of the last two decades, multi-Grammy Award winner Mendoza has written arrangements for a wide variety of pop and jazz artists, from Joni Mitchell, Sting, Melody Gardot, Elvis Costello and Bjork to Joe Zawinul, John Scofield, Charlie Haden, Al Di Meola, Dave Liebman, Randy Brecker, the Yellowjackets and the GRP All-Stars. As a leader, Mendoza has released 10 recordings for the Blue Note, ACT, Blue Jackel and Zebra labels, including 1997's Epiphany with the London Symphony Orchestra and 2011's Nights on Earth, featuring an all-star cast and members of the Metropole Orkest, which Mendoza has led as chief conductor for the past six years.

Mondoza was recently honored with a Grammy Award for his work on the John Scofield "54" album on Emarcy records. It is his sixth Grammy and 25th nomination. His other award winning works include "Travelogue" and "Both Sides Now" with Joni Mitchell, both of which are considered masterpieces by many critics and musicians alike. Mendoza is the chief conductor of the Metropole Orkest in the Netherlands.