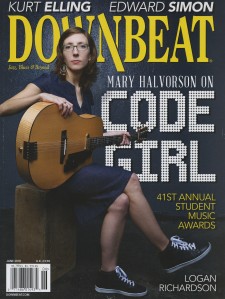 In what is regarded as the most comprehensive competition for collegiate jazz programs, WMU students earned two awards, placing among the top 10 finishers in the international music competition. No other Michigan universities brought home an award.

The two wins meant WMU tied with many major institutions for the most awards, including the Oberlin Conservatory, Manhattan School of Music, New York University and the New England Conservatory.

The DownBeat awards continue to be the most thorough and publicized metric for jazz programs across the globe, with the competition going international more than 10 years ago.

"WMU's jazz studies program has been earning awards in DownBeat's Student Music Awards for more than 25 consecutive years, and multiple awards for two decades," says Tom Knific, WMU professor of music. "Our institutional historic total is nearly 170. We're especially proud of this year's winners, as they were also among our four winners in last year's competition."

Several of this year's winning submissions from other schools came from students taught by WMU alumni who have gone on to obtain positions at some of the most prestigious music institutions in the country.

They include Christine Helferich Guter at the University of California Long Beach, who also received the 2018 DownBeat Magazine Jazz Education Achievement Award.