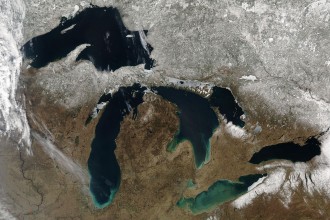 KALAMAZOO, Mich.—The magnitude of future warming in the Great Lakes region depends on choices being made today and that will continue to be made in the coming decade.

Dr. David Karowe, a Western Michigan University biologist, details two possible futures by contrasting what the region will look like by the year 2100 if countries choose to follow the Paris Agreement on climate change or to practice business as usual—replacing fossil fuels only slowly with smarter energy choices like wind and solar.

"Few studies specifically focus on the Great Lakes region," says Karowe, who researches global change ecology. "But drawing on those that do and global studies, we can make some confident predictions."

Under business as usual, wildlife, human habitation and economic mainstays like agriculture and tourism will look increasingly different as the century progresses. Summers will be much hotter and drier, extreme precipitation events will be more common, forest fires as well as flooding will increase, and deadly heat waves and algal blooms will spike.

Karowe stresses that the Great Lakes region is already warming markedly. If nations continue increasing renewable energy at their current slow pace, average annual temperature will increase by 8 to 12 degrees Fahrenheit, he says, while following the Paris Agreement will cut this warming in half.

The Great Lakes, particularly Lake Superior, are already warming at an alarming rate, he adds. The continued decrease in ice cover will result in increased evaporation from these water bodies, which will lead to more lake-effect snowstorms during the next few decades. Once the average winter temperature rises enough, though, more rain will fall because it won't get cold enough to snow. In fact, studies indicate that 90 percent of Michigan's winter precipitation will be rain in 2100 if warming isn't reduced.

"We'll also have more severe precipitation events. The likely frequency of a once-in-20-years rain event is every five years under business as usual and every nine years under the Paris Agreement," Karowe says.

"This trend toward greater flooding can be seen in places like Kalamazoo, which has had three once-in-20-years rain events in the past six years. Two of them were in 2017, which was the wettest year in Michigan's 123-year precipitation record."

In addition, he notes that the Great Lakes region is on track to see 70 to 100 percent of its summers being hotter than today's record hot summer. This percentage is expected to be between 10 and 70 percent under the Paris Agreement.

Many of Michigan's bird species won't survive a big uptick in temperature, Karowe continues. Unchecked warming will likely lead to 24 species declining by 80 to 100 percent during this century. That unhappy fate would be prevented for 14 of those species under the Paris Agreement, including the yellow-bellied sapsucker, red-breasted nuthatch and veery.

Other climate-change losers will be the state's cold- and cool-water fish. Warmer waters are fine for species such as carp and catfish, but can be deadly to sport fish such as trout and salmon.

Dramatic changes are also predicted for Michigan forests. Thirteen of the state's 20 most abundant species are predicted to decline by at least 50 percent under business as usual. Just nine species will decrease that much if the Paris Agreement is implemented, and iconic species like white pine and sugar maple will be among the biggest beneficiaries. 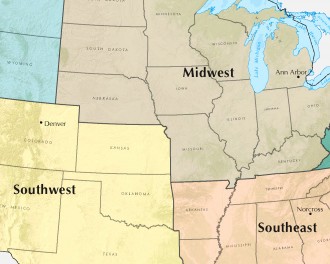 Overall under business as usual, Karowe expects 70 percent of the Earth's land surface and almost all of the Great Lakes region will be at risk of at least moderate biome change—changing from one major ecosystem type to a different type.

"If we follow the business-as-usual path, Michigan could end up feeling like Oklahoma in 2100," Karowe says. "But under the Paris Agreement, much less of our region and only about 25 percent of Earth's land surface will be at risk of at least moderate biome change."

For more about the Great Lakes region and climate change, contact Karowe at david.karowe@wmich.edu or (269) 387-5630. Additional information is available online: