KALAMAZOO, Mich.—Earth's average temperature is rising at least 10 times faster than at any period in the last 800,000 years, reports a Western Michigan University biologist who researches global change ecology. 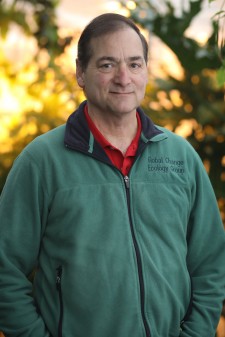 Dr. David Karowe says if warming is left unchecked, Michigan and other states around the Great Lakes won't feel like home in a few generations. By century's end, he notes, at least half of Michigan's iconic trout, salmon, white pines and sugar maples will probably die off. Meanwhile, the state's infamous lake-effect snow will be rare, making for mostly rainy winters.

The professor of biological sciences didn't need to learn about that projected future by reading the World Economic Forum's 2019 Global Risks Report released Jan. 16 or the Worldwide Threat Assessment of the U.S. Intelligence Community released Jan. 29.

A key way he's been doing that is by sharing his knowledge of climate change, both on his personal website and in numerous public presentations to groups across Michigan and nearby states. One of his more recent talks, "Effects of Climate Change on the Great Lakes Region," turns the spotlight on this important portion of the Midwest.

"I consider it part of my social responsibility to share factual information that matters to people and to share it in a way that's accessible to non-scientists," Karowe says. "The hope in giving a talk is that at every one, some people in the audience will act as conduits for this information to a wider audience."

Karowe acknowledges that the year 2100 sounds like a long time off. But he says people need to realize it won't be long before humans lose the ability to prevent the catastrophic consequences of climate change.

"The debate is over. Climate change is real—period," he says. "So unless we want a planet where no place feels like home, we really only have about a decade to start making substantial progress in slowing down warming." 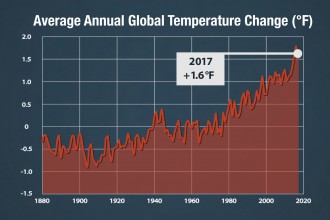 NASA provides an example of the urgency through a time-series progression of color-coded maps that display modern thermometer readings taken from around the world. Called Global Temperature Anomalies from 1880 to 2017, the video graphically shows Earth experienced moderate warming from about 1900 to 1940 and the planet has been warming dramatically since 1975.

Karowe says the Great Lakes region hasn't been immune. Temperature here has been climbing at about the same rate as the planet's—1 degree Celsius (1.8 degrees Fahrenheit) in a little more than 100 years, but the rate of warming has tripled since 1980. Moreover, the world has experienced three record warmest years since 2014. The year 2016 is currently the warmest, followed by 2017, 2015 and 2014. And 2018 will likely replace 2014 as the fourth warmest year. 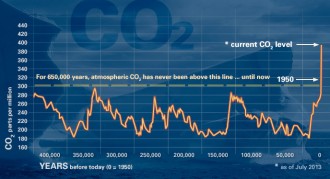 In addition, the amount of carbon dioxide in the atmosphere is also increasing at an unnerving rate. CO2 ranged from about 180 to 280 parts per million from 800,000 years ago until 1950, when it broke 300 ppm. This greenhouse gas now stands at about 408 ppm, Karowe says, and will be about 950 ppm by 2100 if the world follows business as usual—burning fossil fuels and only slowly adding in small amounts of wind and solar energy.

"The current amount of CO2 is higher than what Antarctica ice cores show has been in the atmosphere during the past 800,000 years. If we don't slow down emissions, the average global temperature will rise somewhere between 8 and 10 degrees Fahrenheit," Karowe says.

"Does 10 degrees matter? We don't know what Earth was like the last time it was that warm, because that was 55 million years ago. But we do know what it was like when the planet was 10 degrees cooler. That was 12,000 years ago and Michigan was under almost a mile of ice."

Karowe stresses that it takes thousands of years for the Earth to cycle through the movements that affect incoming radiation—100,000 years in the case of the time it takes the planet to complete one of its elliptical orbits around the sun. So, he says, that category of natural cycles can never change Earth's climate in the span of a mere century.

"Climate models indicate that natural factors, alone, would have caused the planet to cool slightly since 1900. In contrast, if the models include human influences such as greenhouse gas emissions and deforestation, they explain virtually all of the warming since 1900," Karowe says.

"So it's actually quite clear. Earth is warming because of us. There is a time for skepticism in any field of science. It's when you don't yet have the answers or when the evidence isn't strong enough. But we're well past the time when skepticism is appropriate in climate science."

Scientists can gauge how natural climate factors affect Earth's temperature because studying ice cores has allowed them to compile a near-annual record of global temperature for the past 800,000 years. That data is part of the reason Karowe says 97.5 percent of the experts—the climate scientists themselves—agree that climate change is entirely or mostly due to human activity.

"If ninety-seven and a half percent of cardiologists said, 'You shouldn't do this,' most people would just say, 'OK, I'm not going to do that,'" he adds.

The estimate is that about 80 percent of human influence on warming comes from burning fossil fuels while 20 percent comes from cutting down forests, especially tropical forests, which act as sponges pulling CO2 out of the atmosphere.

To avoid disastrous climate change, Karowe says the world needs to run as much as possible on electricity that's created from renewable energy sources. Right now, four-fifths of energy in the U.S. comes from fossil fuels. Notably, humans put the most CO2 in the air by burning oil, nearly all of it in the form of gas for transportation. Less than 10 percent of the nation's total energy comes from renewable sources, and of these, wind, solar and geothermal amount to less than 3 percent.

Karowe knows eliminating U.S. dependence on fossil fuels can't happen immediately, so he advocates adhering to the U.N. climate agreement the United States signed in Paris in 2015 but then withdrew from in 2017. The Paris Agreement has countries in the short term collectively limiting warming to 2 C and in the long term limiting warming to 1.5 C. 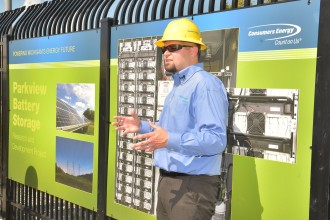 Each signing nation pledges action to lower its carbon footprint, with industrialized countries providing technical and financial assistance to help developing countries meet their pledges, and all nations periodically reviewing each other's efforts. It's hoped that together they'll ratchet up their efforts so greenhouse gas emissions will peak in a few decades and the world will produce net-zero emissions in the second half of the century.

"I think we can do a lot better than the Paris Agreement, but Paris is the stepping stone to a better future than business as usual. We need to get 80 percent of our energy from what are clearly smarter sources, and we have to do it by 2040. This is by no means an impossible task," Karowe says.

"You hear that we need an all-of-the-above approach. No, we do not. We need an all-but-fossil fuel approach. We've got multiple techniques that could replace fossil fuels many times over. And we have the necessary technology to produce electricity from these techniques, whether or not the sun is shining or the wind is blowing. We just have to choose to do it."

In the meantime, he says people should minimize the impact of their fossil fuel usage and engage with policy makers as well as organizations that promote green energy.

"We're living our lives in a convenient way at the expense of our children, grandchildren and great grandchildren," Karowe says. "That's not fair. We need to start very seriously switching from fossil fuels to renewables if we're going to leave a livable planet to future generations."

For more about Karowe and his work, visit his personal webpage. Direct questions to him at david.karowe@wmich.edu or (269) 387-5630. Additional general climate change information is available online: