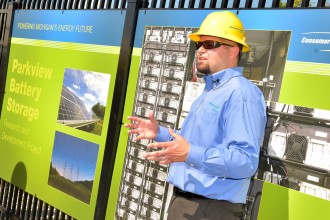 A banner at the event shows how the facility and its racks of batteries work.

KALAMAZOO, Mich.—Consumers Energy ushered in a new technology Sept. 17 at Western Michigan University by starting operation of a new large-scale battery that should store enough energy to power 1,000 homes at any time.

The event included a ribbon cutting for the battery facility, which is unique to Michigan and has been erected on WMU's Parkview Campus on the northwestern corner of South Drake Road and Parkview Avenue in Kalamazoo. Along with Consumers Energy employees who worked on the project, WMU President Edward Montgomery as well as local legislators and county commissioners participated in the event.

"Advances in battery storage technology have now reached the scale that they power entire communities on demand," Tim Sparks, Consumers Energy's vice president of electric grid integration, said before the event began. "Our Clean Energy Plan calls for more solar and wind electric generation facilities that will depend on battery storage to be dependable sources of energy for our customers for when the wind isn't blowing or the sun shining. The Parkview Battery Project begins the next groundbreaking chapter in the story about how clean and reliable energy reaches Consumers Energy customers."

The Parkview Campus was selected as the site for the new battery facility through a statewide search conducted by Consumers Energy in consultation with Michigan State University. In the coming year, the company and MSU consultants will study data generated at the facility to better the potential for battery storage use around the state. WMU engineering students also will have opportunities to participate in partnerships with Consumers Energy on electric battery research and operations.

The 1-megawatt-hour battery's output is about the amount of electricity used by approximately 1,000 residential electric customers in an hour. According to the U.S. Energy Information Administration, about 867 megawatt-hours of utility-scale battery capacity exists in the United States based on technology similar to the Parkview Campus battery. Large-scale batteries can support wind and solar plant electric production when declining winds and clouds reduce their output for short periods and could threaten their reliability.

"The foundation of all we do at Consumers Energy focuses on our Triple Bottom Line: people, the planet and Michigan's prosperity," Sparks said. "We are excited to launch this project and see how it will provide future benefits for our customers as we continue to develop responsible and environmentally friendly electric generation and storage facilities."

Consumers Energy, Michigan's largest energy provider, is the principal subsidiary of CMS Energy, providing natural gas, electricity or both to 6.7 million of the state's 10 million residents in all 68 Lower Peninsula counties.

Learn about utility-scale battery capacity in the United States online. More information about Consumers Energy's renewable energy programs, including a solar garden at WMU, is available on the company's website.

So far this year, WMU has earned more than $132,000 in energy efficiency rebates, an amount Consumers Energy recognized during the Parkview battery facility event by turning over a mock rebate check to the University.

In addition, Peter Strazdas, WMU associate vice president for facilities management, told the crowd that the University's energy savings have been substantial over the past two decades. In fact, he reported that WMU has increased its building footprint 17 percent over that time period, yet reduced its energy use per square foot by 26 percent.

Part of the reason for that has been greater reliance on renewable energy. For instance, Consumers Energy joined with WMU in 2016 to open its second solar power plant—an 8.5-acre array of solar panels on the Parkview Campus that produces enough electricity for 200 Michigan homes and businesses. The 1-megawatt solar power plant was the energy provider's second large-scale solar project in Michigan and the first actually located on a college campus.

As part of the project partnership, Consumers Energy contributed funds for WMU to construct a small, two-unit solar garden for use by faculty and students for research and to purchase Solar Learning Modules. The modules allow WMU to use the solar facility to educate WMU students, expose area K-12 students to solar energy, and train emergency first responders and other government and community groups in solar arrays and related energy systems.

Solar energy also is a major feature of WMU's Sangren Hall on the Main Campus. The building has 975 rooftop solar panels with a 1/4-megawatt annual output that satisfies a good share and at times more than 100 percent of the building's electrical needs during high peak import times.

In addition, WMU erected a 40-foot wind turbine in 2007 on the Parkview Campus. It was the first modern, direct-grid-connected, electricity-producing wind turbine in the Kalamazoo area and at the time, one of only a few such turbines in southwest Michigan.