KALAMAZOO, Mich.—Imagine going to a theater performance but not being able to see why people are laughing or gasping during the show. With the help of a Western Michigan University graduate student, a new program at the Kalamazoo Civic Theatre aims to fill in those gaps in experience for people who are visually impaired.

"Sometimes you need to know that the villain is watching from above, because it changes the story, and you wouldn't know that without being able to see or having someone tell you," explains AnnMarie Miller, lighting and sound designer at the Civic. 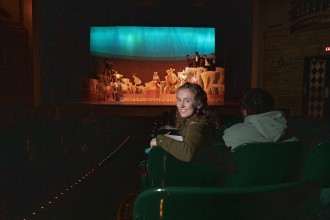 The theater started looking into audio description services at the suggestion of an audience member.

"We had a patron who frequents the theater who has visual impairments," says Miller. "Sometimes you don't realize what people need until they say it."

Miller researched the kind of equipment the theater would need to accommodate live audio descriptions and then she reached out to WMU. When she connected with Tongue, the pieces began to fall into place.

"Abby loves theater. She took several friends to see a show at Western last year and was the only one in the group that didn't have vision challenges," Miller says. "She said throughout the show, the audience would clap and make noises and her friends would turn to her and ask what happened."

"Understandably, the people behind us were not very happy with this setup, so it put us in an awkward situation, and I stopped describing for a while," she recalls. "Then my friends didn't know what was going on at key points, so it was this really difficult situation where there was this barrier to accessing the full enjoyment of the performance for everyone."

"That was a learning curve for me," Tongue says. "So, I met with one of my professors, who is blind herself, and she helped me prioritize what to describe and what not to describe."

Tongue, who studies both teaching children with visual impairments as well as orientation and mobility for children, also gained insight from her fiancé, fellow WMU student Osman Koroma, who is blind. She also tapped into resources from the American Council for the Blind.

Then, in December, she practiced her live audio description on the Civic's production of "Chitty Chitty Bang Bang."

"I attended dress rehearsal and we went through the entire performance during one of their shows to test out the equipment so I could get comfortable," she says. 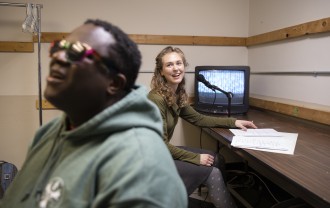 Tongue jotted notes on her script, paying close attention to the director's notes and any other points in the play where she could help convey the plot or emotion.

"I think as sighted people, we don't get that feeling of confusion as often as someone who is blind trying to put together the pieces of what's funny or what's going on," Tongue explains. "So, as an audio descriptionist, you want to relieve some of that (confusion) without stepping on the toes of the actors."

During the performance, Tongue sat below the stage, watching a live stream of the show and delivering her descriptions for patrons wearing special headsets.

"The people in the audience were really excited about it and said it helped them understand things better and gave them a fuller picture of what was going on," Tongue says.

Miller says the Civic used feedback from the audience to enhance the experience at future performances.

Audio description services will be provided during two upcoming shows this season:

The Civic plans to provide live audio description during one performance of every show next season, just as it does with sign language interpretation.

"One of our goals is making sure the theater is accessible to everyone, whether that's from the patron's side, from the volunteer side or from our performers' side," says Miller. "So, we've really been trying to reach out and be open to the community when they bring us ideas.

"We would love to continue working with WMU students as audio descriptionists."

Tongue says she's excited to volunteer and continue to grow her skills as a visual descriptionist with the Civic.

"I think it's absolutely fantastic. I'm just really hopeful in the years to come this program will grow and people who are blind are able to go to the theater just because they want to, without having to arrange for other services to be in place."

Western Michigan University's Department of Blindness and Low Vision Studies is the oldest and largest program of its kind in the world. Since 1961, it has been preparing students for work in the growing fields of rehabilitation teaching, counseling, teaching children with visual impairments, and orientation and mobility for persons with blindness and low vision.