KALAMAZOO, Mich.—Eddie Codrington is ready to take his band on tour. He's got the chops, and now he has the ears of the national jazz community.

The ASCAP Foundation recently announced Codrington, who earned a bachelor's degree from Western Michigan University in jazz studies and is now also pursuing his master's at WMU, has received the 2019 Herb Alpert Young Jazz Composer Award. The award recognizes the most promising jazz artists under the age of 30 from across the country. Only 18 musicians were chosen.

Codrington says when a representative called to deliver the news that he'd won, "I probably seemed a little distant because I was on my way to a concert here at Western and I was focused on that."

After the concert, the gravity of the award sunk in.

"This is a great honor. It is a very competitive, juried competition," says Rathbun. "We talk a great deal about composition in our lessons, and it is wonderful to see some payoff from those discussions."

Codrington won the award for the composition "Obsidian Galaxy," which he collaborated on with WMU's Advanced Jazz Ensemble and Dr. Christopher Biggs, an associate professor of composition.

In addition to playing in the ensemble, Codrington is also part of WMU's award-winning Jazz Orchestra as well as a band called Lushh, which he formed with some classmates. The band will soon release a full-length album and is preparing to go on tour. Codrington hopes this award will help his band get some recognition, as well.

"We're working hard so when we've all graduated this can become a full-time thing." 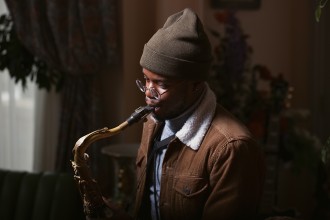 "Eddie is the best type of student, in that he is curious. He is always searching for the next thing, the next idea--both in his playing and in his writing," says Rathbun. "It's my job to try and facilitate his growth, answer his questions and assist him on his journey to become a full-fledged artist."

Learning from the Best

WMU is recognized for having one of the top jazz studies programs in the country. One of the reasons is the world-class faculty. Codrington, who is from Ann Arbor, says it's a big part of why he came to the University.

"There are a lot of heavy hitters at Western," says Codrington. "All of them are self-realized as musicians. They offer a variety of things we can take from them." 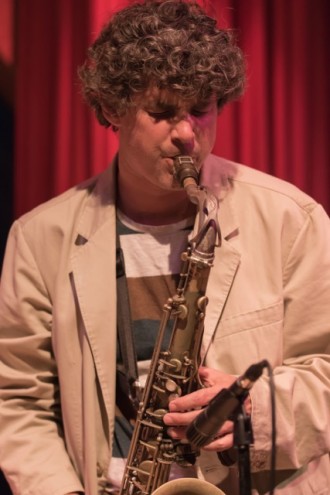 Andrew Rathbun was nominated for a JUNO Award for best jazz album.

One of Codrington's mentors at WMU also recently received international recognition. Rathbun's album, "Atwood Suites," was recently nominated for a JUNO Award for best jazz album. The JUNO Awards are billed as "Canada's biggest night in music," celebrating and recognizing the best Canadian music and artists.

"It was very exciting. It was my first nomination," says Rathbun. "The big event was a great deal of fun. It was much larger than I imagined it would be."

Rathbun says "Atwood Suites" was a huge endeavor, employing several musicians to create a two-CD set of music. It was also supported in part by a WMU Faculty Research and Creative Activities Award grant.

"I am so grateful that the University supports these types of projects," says Rathbun.

The Jazz Studies Program at WMU has gained international recognition for its innovative approach to jazz education. Graduates of the program are among today’s leaders in jazz and pop performance, Broadway, recording studio production, writing, arranging, singing, and music education.