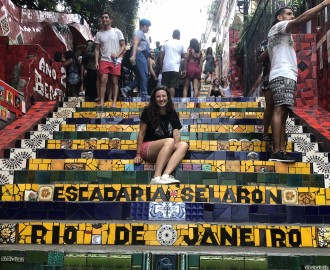 Caitlin Wiley's studies at Western Michigan University have taken her on countless adventures across Latin America. And they're now a spring board to her next adventure: public service.

Wiley is wrapping up a year in Brazil after receiving the prestigious Boren Scholarship.

The $20,000 grant is awarded by the National Security Education Program to students committed to studying languages critical to national security that are less commonly taught in the United States.

"I started the application process in 2017 and didn't hear back until April 2018, two weeks before I was supposed to graduate," recalls Wiley. "So I kind of changed my plans."

Accepting the scholarship meant Wiley would extend her studies at WMU to a fifth year.

Wiley is earning degrees in Spanish as well as global and international studies, but she did not have any background in Portuguese before receiving the Boren award. She did some basic studying in Waldo Library before she left and then hit the ground running in Brazil with a month of intense language courses through the University Studies Abroad Consortium.

"I actually was able to learn enough in just the first few weeks living with a host family and practicing with people I met … to skip over the beginner Portuguese classes," says Wiley. "Immersion has helped so much. 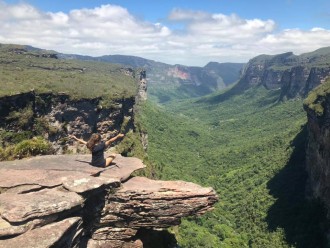 Boren applicants have to demonstrate how their area of study relates back to national security. Wiley focused her application on food and environmental security.

"Brazil has an enormous agricultural production capacity. It's one of the top five food-producing countries in the world," says Wiley. "The agricultural industry is also one of the only industries in Brazil that experiences regular growth, and it has a significant impact on the political climate as agribusiness interests regularly lobby the government."

While she lives in Florianopolis, on the southern coast of Brazil, Wiley has been able to see the impacts of aggressive development firsthand during her travels across the country.

"Instead of making better use of the land already available for crop growing and cattle raising, natural habitats like the Amazon rainforest are constantly being clear-cut to provide more space for these activities." Wiley says that's a threat to U.S. national security, as well as international stability, because "the health of the Amazon is crucial for clean air and global health."

Wiley says in addition to learning Portuguese, her study abroad courses are also teaching her about things like natural resource management and agricultural development. The knowledge could be crucial as she transitions to a career in government service. 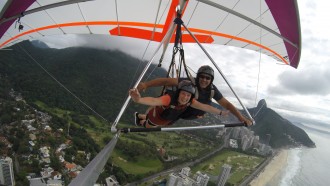 Boren Scholarship recipients agree to work for the federal government for at least one year after graduation in exchange for the funding.

"It is an obligation, but it's something that I wanted to do anyways, and having all these extra resources to help find a job and market the amazing language skills I've had the chance to develop over this year … is great." says Wiley. "So, it's given me a lot more confidence."

Wiley, a Fenton native, says she heard about foreign service when she was in high school and caught the bug.

"They were describing it like, you live abroad, you work for the U.S. government, you help to facilitate relations between Americans and people all over the world to really enhance the knowledge base," says Wiley. "It was literally one of those lightbulb moments."

Wiley hopes to land a job in the U.S. Department of State. The Boren Scholarship will give her a leg up on many other applicants.

"Government entities can fast-track your hiring because you've already gone through the process and they're bringing in someone who has these skills abroad," says Michelle Metro-Roland, the director of faculty and global program development at WMU's Haenicke Institute for Global Education.

Wiley says her experiences at WMU also set her up for success.

"If I hadn't had professors who encouraged me, who said, 'you should go experience the world,' I wouldn't have done a lot of those things," says Wiley. "I reflect on the experiences I had at Western and I'm so thankful that I had so many people helping me along the way."

She encourages other students to step out of their comfort zone and study abroad. Wiley enjoyed experiences in Argentina, Costa Rica and Brazil during her time at WMU.

"You learn so much about yourself as an individual when you study abroad," says Wiley. "In Argentina I changed completely over the course of a semester. Now in Brazil … I'm a completely different person from when I started."