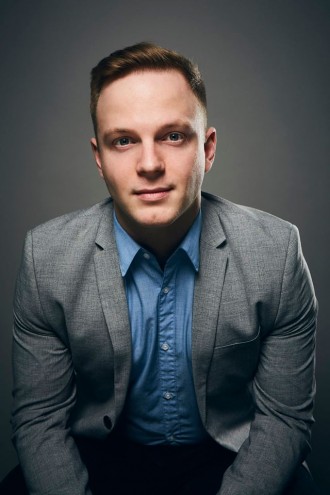 LOS ANGELES—A Western Michigan University alumnus who crafted a career behind the curtain is in the spotlight now for his work in theatre. The Los Angeles Drama Critics Circle recognized Joshua Reid for excellence in sound design in its annual awards on April 13.

The Rochester, Michigan, native earned the recognition for his work on an adaptation of "A Christmas Carol," directed by Tony Award nominee Michael Arden and featuring Tony Award-winning actor Jefferson Mays.

"It was quite the surprise and honor to win this award," says Reid, who graduated from WMU in 2010 with a bachelor's degree in theatre design and technical production. "I've had nominations before, but this is my first major win. I'm so extremely grateful for the opportunity."

The show, performed at the Geffen Playhouse in Los Angeles in October and November 2018, put a unique spin on the Dickens classic—turning it into a one-man show.

"The sound design for this production was extremely intricate and was composed of many overlapping layers, incorporating soundscapes during scenes, musical transitions and live vocal processing and effects to help give our actor more depth and vocal range as he transitioned between the more than 80 characters in the show," Reid says.

"Because this production is one performer interacting with the sound environment that's around him, it gave us an opportunity to make sound design an additional character on stage. In an 85-minute show, there were more than 600 sound cues to add depth to the production."

Reid doesn't have much time to savor his award; he's busy working on productions all over North America. Most recently, he was in suburban Chicago laying the groundwork for a developmental production of "August Rush." He's also helped out with two nationally touring productions that took him to Arkansas, Texas and New York, as well as designed productions of "Girlfriend" in Hartford, Connecticut, and "Billy Elliot" in Calgary, Alberta. And that's just in the past few months.

"My working environment changes every few days or weeks. While this can sometimes be physically exhausting, it is mentally stimulating," says Reid. "Each production and each theater has its own set of unique challenges, but that also leads to creative opportunities."

Creativity is something Reid cultivated in the theatre program at WMU.

"Theatre professors at WMU always enforced that students should come up with a creative idea first and be able to justify its role in the production to other team members before working out any technical elements or possible restrictions," Reid says. "The philosophy was crucial in laying the foundation for my design career, as it forced me to think critically and creatively about design ideas and elements."

While it can be a difficult industry to break into, Reid offers advice to other students hoping to find success in theatre.

"Be ambitious, work on communicating effectively and develop relationships with everyone around you. Theatre is very much a freelance industry, and it is a personal choice whether the people you are working with will help or hurt your future aspirations."