Take the WMU Transportation Survey here through Friday, May 10.

KALAMAZOO, Mich.—Walking, biking and parking are just some of the factors stakeholders say Western Michigan University should consider as it moves forward with developing its first comprehensive transportation and mobility master plan.

That sentiment was among the numerous issues and ideas more than 100 campus and Kalamazoo community members shared during interactive open houses on the plan held April 3 and 4, the same time period WMU launched a 10-minute, anonymous survey that will collect input on the plan through Friday, May 10. 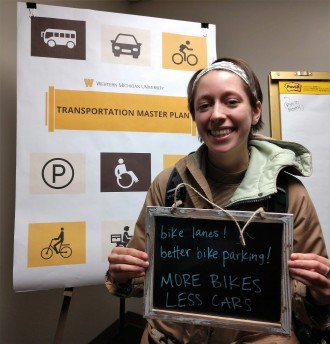 Open house attendees were given various ways to communicate their issues and ideas, including through this photo booth.

Both the WMU Transportation Survey and open houses will be used by Nelson/Nygaard, a firm recognized internationally for its expertise in the field of campus mobility, to create WMU's transportation master plan.

"During our open houses, we were able to meet with a wide variety of stakeholders who talked at length about their experiences getting to and around the Main Campus," says David W. Dakin, WMU director of planning, space management and capital projects. "We learned a lot. And I'm confident that the ideas, concerns and other information we received will help us build a well-thought out transportation plan that is serviceable for many years to come."

Facilities Management's campus planning unit invited stakeholders to attend the open houses and encouraged them to discuss their vision of transportation and mobility on campus. Attendees were able to weigh in by telling WMU about their needs and concerns and prioritizing what they would like to see the University implement.

The top eight priorities expressed, in descending order, were:

A leading theme that emerged during the interactions between stakeholders and representatives from campus planning and Nelson/Nygaard is that there is a feeling of optimism about what the improvements to WMU's South Neighborhood, now named Hilltop Village, could mean for the on-campus community and adjacent off-campus residential areas. 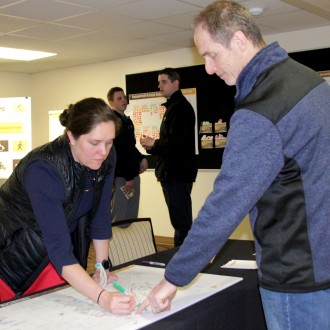 Numerous stakeholders agree that accessibility for people with disabilities should be a key focus as improvements are made to buildings, sidewalk and roadway infrastructure, and shuttles and buses. And if greater on-campus density is desired to increase the vitality of the campus, steps should be taken to reduce the impact of surface parking lots and the need to develop greenfield sites.

"Our main concerns really emanate from feedback from our neighborhood over the years. One is, how do we get safe, efficient access to Western's campus and the downtown area for nonmotorized transportation?" Kushner said at the April 4 open house.

"Stadium Drive is just built for traffic. So wouldn't it be great if we could narrow that and get some...pathways for biking, walking and handicapped people? I think it's our job to point out how we can help Western and how Western can help us. We all have to keep listening and working together."

What other people said

Another theme that came out of the open houses was the understanding that conflicting priorities and user needs put a strain on the parking and mobility system, leading to more driving and congestion and lower use of nondriving options. Many attendees also noted that there is a strong desire to ride bicycles, scooters, skateboards and the like, but there are few dedicated or comfortable routes to campus from surrounding areas. In addition, the on-campus environment and regulations are unclear about shared-use pathways.

WMU staffer Larry Flynn, who manages the University's smaller on-campus cafés, has delivery trucks on the road from 7 a.m. to 6 p.m. Flynn says the main issues he thinks about are congestion, safety and parking.

"I employ student drivers. I'm always worried about their safety. Along that Ring Road you've obviously got buses, maintenance vehicles, regular staff and whatnot using that as a mode to get onto campus. So there's steady traffic throughout the whole year, especially in the Valley area in August during student move-in," he said, noting that he also had a personal reason for attending the open house.

"I currently work out of Draper/Siedschlag, and that building is not long for this campus. I will be moving my office to Valley II, that's why I'm very interested in traffic and mobility around there," he said. "I've been here for 10 years now, and there's a lot of changes going on. I just like to be informed and if I can, have some input. I think the input from staff members and faculty along with students is important." 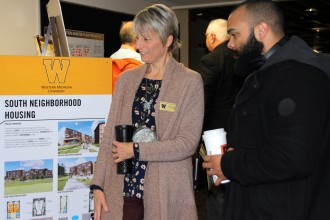 Not surprisingly, parking issues primarily influenced some students to participate in the April open houses. They included, Chris Proctor, a doctoral student in mechanical engineering who earned his bachelor's and master's degrees from WMU and has been a student here since 2011.

Proctor said he often finds getting back and forth to the Parkview Campus and Main Campus is problematic because the buses stop running before he is ready to leave Parkview, particularly during the long days engineering students must put in near the end of each semester.

He also says that once on Main Campus, getting to the library and other places he needs to be is fairly unappetizing if you have to walk up and down West Michigan because Parking Ramp 1 is full or to trudge through deep snow during negative 10-degree weather.

"So, really, the idea that we might revamp parking is very exciting because in Michigan we have six months of winter," Proctor said. "I know campus is trying to bring in more students and even talking about bringing in more community members. But the thing is, because our campus is so dense, you almost can't avoid having to park on the outer edge and walk all the way back."

Proctor's comments relate to three additional major themes that came out of the open houses:

Next steps in the process

The transportation master plan, which will address bus routes, walkability, bike usage, parking and many other issues, is focusing on the Main Campus as well as its connectivity to the East Campus, Parkview Campus and aviation site in Battle Creek.

It is being developed under guiding principles established by the University's Campus Master Plan, especially as that plan relates to the Hilltop Village sub-campus master plan. 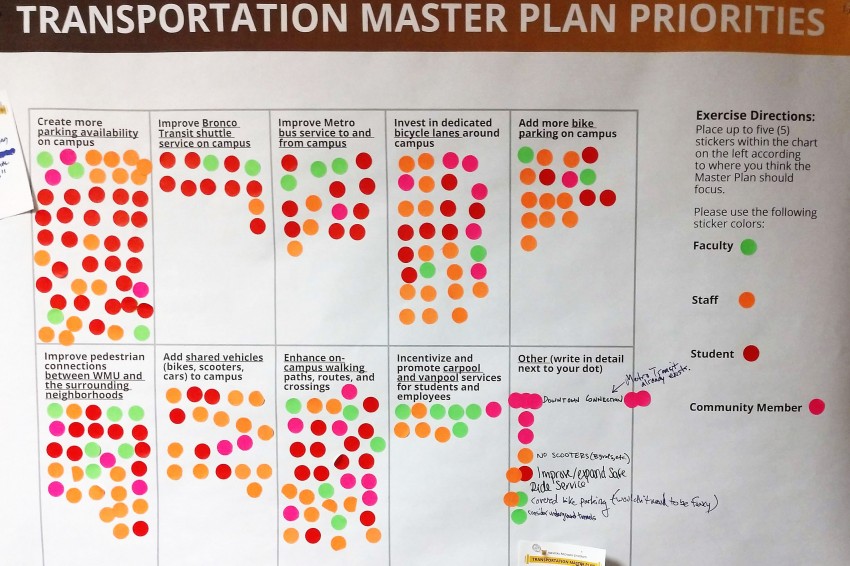 Dakin notes that extensive outreach and more than a year's worth of input gathering went into production of the latter document. He says next up in the transportation plan's development will be scheduling additional input events in early June that will be coordinated with WMU's hosting of the sixth annual Summer Conference on Livable Communities that is set for Thursday and Friday, June 6-7.

Then during summer II, feedback collected from those events, as well as the survey and April open houses, will be incorporated into the plan.

"We'll do a thorough study of all of the information we receive and use it as much as possible to tailor the transportation master plan," Dakin says. "The finished document will be presented to the campus no later than this coming September."

Campus planning has been engaging with numerous on- and off-campus people and organizations as part of its ongoing data-collection process. Focus groups or sidebar meetings already have taken place with area transit and government leaders, WMU student leaders, most of the University's bargaining and nonbargaining employee groups, and a broad array of nonacademic campus units.

To access the WMU Transportation Survey, go online or visit #WMUBuild on Facebook. Learn more about the master plan by clicking the Parking and Transportation Study link on WMU's Capital Projects webpage. Direct questions to Dakin at david.dakin@wmich.edu or (269) 387-8543.