Western Michigan University isn't sitting on the fence now that the academic year is over. Instead, a few more fences have been erected as improvement projects heat up for the summer. 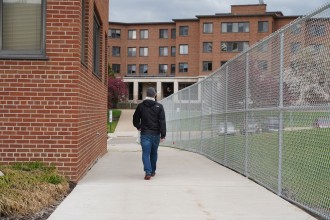 The most noticeable work is being done in the South Neighborhood, now named Hilltop Village. The comprehensive redevelopment of this area currently involves two multi-year construction projects: the Arcadia Flats housing complex and a student center that will include a contemporary dining facility.

Both projects kicked off last year with demolition of the Elmwood Apartments as well as the southern wing of McCracken Hall. Nearly all of that area has been fenced off since then while work on Arcadia Flats progresses. Meanwhile, permanent fencing went up April 28 around a large area encompassing McCracken Hall's footprint.

"The good news is that Arcadia Flats is on the edge of Main Campus so it's causing minimal disruption. People can still drive around the area, and we're not anticipating any Loop Road closures," says Peter Strazdas, WMU associate vice president for facilities management.

"But I see two impacts with the student center. First, we fenced-off Lot 28, the Waldo Library Parking lot, right after spring commencement. And the lot will remain permanently closed after the new center is built. Second, the blocked-off area is massive, so people walking west won't be able to cut through. They'll have to walk around the Seibert Administration Building or one side of Waldo Library." 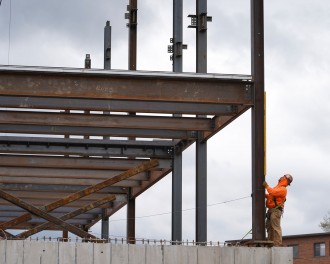 Truck traffic and other construction-related activities are causing little disruption in the Arcadia Flats area. Use of Moore Hall and the Ernest and Smith Burnhams Residence halls should not be significantly affected by the project. And despite some parking lots in the area being used by construction trailers for the duration of housing project, the majority of parking along Arcadia Loop will remain open, as will the Ring Road and adjacent sidewalk.

The other major project, the student center, is gearing up with the demolition of McCracken Hall's remaining wing, which will continue through the middle of August. McCracken was constructed in 1949 and is the oldest building on the Main Campus. Alternate pedestrian routes as well as handicap parking areas for the duration of the demolition have been identified and are posted online.

"With capital projects that take over two years, there is no best-of-year time to do them. In Michigan, there's two seasons, there's winter and there's construction. We survived the multiple years that it took to take down Sangren Hall and build new Sangren, and we'll survive taking down McCracken and putting a new student center there," Strazdas says.

"And when people come back after being gone for four months this summer, their jaw will hit the floor when they see how far along Arcadia Flats will have come. The building skeleton will be up, and they'll see this large, six-story structure." 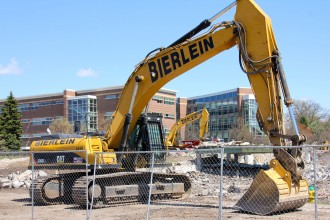 Razing the AT Building provides a new view of the College of Health and Human Services building.

A less noticeable building takedown occurred in April on the East Campus behind the College of Health and Human Services building. The Activity Therapy Building, constructed in 1916 and empty since last year, was razed. Cleanup of the site is continuing through May, and plans call for the area to be converted to green space.

WMU had acquired the AT Building in 1998 from the state, which used the structure for Kalamazoo Psychiatric Hospital programming. Most recently, WMU had used it to house the ROTC program, now headquartered in an addition to the Campus Services Building, and Surplus Sales, now located at 635 W. Ransom St. in Kalamazoo.

A key indoor project taking place this summer is the renovation of Waldo Library's first floor. The library will remain open during this work, but most of the first floor will be closed. The project began April 29 and will continue through Tuesday, Aug. 27.

"This project will pull together all of this work and make our heaviest trafficked floor an inviting, fresh space for students to study, meet with groups, access technology and experience everything the University Libraries has to offer."

The Bookmark Café that opened on Waldo Library's first floor March 21 is closed for the summer due to the renovations. The main entrance to Waldo Library and the service desk on the first floor will remain open. However, sections of the library's print collection (call numbers N and P) will be unavailable during the project. Library users are encouraged to use interlibrary loan services to borrow items that are temporarily unavailable.

The majority of the print collection, along with computer stations as well as collaborative and quiet study spaces, will continue to be available on the library's lower level and second and third floors.

• An electrical cable to be laid under Cass Street and Oliver Lane will impede motorists starting Monday, May 20, through the week of June 19. The project will require only intermittent lane closures.

• Paving and maintenance work related to parking will again be taking place around campus. Lots scheduled to be closed for a few weeks while this work is done include the Sindecuse Health Center's lower lot, Lot 51, and upper lot, Lot 40; Spindler Hall's Lot 12; and the Physical Plant's Lot 6. In addition, staggered closures of both parking ramps will occur.

• Although a city of Kalamazoo rather than WMU project, the sidewalk along the east side of Howard Street will be extended from West Michigan Avenue to Stadium Drive, possibly in July and August. A specific timeline for the project and notification of any Howard Street lane closures will be received closer to the start of the project.

A campus map showing all of this summer's projects is available online. This and other posted material may still carry the South Neighborhood rather than Hilltop Village name.

To watch Arcadia Flats take shape this summer, visit the South Neighborhood Redevelopment webpage and check out the live video cam. The page also has links to related time-lapse videos of interest.

For more information about WMU's major ongoing projects this summer, visit the Capital Projects webpage. Site logistics plan maps of fenced areas associated with Arcadia Flats and the new student center are available by clicking South Neighborhood Housing or Student Center and Dining Facilities, respectively, and scrolling to the bottom of each page.