Camp for blind and visually impaired athletes breaks down barriers 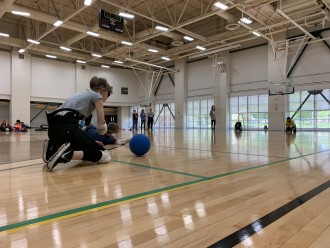 KALAMAZOO, Mich.—A rubber ball thuds on the ground, followed by a metallic clanging that fills a silent gym. Young athletes crane their heads to follow the noise, before one scoops up the ball and hurls it across the court at the opposing team.

In a synchronized sprawl, three athletes dive toward the jingling noise as they try to defend their net, which stretches the width of the court. Teammates on the sideline wait in anticipation to hear if the ball slipped past their outstretched fingertips.

Players on the sideline jump for joy. The player who threw the ball claps. None of them, however, saw any of the action on the court. 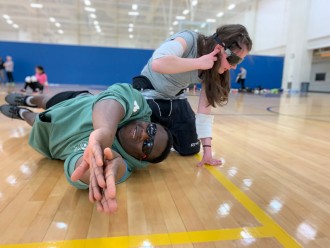 They're playing goalball; a sport created by visually impaired athletes. Every person on the court is blindfolded, relying on their ears to guide their movement.

The camp, sponsored by WMU and the Michigan Blind Athletic Association, offers young athletes a chance to discover their athletic potential and learn how to adapt sports so that they can participate when they return to their own communities. It's one of the many events more than two dozen athletes tackled during the Michigan Sports Education Camp at Western Michigan University.

"Our philosophy is we take students with visual impairments from the sidelines to the goal line," says Leann Ford, a co-director of the camp.

A PLACE TO GROW AND THRIVE

Dr. Paul Ponchillia, emeritus professor of blind rehabilitation, and his late wife, Professor Susan Ponchillia, started the sports camp with colleagues in the University's internationally renowned Department of Blindness and Low Vision Studies in 1988. Historically, children who were visually impaired or blind were educated in state residential schools. In 1975, however, the Education for the Handicapped Act was passed, requiring all public schools to provide students with disabilities equal access to education.

While studies show students with visual impairments thrive when given the chance to interact with their sighted peers, Ponchillia says the law also created new challenges. Many schools did not have a staff of physical education, art and other elective instructors with the expertise to teach blind and visually impaired children. 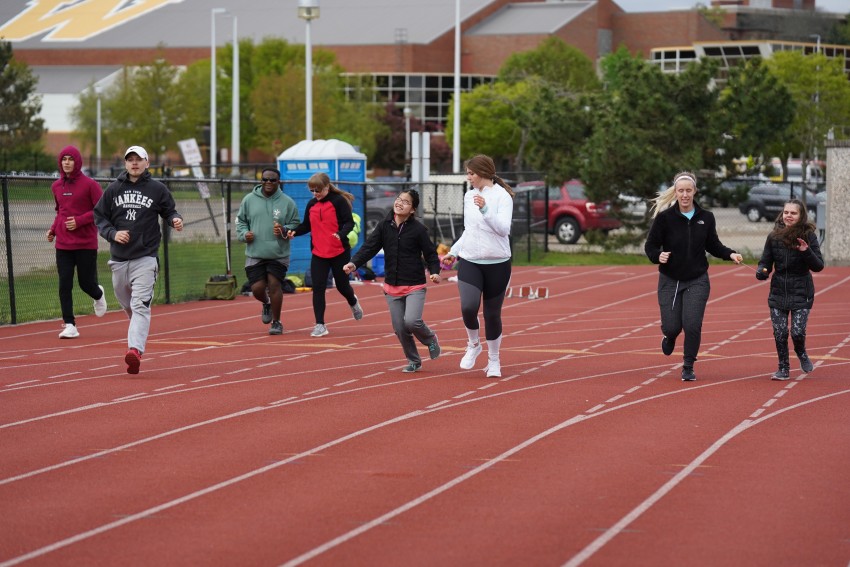 Camp counselors run beside visually impaired athletes, holding tethers to guide them around the track.

"The kids ended up getting left out of things that were kind of outside the normal curriculum and being part of the whole group," says Ponchillia. "Sports and art are self-image builders, things that sort of make you fit. In those days there wasn't any way to do that because even the teachers didn't know how to do it. So, we started this camp in 1988."

Ponchillia says the camp received help from special education teachers at schools across the state. Students in WMU's Department of Blindness and Low Vision Studies also got the opportunity to practice what they were learning.

"When we first put this together, most of us thought we were going to educate kids who get left out of sports and physical education so that they have the vocabulary to go back and talk to their friends about it—things like what a shot put is and how someone completes the high jump," Ponchillia says. "Every year we do a pre- and post-interview and test skills before and after camp, and I was totally shocked to find that every year these athletes jump farther, throw farther and, most importantly, their attitudes change.

"We ask them questions about whether they think they're a good athlete or if they're as good an athlete as other kids at their school, and that changes from the time they come until the time they leave." 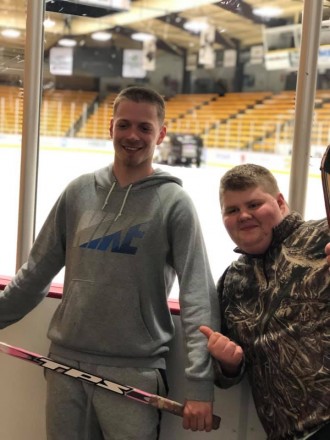 "When the students get to camp, it may be the first time in their lives that they realize that they are not alone," says Bob Brauker, camp co-director and also a former athlete at the camp himself. "The transformation is magical."

That sentiment is echoed by the athletes who come back to camp year after year and then go on to become volunteers.

"It's kind of like paying it forward," says Chaz Myshock, a counselor from Sterling Heights. "I enjoyed this camp for so many years, the least I can do is come back and be a counselor to help everyone out."

Myshock's enthusiasm for sports is undeniable. He grew up in a hockey family and has been skating since he was 4 years old.

"I had full eyesight until I was in fifth grade," says Myshock, who continued to compete in sports until high school. "It was just too much trying to keep up with the puck that I had to stop. Then I came to sports camp one year and they had blind hockey. Ever since then I go to every hockey session. I have fun with the kids and help them."

Fellow counselor Kristen Hale, who grew up in Warsaw, Indiana, shares Myshock's passion. Now 34 years old, she was just 10 the first time she stepped onto the WMU campus for Sports Education Camp.

"I had a total retina detachment at 9 years old," says Hale. "I no longer had depth perception because I didn't have vision in one eye. When I finally got a visual impairment teacher at my school, she was a recent graduate of Western's blindness and low vision studies program. She brought me and three other people from my county up to experience camp."

It gave Hale a chance to feel like part of a community; something she longed for since she lost her vision.

"We all have different levels of visual impairment or blindness, but it's the first time you're experiencing these things with other people who have the same challenges as you," Hale says. "Whether it's stairs or something else, it's just fun to be around people. You finally don't feel like the odd person here."

Josh Harrington, a teacher consultant for the visually impaired, also has deep roots with the camp. The Lawrence native started attending when he was 8 years old after being recommended by his uncle.

"He was involved with camp when he was a kid, and as I grew up, he wanted to make sure that I got some of the same opportunities that he did," Harrington says. 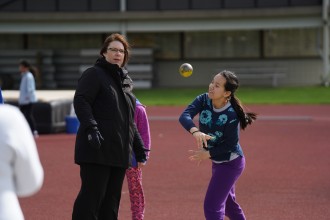 An athlete throws the shot put.

Harrington and his uncle both have retinitis pigmentosa, a progressive condition that takes away vision over time.

"Growing up in a small town … I didn't really have any connections outside of family to visual impairment," Harrington says, "Coming to camp was my first experience with other people who were blind or visually impaired of my own age."

Over the years, Harrington emerged as a leader and developed a passion for helping his friends at camp. He eventually enrolled at WMU where he earned a bachelor's degree in elementary education and master's degrees in teaching children with visual impairments as well as orientation and mobility. Now an adult, Harrington is inspired by the athletes he works with at camp.

"To be able to come to a camp like this and learn all of these skills and how to adapt things that their physical education teacher is doing, and to be able to bring it back to their school to help those teachers do it is empowering."

The impacts of sports camp stretch far beyond the track or hockey rink.

"You not only learn sports here, you learn independence," says Hale. "We stay in dorms here on a college campus, so learning how to be without your parents and navigate campus was a really good thing. It helped me feel really comfortable that when it was time to go off to college, I would be ready."

"As a parent you have to learn to let go," says Tina Sabel, who travels from Wisconsin to bring her daughter to camp. "The hardest thing is to make them do things for themselves, and they learn all of that here, which is a huge thing."

Establishing independence could be life-changing for these kids. According to the American Foundation for the Blind, the employment rate for people with visual impairments is only about 35%.

"It's really obvious when you look at the volunteers at camp," says Scott Ford, a camp director. "Bob (Brauker) is a former athlete. He's now a camp director and a lawyer. The manager and operator running goal ball this week are former athletes who've gone on to work at the United Nations and as a project manager for General Motors. Our athletes go on to excel and be leaders, not just in the blindness community." 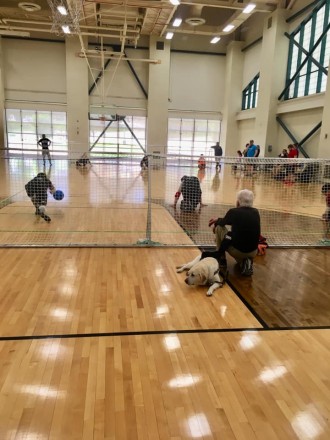 Paul Ponchillia, with his dog, kneels down to watch a game of goalball.

"I worked at the Veterans Affairs office in Birmingham, Alabama; it's a huge clinic with dozens of professionals working there," says Brauker. "Hanging right in the center of the building is a picture of Paul and Sue Ponchillia. They're just so highly respected around the country in the field, and it comes directly from this University. The support we get is pretty awesome."

WMU's Department of Blindness and Low Vision Studies is the oldest and largest of its kind in the United States. Research completed by faculty and students is lauded around the world—including a book focused on the skills taught at camp.

"A lot of the research for the book we wrote, Physical Education and Sports for People with Visual Impairments and Deafblindness, was done through the sports camps," Ponchillia says.

Every year the camp brings several practicum students on board from WMU's Department of Blindness and Low Vision Studies. Lexi Theis is wrapping up her second year at camp.

Theis is working on a master's degree in teaching children with visual impairments. "Camp allows me to use strategies I've learned in the classroom in real-life situations," she says.

Theis, who grew up in St. Charles, Missouri, says she first became interested in the blindness and low vision studies field while earning her undergraduate degree in elementary education at another university.

"I was placed in a first-grade classroom with three students who were blind," Theis says. "This was my first experience ever working with anyone with a vision impairment. I was so inspired by their love of life that I knew I wanted to see what this field had to offer."

After researching graduate programs, Theis says she chose WMU because it "had a reputation for being the best." The opportunity to work with athletes at camp is an added bonus.

"They're all so ready and willing to learn, so when they master a skill, it's the most awesome feeling!" says Theis. "These athletes come in feeling timid, like they do not belong and cannot do what their peers who are sighted can. They leave feeling confident."

And directors are confident the camp will continue touching lives for years to come.

"It is truly inspiring watching a kid who has never competed before race to the finish line while his buddies cheer him on," says Brauker.