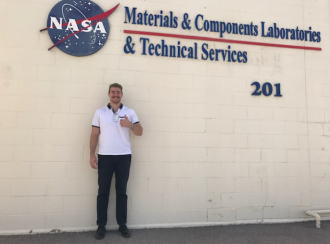 Jacob Ganzak outside of the Materials and Components Labs in Las Cruces, New Mexico.

"My ultimate goal is to become an astronaut," says Jacob Ganzak, who took a giant leap toward that goal by securing multiple internships at NASA.

From testing shields on oxygen tanks headed for space to working on launch towers for space shuttles, Ganzak was granted access to projects few college students ever receive.

"It's probably the coolest job for a student still in college, or for anyone for that matter," says Ganzak, who graduated in April with a bachelor's degree in aerospace engineering.

As an upper level student in 2017, Ganzak found himself looking for ways to stand out in the competitive engineering field. After hearing about a colleague's experience doing research for a NASA consortium, the Fenton native got to work himself.

"I thought, why haven't I been trying to find a NASA internship? I'd been looking locally and decided to try for the 'big dog,'" says Ganzak. 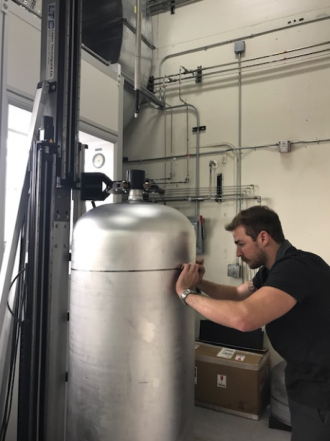 Ganzak conducts an outer diameter measurement on an aluminum liner at the White Sands Test Facility.

Through the Universities Space Research Association, Ganzak began to explore his options. He soon received a call from NASA's White Sands Test Facility in Las Cruces, New Mexico, where the space agency tests and evaluates potentially hazardous materials. Ganzak started his internship as a nondestructive test engineer in June 2017, the only engineering intern accepted at the time.

"For my first internship, it was kind of nerve wracking," Ganzak says. "But that's the best way to learn—to get thrown into it."

The bulk of Ganzak's research at White Sands involved testing composite overwrap pressure vessel liners. They protect tanks that carry oxygen and nitrogen to astronauts at the International Space Station. Using lasers, Ganzak and other engineers tested the liners for imperfections and defects that could impact their performance.

"It has to be very rigid to hold the pressure," says Ganzak. "If the liner itself isn't rigid, it could blow up." 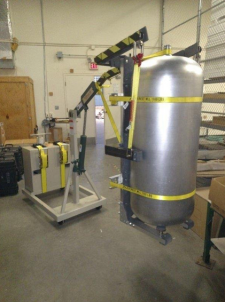 Adding a COPV to a tank substantially increases its weight. To help connect the massive tanks to the testing system, NASA tasked Ganzak with designing a hoist.

"The majority of my experience was taking a visual concept in my head, sketching it out on paper and validating it through 3D modeling," Ganzak says. "I showed it to the board and it actually was fabricated and is currently being used at the facility."

The project gave Ganzak a chance to put what he'd learned in the classroom to work.

"A lot of the calculations I made were through mechanics and materials that I learned at Western. I was excited that I took something from my academic knowledge and used it in a real-world situation and it worked," says Ganzak. "Its' a very satisfying feeling to have." 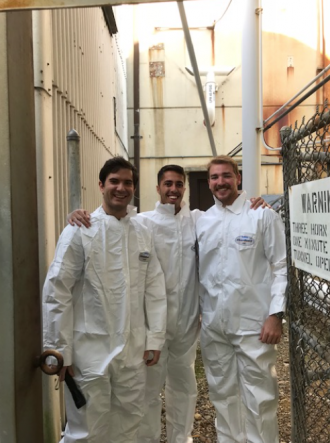 Ganzak and colleagues prepare to enter a hypersonic sphere at Langley Research Center.

Ganzak's supervisors were so impressed with his work that they recommended him for another NASA internship, this time at the Langley Research Center in Hampton, Virginia.

He secured a position on the Flow Physics and Control Branch—the same team his mentor, aerospace engineering professor Dr. Tianshu Liu, was a part of before he came to WMU.

"When a plane approaches the runway, all of the weight wants to sag the plane down. So you need something to produce more lift force so it doesn't hit the ground so fast."

In order to offset the force, most planes have flaps that deploy to increase surface area and keep the aircraft elevated. The pylons that house those flaps, however, create substantial drag during the rest of the flight. Ganzak worked on a system to eliminate the need for the pylons under the wing.

His work did not go unnoticed.

"In his short time at Langley Research Center, he has become a sought-after asset across organizational boundaries as many had requested his technical support, particularly in computer-aided design," wrote senior research engineer Dr. John Lin in a letter of recommendation. 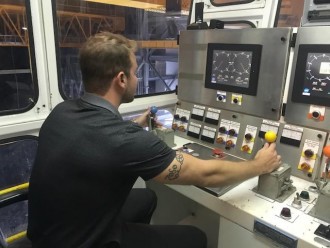 Ganzak at the controls of a crane at Kennedy Space Center.

Ganzak's success at Langley led him to a third opportunity with NASA, this time at Kennedy Space Center in Cape Canaveral, Florida. It put him in the center of the space agency's launch operations.

"Right now NASA is working on the Space Launch System, which is the new generation of rocketry that will take astronauts into what they call deep space," says Ganzak.

As a member of the Launch Accessories Branch, Ganzak worked on the launch tower that will eventually support the rocket planned to blast off into deep space.

Ganzak designed hinge mechanisms so that the massive umbilical arms, which stabilize and provide fuel to the rocket, can swing out of the way at liftoff. The work involved going through old NASA designs and modifying them for modern use.

By the time his third internship wrapped up in May 2018, Ganzak had gained extensive real-world experience in his field and built a reputation as an excellent candidate for future employment at NASA. He'd also fulfilled part of a childhood dream.

"You get to be part of the future, designing and creating things now that shape the scientific machine for generations to come."

BACK TO THE CLASSROOM 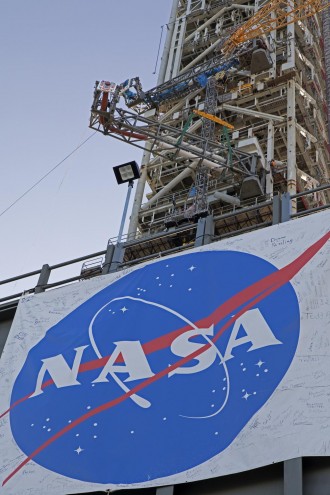 The NASA flag is displayed at a launch pad in Cape Canaveral, Florida. (NASA)

Coming back down to earth after his time at NASA was daunting.

"I thought it would be hard to come back and finish, transitioning from the field back into academics," Ganzak says. "I actually jumped right back in and increased my GPA a little in the process.

Working at NASA also opened up some doors for undergraduate research opportunities back at WMU.

"Ford Motor Company had talked to Dr. Tianshu Liu (about aerodynamics testing), and he personally gave me the project because it utilized a wind tunnel, which I have a lot of experience in working at Langley," says Ganzak. "It's amazing to be able to do research like that as an undergrad."

Ganzak says opportunities like that--and faculty like Liu--are what drew him to WMU in the first place.

"A lot of the professors at WMU have come from different industries such as NASA or top agencies in other countries," Ganzak says. "We bring international knowledge to the table. The faculty is the strongest card in the deck of what Western's engineering campus has."

Now that he's graduated, Ganzak is considering graduate programs to continue on his current trajectory that could land him his dream job. But even as he shoots for the moon, he remains grounded

"The sheer atmosphere of working towards the new frontier of space exploration will always excite me."