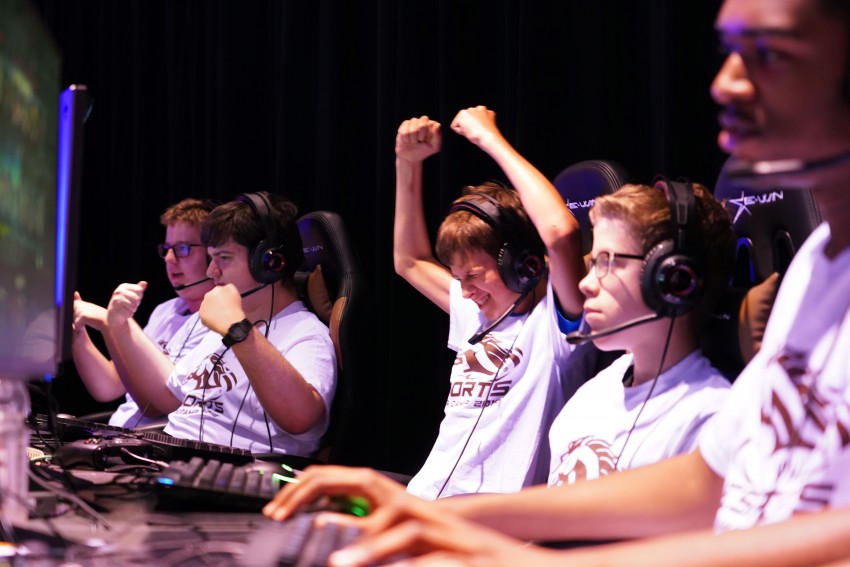 A camper cheers as his team competes on stage in WMU's state-of-the-art esports arena.

KALAMAZOO, Mich.—They spend their days in a virtual world, but the competitive nature of esports gamers is very real. For one week, Western Michigan University is giving kids a glimpse at what a future in professional gaming could look like. 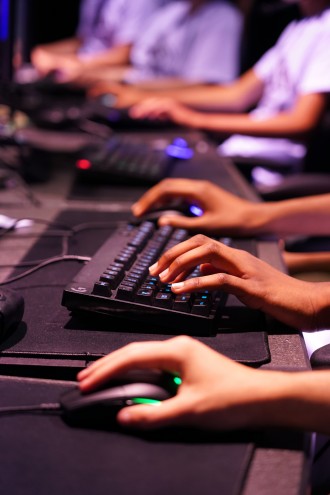 "It's an amazing setup. It reminds me of a bunch of the esports leagues and what actually goes on during them," says 16-year-old Zaire Spencer, a rising junior at Bloomfield Hills High School in suburban Detroit. "There's wonderful technology and it's just a way to get you in a mindset of what it feels like to be a professional gamer."

When most people think of summer camp, athletic drills and the wilderness come to mind—not game controllers and computer screens. But Scott Puckett, senior director of information technology for WMU's Office of Business and Finance as well as co-creator of the University's esports program, says this camp is about much more than clashing with competitors and scoring points.

"Every day they'll teach a new topic. They'll teach mindset, communication, leadership and how you use that in the game, and then they practice in the game," Puckett says, adding that many of the high school-age campers are eager to learn and improve their craft so they can go back to their school and start their own team.

"We give them exercises and then we talk about concepts," says Tavian Napier, coordinator of WMU's esports program. "That process over the four days allows them to understand it, talk about it, practice it and then reflect on it."

TRAINING FOR THE FUTURE 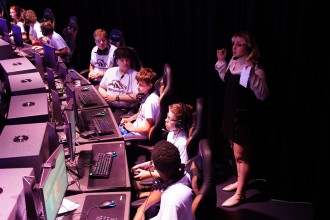 Vicky Brzostowski, standing, coaches campers as they prepare to face off in a competition.

WMU offered four weeklong esports day camps for middle school and high school students in summer 2019. The camps offer participants opportunities to train on such popular games as Rocket League and Overwatch and review video of other players and learn about other aspects of the gaming industry.

"I had never even heard of esports camp, so I typed it in on Google and all of a sudden Western Michigan University came up. I didn't even know WMU had an esports camp," says Reco Spencer, who drove his son in from Detroit to attend.

While some parents may scoff at a camp where kids sit back and play video games all day, Spencer sees a real value in the experience.

"You hear people saying it's a waste of time, but hand-eye coordination, spatial and mechanical reasoning, you learn all that kind of stuff," he says. "We live in a different time where you can do so much with this knowledge."

Esports also open up competitive opportunities for a diverse group of kids.

"I don't ever see my kid going on a football field or baseball diamond, but put him on a video game and he's very competitive and learns to work on teams, and he wouldn't get that otherwise," says Dr. Alan Rea, WMU professor of business information systems and father to an avid gamer. 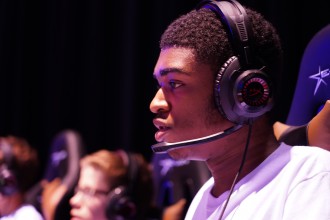 Zaire Spencer traveled from Detroit to participate in the esports camp.

Napier says while video games began as children's toys, the sport has evolved and deserves to be taken seriously.

"If you look at someone who plays chess competitively, it's very respectable. That's because people know how much skill and strategy it takes to be a grand champion," says Napier. "Gaming has gotten so complex; now it's like high-speed chess. It takes a lot of mechanical skills, so it's very physical. It's not just anybody who can do it and pick it up and go."

As with athletes in traditional sports, esports competitors also have to keep their physical health in mind.

"Every day we do warmups, stretches for arms, shoulders, wrists. Some people's esports careers end in their early 20s because of carpal tunnel," says Vicky Brzostowski, a camp counselor and member of the  WMU Esports club team. "We want to teach the kids to prevent that."

OPPORTUNITY AT THEIR FINGERTIPS 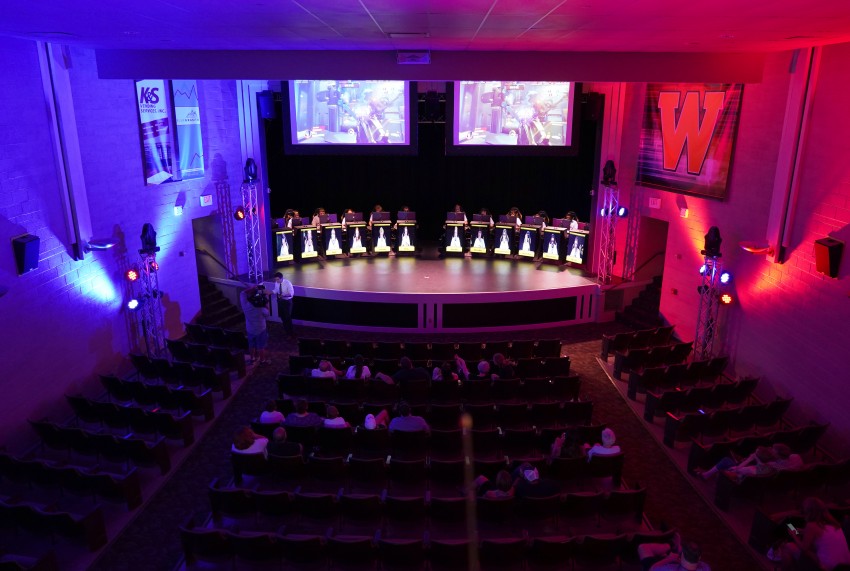 Esports is projected to be a $1.5 billion industry by 2020, with more viewers than every sports league but the National Football League. Most aspiring gamers won't achieve professional status, but there are more than enough jobs in the industry to go around, and camps like this WMU's aim to show young gamers what's available.

The coordinator of the esports program "brings students up to the control room and he teaches them how to do this," says Puckett. "The top three jobs in esports are marketing, management and software development."

"Look at a football game," says Napier. "There are more than just the players, coaches and referees. There's a whole group of people that promote it, that put it on, and that make sure it's as good as can be." 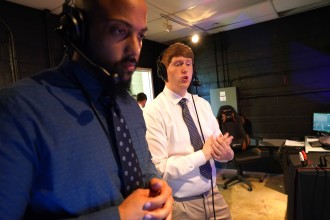 Tavian Napier, left, and Trevor Cwiek "shoutcast" during the competition, similar to commentating during a sporting event.

There's also a push within the University to enhance academic offerings related to esports.

"We've had two marketing classes at the esports arena. I've been on stage giving presentations to classes," says Puckett who, along with Michael Sisk, assistant director of business and finance information technology and co-creator of WMU's esports program, has met with nearly every dean at WMU to talk about esports opportunities.

"We've been pushing the idea that you can incorporate this into your curriculum."

The esports program has already begun collaborating with the College of Fine Arts, giving students the opportunity to learn how to operate the esports arena while also benefiting from their technical expertise to enhance events.

WMU's commitment to the future of the esports industry has people taking note.

"I'm going to take camp brochures back to Detroit," says Spencer. "Next year, I'd like to sponsor or be able to get a sponsor to bring kids up for a camp."