Decline in pollinators prompts WMU staffers to build them a home

Moss, a groundskeeper, and Mullins, a gardener, have become self-taught experts on how pollinator species, primarily Michigan's native bees, reproduce. Their foray into the life cycles and importance of these dwindling creatures prompted the duo to create a home for them at WMU, with valuable construction assistance from student employees Zachary Smith and Cameron Youngs. 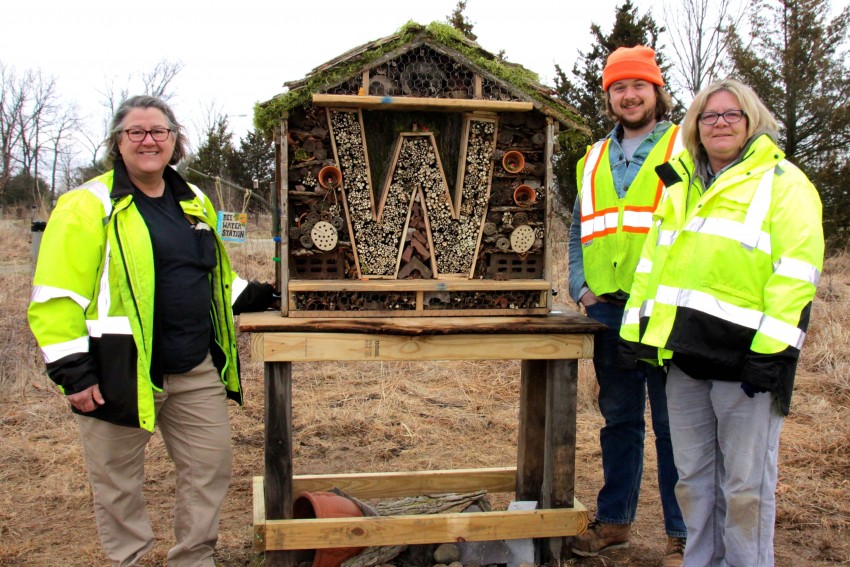 Mostly made out of recycled material, the pollinator house was built by, from left, Moss, Youngs, Mullins and (not pictured) Smith.

The pollinator house was installed in April at the Parkview Campus, an area Moss and Mullins call their office backyard because that's where the two Landscape Services staff members spend most of their work days.

It beckons bees and other pollinators to settle in and use the house as a maternity ward. If that happens, more of these ecologically essential animals will be around to help with propagating the native plants that are a key feature of the Parkview Campus.

Moss and Mullins briefed members of the campus community on their house project during a spring presentation that drew many of their Landscape Services peers as well as Kari Montgomery, WMU's first lady.

During the talk, they noted that the 265-acre Parkview Campus is much more than the site for WMU's main engineering facility and Business Technology and Research Park. It's part of southwest Michigan's original Genesee prairie, so the University has left broad swaths undeveloped. In addition, native plants that bloom at varying times have been reintroduced on the campus' more than 113 acres of natural areas. 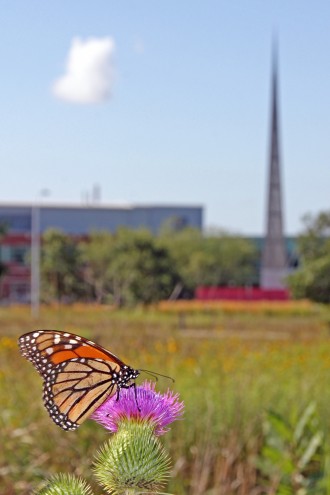 A monarch butterfly lunches on a thistle flower, unconcerned that the Engineering and Applied Sciences Building looms in the background.

"The idea of the bee house fit for us perfectly because we do have all of these native plants out there. We've got...things that these native pollinators are already working on," Moss said during the spring briefing.

"It's a big place. Most people don't have the luxury of that. They have a smaller space or they're in an urban setting. In Europe, a lot of the cities have bee houses right in the downtown. They mount them on buildings and under stairways because they know the importance of keeping these pollinator populations strong and healthy."

Although bee houses can be placed just about anywhere, it's necessary to have water nearby. To supplement the four stormwater retention ponds at the Parkview Campus, bottle caps nailed to WMU's bee house serve as water containers.

"When you get home from a hard day of foraging, you don't want to trudge down to the pond. You want to have a cold drink on your patio," Moss said. "These are small bees. There are some bees that are super tiny, like ant size almost. And they can only fly a few hundred feet."

The unique resources and landscapes at Parkview allow Moss and Mullins to tend to the traditional landscape around buildings while also experimenting with ways to support the location's prairie ecosystem. They say testing out a home for pollinators is particularly important.

"About three-quarters of flowering plants rely to some degree on pollinators. One in three mouthfuls of food require the presence of a pollinator," Mullins said.

"Our wildlife depends on an even greater proportion of pollinated plants for survival. And pollinators are also food for birds, lizards and spiders, making them a keystone species for environmental health."

But large numbers of pollinators have been disappearing for decades. In the case of honeybees, which contribute an estimated $15 billion to the U.S. economy, the American Beekeeping Federation reports that the nation is now losing these bees at unsustainable rates.

In Michigan, both honeybees and bumblebees are in significant decline. Problems from pesticide use, climate change, diseases, habitat loss and fragmentation, and a combination of other factors are taking their toll on these and numerous other pollinators.

The pollinator house project was hatched after Mullins' sister-in-law in England sent her a photo of a bee house. Mullins began learning about the structures and talking to Moss about making one for the Parkview Campus. 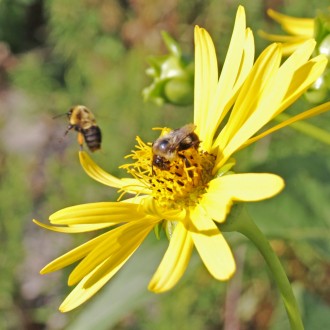 The duo initially planned to build a house just for native mason bees. The project morphed into a pollinator house when they realized it wouldn't be a stretch to construct a "multifamily" dwelling that could attract a variety of beneficial insects.

"What started out as a little tiny spark really inspired us to research and learn. We hope the house gets people to stop and think about our pollinators. What we're trying to do is educate about what our ecosystem is and what our roles are," Moss said.

"This is an experiment for us, as well. We didn't know squat about bees before we started this. We're going to be monitoring this thing from here on out. And we'll be checking it regularly to record what comes in and what goes out."

Steve Root, who supervises Moss and Mullins, views their construction handiwork as another way the University fulfills its educational mission.

"We've been working to make the landscape an extension of the classroom. So, places like the pollinator house become a living-learning laboratory—an educational place to bring people to learn from," Root said during the structure's installation on a chilly April morning.

"This laboratory concept has been well-received so far. Currently, we're working with the biology department and some environmental science classes, and just recently we were talking to a couple art students about some opportunities there, too." 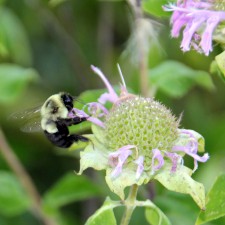 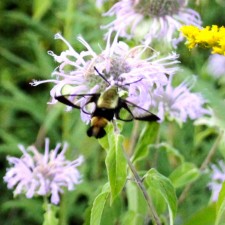 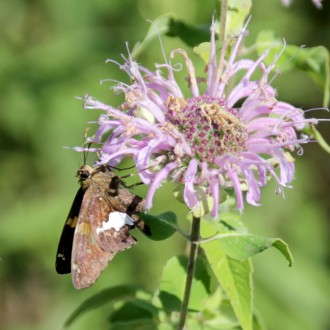 A wide variety of animals pollinate, including ants, flies, beetles, moths, butterflies, wasps, birds, and even mammals ranging from bats and small rodents to the black lemur. Bees perform the majority of pollination, though.

Moss said that's because bees are highly efficient at it. They practice flower constancy—going to the same flower species in each foraging trip—so they don't spread pollen to flowers that can't use it.

Scientists estimate there are some 20,000 bee species worldwide, with about 4,000 kinds native to the United States and more than 450 native to Michigan. Of particular interest to Moss and Mullins are Michigan's native solitary bees, which are more efficient pollinators than the honeybees that European settlers brought to America.

"The mason bee literally just dive bombs into the flower, gets all up into the reproductive system of that flower and makes a mess," Moss said as an example.

"That's good when you're pollinating because you go to the next flower and you're sure to spread pollen around. And because collecting pollen is their life work, 250 mason bees can do the work of 20,000 honeybees."

Solitary bees like leafcutter and mason bees are docile, unless aggressively provoked, and have a mild venom so there's usually no reason to worry about getting stung. They nest in holes and use leaves or clay to partition and seal the nests. This building technique is how mason and leafcutter bees got their common names.

Although they may nest in groups, each solitary bee tends to its own brood during its short four- to six-week life span. Male larvae are packed into the nest last, allowing them to be first in line in case a hungry predator breaks in and first out so those that survive can be ready to mate right away.

"It's kind of sad," Moss admitted. "The males die right after mating. The females gather food, lay their eggs and then they're gone. Their life is very short."

In contrast, bumblebees and honeybees are social insects that live in colonies and have a queen. Life spans of colony members depend on the roles they play and can range from a few weeks to several months, or even years in the case of a honeybee queen.

Bumblebees are the only bees native to the United States that are social. Pollen easily sticks to their hairy bodies, and they're good at vibrating flowers to shake out the pollen. Those attributes have led some farmers to start using them along with certain solitary bees to pollinate their crops, instead of depending solely on the decreasing supply of honeybees.

The Parkview Campus is located at the corner of Drake Road and Parkview Avenue in Kalamazoo. The pollinator house has been installed off of Campus Drive, kitty corner from the WMU Soccer Complex driveway on the north and a retention pond on the south. A sign near the sidewalk that runs past the installation site lets passersby know its precise position. Map to house.

Don't wing it, get more facts about pollinators by reviewing both parts of the Moss and Mullins presentation as well as the following webpages: