While Western Michigan University has always striven to implement sustainable practices and promote environmental stewardship on campus, WMU Landscape Services has recently taken it a step further. In addition to the 132 acres of natural wooded areas on WMU's campus, the University owns two nature preserves totaling 322 acres and maintains natural stormwater detention and retention basins. In recent years, the University has made the conscious decision to not only maintain safety in these areas but to begin managing for ecological health and education opportunities. The Natural Areas Program is unique in that very few universities currently dedicate resources to programs that actively manage natural areas for research, education, passive recreation and ecological health .

Asylum Lake Preserve is a 274-acre nature preserve that is owned and managed by Western Michigan University. The lake and adjoining property lie in the West Fork of the Portage Creek Watershed. This property serves as a research area for professors and students of anthropology, biology, geography, hydrogeology and environmental studies at WMU as well as other educational institutions.

In September 2008, management plans were developed for each of the nine habitat types in the preserve. A natural features inventory of the property was completed recently outlining vegetation types, avian inventories and management strategies.

The Asylum Lake Preserve is a perfect outdoor education classroom, and events for adults and children are held throughout the year. Tours and topics that feature the history, plants and animals, as well as management activities and research are popular.

Kleinstuck Preserve is a 48-acre nature preserve owned and managed by Western Michigan University. This property is open to the public for passive recreation and is used by WMU and other educational institutions for research and education purposes.

The Stewards of Kleinstuck is a dedicated group of local citizen volunteers that actively assist the WMU Natural Areas Program in protecting and improving the environmental health of the preserve. They meet regularly for workdays and events in the preserve using the Kleinstuck management plan as a guide for ecological restoration.

WMU's Parkview Campus, which houses the Engineering and Applied Sciences Building and the central parkway of the Business Technology and Research Park, is planted with large expanses of a historic southwest Michigan native ecosystem called prairie.

There are approximately 120 acres of woodlots on main campus. These areas are comprised of forest vegetation and are not landscaped. With the help of volunteers, we have begun removing the invasive vegetative understory in these areas in order to improve the health of the habitats and create a safer environment for the University community. We recently completed WMU's first woodlot management plan, which will serve as a guiding tool in future management of University woodlots. The plan provides guidelines for increasing ecological health, safety, and aesthetics. Recently Landscape Services completed a natural areas site assessment for potential construction on campus. The Valley Tree Assessment Report inventoried trees and assessed habitat in the area of Goldsworth Valley residence halls. This is the first in a series of woodlot inventories to be undertaken by Landscape Services to help the campus community understand the value of campus trees. It is hoped that all new construction will include a tree assessment prior to construction. 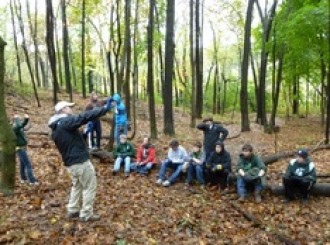 Every week during the school year a dedicated and enthusiastic group of environmentally active students participate in stewardship activities in an area they have adopted within the Kleinstuck Preserve. Teachers Janice Russo and Derek Strine lead these volunteers under the direction of the natural areas and preserves manager in activities like invasive plant removal, planting natives, building wildlife shelters and improving trails. The students were challenged to do a PowerPoint report on native shrubs and were rewarded by WMU Natural Areas with those shrubs to plant in the preserve. These same students visited the WMU campus for a tour of the campus landscape and the Finch Greenhouse.

The student reports can be viewed if you have Microsoft PowerPoint. Groups of students selected plants from a list provided by the WMU Natural Areas Program. The challenge was to find out if the plants were appropriate for the preserve and what conditions they preferred. Upon completion and presentation of the report, these plants were available to the students for planting in the Kleinstuck Preserve.

The Montessori School located on Howard Street participates in educational opportunities at the Kleinstuck Preserve several days during the school year. Students get guided nature walks and help remove invasive plants as well as planting native plants and learning about the cultural and natural history of this neighborhood preserve.

The Natural Areas Program provides free public seminars throughout the year on various ecological issues. In addition to staff public presentations , the natural areas manager is often invited to WMU classrooms and field trips to provide insight into topics of sustainability and ecosystem services Seminars include: 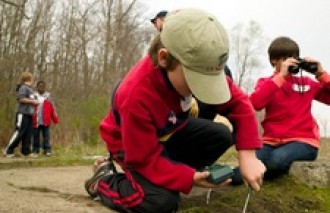 Outside While Learning is a program administered by the Kalamazoo Nature Center, which incorporates hands-on learning through outdoor education. Local elementary schools take field trips to area nature preserves to learn about water ecology, birds, invasive species and more. The WMU Natural Areas Program has hosted these educational events at both Asylum Lake and the Kleinstuck Preserve since the program was started. Students learn teamwork skills and self-reflection through nature and have the opportunity to build relationships with kids from other schools. The program encourages kids to be curious about nature and hopes to inspire environmental stewardship at a young age. Over 200 students each year are introduced to WMU and the stewardship of their public Natural areas and preserves.

Fourth-grade students from Parkwood-Upjohn Elementary School in Kalamazoo visited the Kleinstuck Preserve for a day of environmental education and journalism. After a hike and discussion of the natural and cultural history of Kleinstuck, students relaxed in the woods to write about their experience and participate in activities that focus on trees. 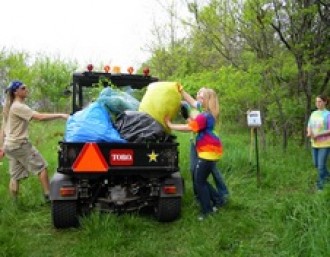 WMU's Natural Areas program and the Stewards of Kleinstuck have been working together to provide a fun and productive outdoor experience for the sixth through eighth graders at St. Augustine Cathedral School. Tom Maihofer has been bringing his classes to Kleinstuck Preserve for many years to teach them about the importance of our natural world and what it means to work hard. Students from his class have adopted a section of the Kleinstuck Preserve, which they continue to care for, and twice a year the Natural Areas Program and the stewards organize an event in which students pull invasive vegetation, work on erosion control and learn about the ecology of Kleinstuck Preserve. The goal is for these students to gain an appreciation for the outdoors through getting dirty, working hard and reflecting on oneself in nature..

Asylum Lake Policy & Management Council, a 14-member council made up of representatives from local neighborhood organizations, environmental groups and WMU departments for Asylum Lake Preserve. It is a 274-acre parcel of land that is owned by Western Michigan University and endowed with funding through the Kalamazoo Foundation. The lake and adjoining property lie in the West Fork of the Portage Creek Watershed. The land is preserved as a passive-use recreation area under an agreement between the City of Kalamazoo and WMU. Asylum Lake's preservation was ensured as a condition of the development of the College of Engineering on Parkview Avenue. The property serves as a research area for professors and students of anthropology, biology, geography, hydrogeology, and environmental studies at WMU as well as other educational institutions. The land is open to the public at no cost.

Meetings are held a minimum of 4 times per year on the second Thursday of the month at 7:00 p.m., locations Vary .