KALAMAZOO, Mich.—Leaning back in their chairs, six teenagers sit in a circle listening to a story. A volunteer teacher gestures to the book, pointing at the pictures and teaching them words like “octopus.” Each student shows different levels of enthusiasm, but all of them share a need to better understand English as refugees starting a new life in the United States.

This year, the Kalamazoo Refugee Resource Collaborative—KRRC—debuted a pilot program for middle- and high school-aged refugees to help them gain the tools they need to be successful in the American school system.

Marion, the collaborative’s director, saw the need for the program when the Syrian Refugee Crisis brought more refugees into Kalamazoo, which she says didn’t have a system in place to accommodate the needs of the population.

“My parents were immigrants,” says Marion, who earned a master’s degree from WMU in industrial engineering. “They wanted to come here but it was still hard. I couldn’t even imagine if they were forced to come here without any preparation for language and schooling.”

On average, Marion says, refugee children have been out of school for four years. Many kids aged 8 or 9 have never been in a school setting.

“We even get students that are 9 years old and they don’t even have a pencil grip. They don’t know how to hold a pen. They have never held a pen” says Marion.

Students from Syria, Democratic Republic of Congo and Rwanda attend the pilot program, which is designed for students that are at risk of not completing school.

“Some of them do not have the skill level of the grade they have placed in, so then they start acting out because they don’t understand,” says Goldman, who has been volunteering with KRRC since January. 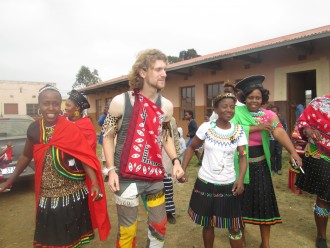 Goldman stands with some people in the South African village where he worked.

Today, Goldman is an educator and board member at KRRC, but in 2014 he was a recent college graduate about to embark on a journey to South Africa with the Peace Corps. Goldman had traveled to Cape Town through WMU Study Abroad prior to returning with the Peace Corps for the School and Community Resource Project.

“I initially saw the Peace Corps as an opportunity to simultaneously help people while getting to travel, learn a new language, and broaden my perspectives,” Goldman says.

Goldman worked in a village located in the Kwa-Zulu Natal province where Zulu was the native language. Two years of supporting education in South African communities convinced him to return to WMU for his master’s degree in psychology.

He worked with schools and organizations during his graduate studies to manage educational resources for children with disabilities.

After completing his master’s degree, Goldman continued his work in education through helping disadvantaged populations at KRRC.

“I think I'm likely to work with disadvantaged populations of people because my life has been so stable,” says Goldman. “I've just always been aware of how good I have it, and literally the least I could do is try to use my resources and skill set to make other people's existence more pleasant while getting to learn from them.”

Goldman hopes to one day use his experiences and passions to work for Doctors Without Borders.

The pilot program consists of a three-hour program each day for two weeks. Students are divided into different groups based on their English language abilities. Each class utilizes activities and games to develop those language skills.

KRRC has been aided by countless volunteers to keep the program running but still requires a number of resources to fully meet the needs of its students. The organization is currently looking for translators to aid in communication with parents as well as psychologists and social workers to help children dealing with war trauma.

“These parents want what is best for their children but they have no idea how to do it here,” Marion says. “It’s like when you are watching someone that is drowning; you just have to help them.”