KALAMAZOO, Mich.—Western Michigan University is exploring ways to advance its commitment to reducing its carbon footprint, as scientists around the world sound the alarm about a growing climate crisis.

"Recent reports reveal the science is happening faster than we think. We are already seeing effects of climate change," says Dr. Denise Keele, associate professor of political science as well as environment and sustainability, noting the steps the University has already taken in preparing a climate plan.

"In our judgment as faculty who read, teach, research and do the outreach on this, everything is telling us we need to reevaluate what we're doing and what that goal is."

The University is kicking off its efforts by launching a new Carbon Neutrality Committee, charged with researching and developing a long-range plan to reduce carbon emissions on campus.

"Western Michigan University has long been a leader in its commitment to sustainability. This goes back to 50 years ago, when WMU became the first university in our state to establish an environmental studies program," says WMU President Edward Montgomery.

"Every day we work across the spectrum of research, teaching and facilities management to advance the idea that sustainability is an individual and collective responsibility. By marshaling our expertise and commitment via a Carbon Neutrality Committee, we can strengthen our contributions to reducing emissions and promoting sustainability."

The Kalamazoo Climate Crisis Coalition organized a march at WMU as part of the Global Climate Strike on Friday, Sept. 20.

WMU made a commitment in 2012 to carbon neutrality by 2065. The committee will evaluate whether it is feasible to speed up that goal to the year 2050, with a commitment to cut the University's carbon footprint in half by the year 2030. Taking such an aggressive approach, however, does not come without costs. That's why the committee will include stakeholders from across campus, including facilities management and accounting professionals, who can weigh the personal and institutional costs of potential solutions.

WMU is also working with the Kalamazoo Climate Crisis Coalition—KCCC—to coordinate sustainability efforts among a number of local stakeholders, including nonprofits, community groups and municipalities.

"We are being very intentional looking inside Western, knowing we can't achieve anything for the climate without Kalamazoo and all of our partners being part of it," says Dr. Jennifer Bott, provost and vice president for academic affairs at WMU. "This committee is complementing the community-based work that's happening with KCCC." 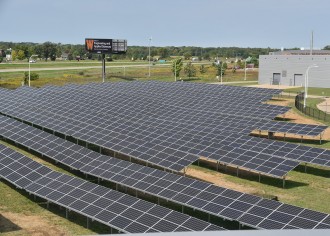 WMU has a history of sustainability-focused initiatives, from implementing one of the most extensive electric vehicle infrastructures on a college campus in the nation to opening an 8-acre solar field. The University also made the switch from coal to natural gas decades ago at its power plant.

"Higher education has an incredible opportunity. We can equip future leaders with the tools they need to power future civilizations in ways that don't destroy our living planet," says Jeff Spoelstra, director of WMU's Office for Sustainability, who will also co-chair the new committee with Keele. "We can equip them to design and organize systems that eliminate waste, rebuild healthy soils, and regenerate lost biodiversity.

"By thinking long-term, considering the long-term costs and benefits of our plans and operations, and strengthening our Climate Action Plan, WMU will again step forward into a leadership position and future Broncos will take what they learn and change the world for the better"

Members of the new carbon neutrality committee are currently being finalized. Once the group is in place, it will evaluate the University's current emissions and energy costs to establish a baseline. Then, the group will identify areas where short-term and long-term changes can be made and determine the feasibility of those measures.