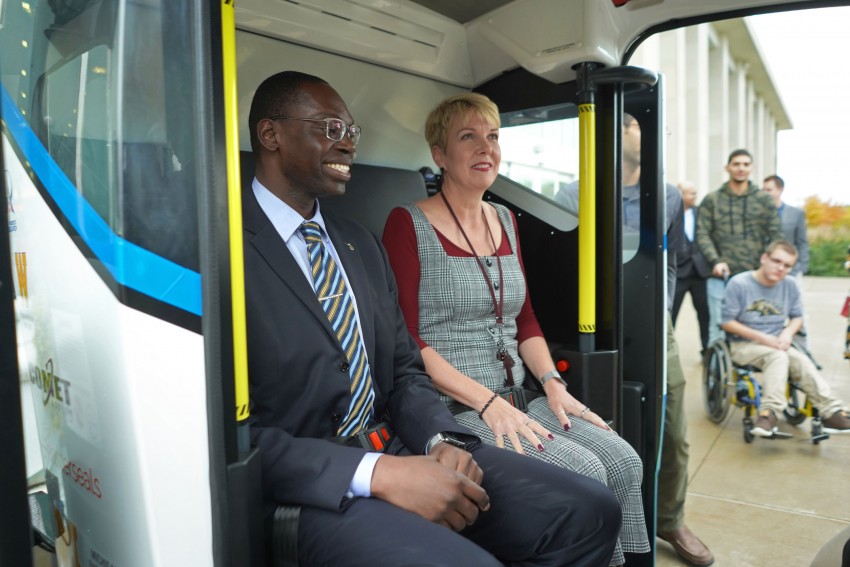 Lt. Gov. Garlin Gilchrist, left, sits alongside Jean Ruestman, administrator of MDOT's Office of Passenger Transportation, inside one of the autonomous shuttles.

KALAMAZOO, Mich.—Automation and sustainability are driving the future of the auto industry, and two Western Michigan University graduate students are leading the charge.

"Right now, Michigan is in a race with companies in Silicon Valley, and in countries around the world, to revolutionize the future of mobility through autonomous technology," says Gilchrist. "The research that WMU and Pratt and Miller are doing will give us a competitive advantage and help solidify our position as the car capital of the world for generations to come."

"We're working on the modeling simulation of the autonomous vehicles," says Rojas. "We helped with the mapping, the cost value analysis and with everything needed to make the pilot possible here at Western."

Goberville and Rojas are conducting the research under the guidance of Dr. Zach Asher, assistant professor of mechanical and aerospace engineering and director of WMU's Modeling, Control and Optimization Laboratory.

"This research is important because individuals with disabilities encounter many challenges when it comes to transportation," says Asher. "Autonomous vehicles, which require no human-machine interaction, have the potential to enable new independence for them." 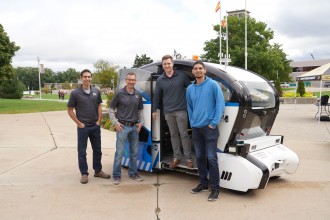 Engineers from Pratt & Miller stand outside the shuttle alongside Goberville, second from right, and Rojas, right.

Graduate school is challenging in itself. Adding in a state-funded project involving multiple partners across Michigan keeps both students busy.

"You just have to focus on one thing at a time and try not to get overwhelmed with everything going on," Rojas says.

Of course, focusing on work isn't hard when it's what you love to do.

"It's my passion now, being able to do this kind of stuff," Goberville says. "This has changed the course of what I thought my career would be. It's really exciting to be in a new field and you're able to have an impact on the future of it.".

In fact, this is just one of several ongoing projects underway in Asher's lab, which puts students on the cutting edge of autonomous technology research and development.

"It is so important for companies and universities to create a space for young adults to be involved at all levels in the process,” says Gilchrist. “These experiences can not only help to shape and define a student’s career, but it can also shape and define the research by involving a younger generation that was born with technology at their fingertips." 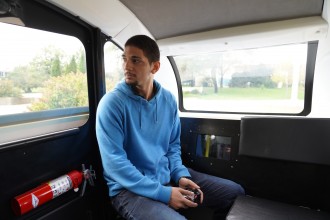 Rojas rides in the shuttle.

Rojas always had a fascination with the automotive industry, but he didn't discover his interest in automation until coming to WMU. A native of the Dominican Republic, he studied mechanical engineering and worked at a power plant for four years before deciding to pursue a master's degree in the United States.

"Western has a lot of research in the automotive field," says Rojas, whose research related to this project is now being published in the Transportation Research Board's national journal. "When I got here, I saw this opportunity to work with autonomous vehicles. It's great for my future."

Goberville arrived at WMU as an undergrad from suburban Chicago. While he knew his strengths were in science and math, he didn't solidify his path in engineering until he took a physics course involving electronics.

"Being able to do stuff like that is what really got me interested in what I was doing," says Goberville who found his passion in robotics before getting involved with Dr. Asher's lab. "I wouldn't be able to have the experience I am now if I went to a bigger school. There's no way I'd be involved this closely with this project or even other research we're doing in our lab, trying to integrate an autonomous system into a Kia." 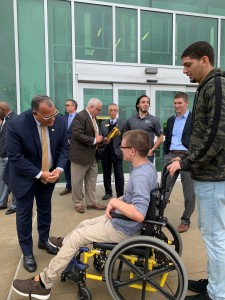 The team has been drawing on the expertise of WMU students with disabilities for their accessibility research. Travis Waker advised them on better accommodating different types of wheelchairs in the shuttles.

"I think people with disabilities need as much access to things as anyone, and this would be a huge step," says Waker, a Howell native in WMU's counseling psychology graduate program. "I think self-driving/autonomous vehicles are just the beginning of an easier future for people with disabilities and people in general. I really admire the work the engineers are doing at Western, and I'm really glad I can contribute."

Student Taylor Arndt, a sophomore planning to major in computer science, also got involved in the project. Overcoming her own vision challenges to excel on campus, she worked with the team to develop a system so that students with visual impairments could be fully independent in finding shuttle stops.

"This is one of the things that she helped us find that we didn't have planned in the project plan," says Chris Andrews, director of mobility and innovation at Pratt & Miller. "But, as we met her and as we started working with the community here, it's amazing how you've got this synergy that can happen for solutions." 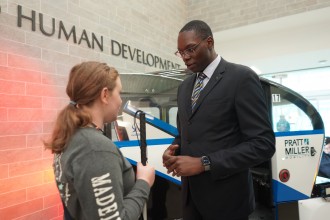 Arndt, left, speaks with Gilchrist about her work on the project.

"I think it's really awesome that I could help change the project. I wanted to make it fully accessible for everybody, including those with blindness," says Arndt, who works as an accessibility specialist at WMU's computing center. "Organizations that I've been a part of have taught me the value of what autonomous vehicles can do and how I can help with the technology."

Waker says research like this could be a game-changer for people who require accommodation for disabilities.

"Technology like autonomous vehicles will help tremendously with even the smallest things like getting to a future job or being with friends. In the past I've had to rely on others and public transportation," Waker says. "With self-driving cars, none of those obstacles are in place anymore and the places I can go are unlimited."

The accessible autonomous shuttle pilot will run for two weeks, operating Monday through Thursday from 8:30 a.m. to 3:30 p.m. Students who have pre-registered through WMU's Disability Services for Students organization will have access to the shuttles, which run on a roughly half-mile path on main campus between Sangren Hall and Sprau Tower.