KALAMAZOO—A team of two Western Michigan University sales students competed in the State Farm Marketing and Sales Competition at the University of Central Missouri, during the fall semester, with one student taking top honors in the customer service role-play category. This victory brings WMU’s student winnings to over $40,000 in the past eight years of competition, making it the most successful university in the event’s history.

Ryan Demas and Sarah Obermeyer competed in three different rounds of competition, including: 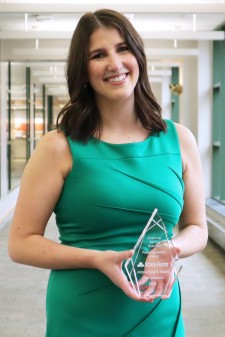 Obermeyer clinched the win in the customer service role-play portion of the competition. She focused on building rapport with the client while processing their auto insurance payment. Obermeyer credits her success with asking key questions that uncovered the true risk the client was facing without renters insurance.

“I found success in the role-plays because I practiced with many different people who had varied approaches in playing the client in my practice sessions, which helped me keep my role-play conversational, even if the client did something unexpected” says Obermeyer. "Placing first was an honor and incredibly rewarding. I was able to be a member of an amazing team and I was also the first competitor from WMU to place in the customer service role-play.”

Dr. Kelley O'Reilly, associate professor of marketing, coached Demas and Obermeyer for the competition, providing feedback and support as they refined their ideas and techniques.

"In the years we have competed, WMU has hit the podium as a winner in every year but one," says O’Reilly. "This feat has earned the student competitors $40,000 in scholarship money and made WMU the most successful university to compete in the event’s history.” O’Reilly credits consistent, steady and focused preparation for six to eight hours per week in the months leading up to the event as an important part of their success.