Wilder presented her climate change research at the United Nations Conference of Parties.

The Western Michigan University alumna recently returned from the United Nations Conference of Parties—COP 25— in Madrid, Spain, where she presented research she conducted for the UN Framework Convention on Climate Change.

"COP was absolutely a moment when I couldn't believe this is where my life has taken me," says Wilder, who was accepted into the public policy and natural resources master's programs at the University of Michigan after graduating with degrees in Spanish and political science from WMU. "Working with the top minds in this field felt like a dream scenario." 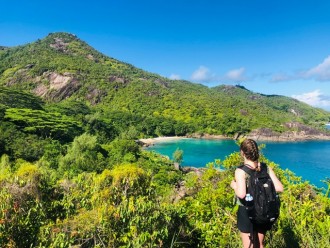 Wilder has been working with the government of Seychelles on ways to adapt to potential impacts of climate change—like rising sea levels and storm surge—on the African island nation and its infrastructure.

"They're a low-lying country. We discovered that 90% of their critical infrastructure is vulnerable to one or two meters of sea level rise because it's all on a coastal plain. So, essentially, everybody who lives on the entire island is extremely vulnerable."

Some of the maps and assessments that Wilder's team completed are already impacting policy decisions the country's leaders are making.

"It's almost unbelievable that I am in a position where I'm able to make a difference like this," says Wilder. "My sister just started at Western (in the fall.) Thinking back to where I was at her age, just starting out, I had no idea that six years later this is what I'd be doing."

Wilder's career path looked a lot different when she first came to the WMU campus in 2013. Her interest in government drew her to the Western Student Association, where she made a connection that changed her life.

Every WSA senator is placed on a committee; Wilder's assignment was sustainability.

"I wouldn't be where I am today without the sustainability committee. It was the first time I'd ever done any environmental work and it allowed me to try something outside of my degrees in Spanish and political science," she says. 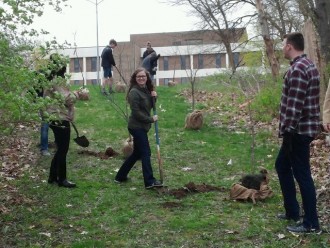 Wilder and volunteers planted more than 100 trees and shrubs on the WMU campus.

Wilder's budding interest inspired her to write a student sustainability grant, which turned into a community engagement PEAK project through the WMU Signature program. She and other volunteers planted more than 100 trees and shrubs on campus. Her honors thesis then focused on the mitigation of greenhouse gases and carbon by planting those trees.

"What I did for WMU Signature actually changed everything I'm doing now," Wilder says. "I found my passion through this opportunity and I'm very grateful to WMU and the Signature program."

Many WMU students find their passion, like Wilder, by immersing themselves in organizations and projects outside of the classroom. According to a survey of recent graduates, 93% completed at least one experiential education activity—nearly half in organizations like an RSO on campus.

There are more exciting projects on the horizon for Wilder, who expects to complete graduate school next year. This spring she'll head to Bogota, Colombia, to conduct clean energy access assessments related to the UN Sustainable Development Goals. After graduation, she hopes to pursue a career in climate policy with an emphasis on sustainable development.