Stage set for music theatre students to break into the industry 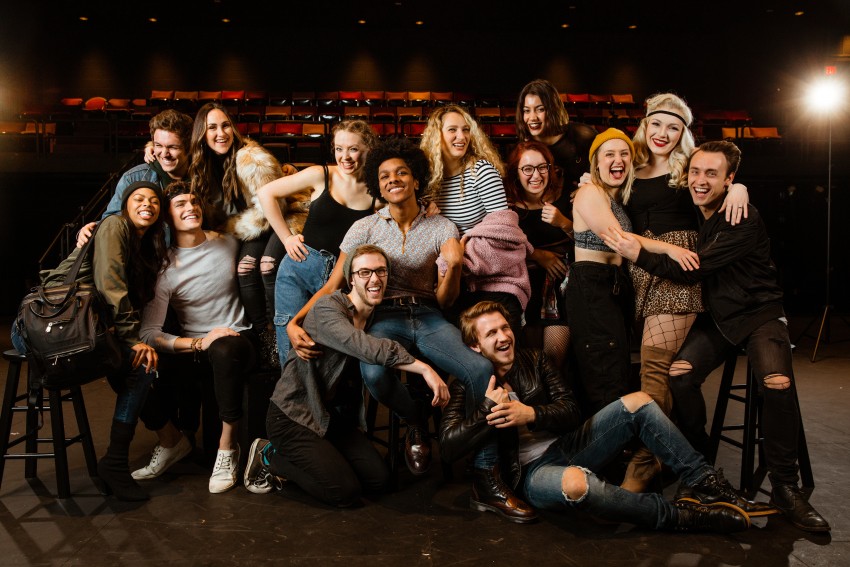 WMU music theatre performance seniors are ready to show off what they've learned in a big audition in New York.

KALAMAZOO, Mich.—When the lights dim and the curtain rises on a New York stage Monday, March 2, a group of Western Michigan University students will be singing for more than a grade. This performance is for their future. The annual Music Theatre Showcase gives graduating students an audience with some of the top professionals in the industry—performing both as a group and solo. 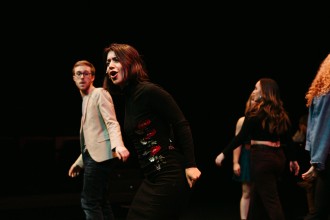 Emma Wineman sings during a performance.

"They have been developing their talent and professionalism for four years, and now they can audition in NYC and have a very real boost to their careers," says Jay Berkow, director of music theatre performance at WMU. "In addition to the Showcase event, the students participate in a series of master classes with casting directors that offer invaluable insight into work in theatre, TV and film."

"Everyone gets at least an interview; everybody gets some form of exposure," adds Emma Wineman, a senior from San Diego, California. "We have alum who've booked straight out of the showcase every year, which is huge."

That was the case for Tiffany Francés, a 2018 WMU graduate who received multiple offers from agents after her showcase and signed with one who'd been following her career at Western for years. She's currently performing on Broadway in "Ain't Too Proud—the Life and Times of the Temptations." And she's no exception. Broncos are making names for themselves both on and Off-Broadway, from Mikey Winslow in "Hamilton" and Brian Martin in "Mrs. Doubtfire" to Crystal Lucas-Perry, who won a 2019 Lucille Lortel Award for Outstanding Featured Actress in "Ain't No Mo'." 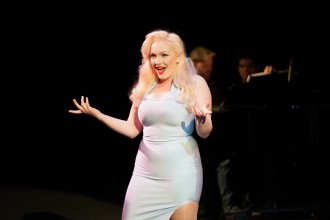 The success is more than just a fluke. Theatre students say it boils down to their experience at WMU.

"The amount of opportunities we get is absolutely phenomenal," says Madison Merlanti, a senior from Novi, pointing out a regular calendar of auditions, workshops and master classes available to all students in the theatre program."

"We can perform starting as freshman," something that's not always an option in programs at other schools, adds Wineman. "I was in 'The Wiz' my freshman year and I played Aunt Em and sang a song to Tiffany (Francés) who was playing Dorothy, and now three years later she's on Broadway. It's just wild. It's so exciting to see that."

A Place to Become

Growing up in community and youth theatre, performing is second nature now for Wineman. As a high school senior, her experience earned her the attention of programs across the country.

"I auditioned for 19 schools. I ended up having multiple options. I came to WMU, and I vividly remember coming on campus and knowing this is where I wanted to go," she says. "It's just a very nurturing environment. You feel encouraged as an artist to develop in your own unique way." 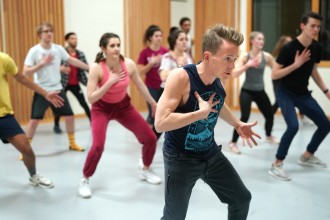 Mikey Winslow, who is currently in "Hamilton" on Broadway, teaches a master class in dance.

Merlanti, who earned a bachelor's degree in theatre design from the University of Michigan before deciding to pursue her passion of performance at WMU, says the caliber of performers in the University's theatre program solidified her path at Western.

"Jay (Berkow) does a great job of putting together a team of alumni and professionals" to work with students, she says. "Most recently we got to work with Cady Huffman during 'Next Stop Broadway,' who is a Tony Award winner."

Students have multiple opportunities throughout their WMU careers to work with top industry professionals, whether through workshops and master classes or chances to perform alongside them. Huffman, for instance, provided coaching on the senior showcase while she was in town for the "Next Stop Broadway" performance.

"It is very important that our students can have these opportunities here in Kalamazoo," Berkow says. "Many programs—even in large, urban centers—do not offer these kinds of experiences that can immediately impact their education and future." 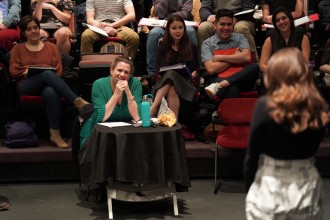 Broadway legend Cady Huffman works with students during a class.

"Our program really fosters these more personal relationships with professionals, which is so valuable," says Wineman.

The program, she says, also gives students space to grow in their craft. In fact, both she and Merlanti have developed an interest in directing—something neither had thought much about until they took a class on the subject.

"If you come in as an actor and recognize halfway through that maybe it's not what you want to do, Western does such a great job of supporting that and encouraging you and helping you grow into what you want to be," says Wineman, who is also adding experience to her resume as Berkow's personal assistant and the music theatre audition coordinator.

"Western has just been the most amazing experience, and I feel so prepared for the future."