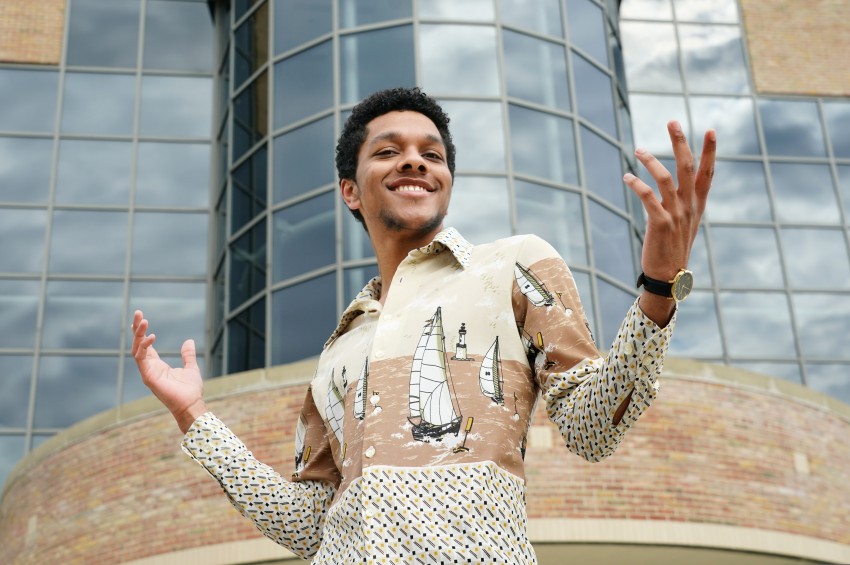 KALAMAZOO, Mich.—The world’s a stage, and soon Kobe Brown will be in the spotlight. The Western Michigan University graduating senior is looking forward to his first industry job, beginning a nine-month contract in August as a vocalist in “Big Band Beat” at Disneyland Tokyo.

He earned the opportunity to audition after a representative from the A1 Audition Conference in New York came to campus in fall 2019—one of many networking and professional experiences provided regularly to WMU theatre students. Brown was successful, he says, because of the skills he’s honed at Western.

“My training in musical theatre performance has prepared me to be competitive and unique in the field, while also preparing me to be a well-rounded adult that can advocate for and carry myself as a professional in the business,” says Brown, who grew up in Grand Rapids. “The individuality in a lot of Western grads is what sets alum apart from other schools. Everyone is encouraged to embrace what makes them different, as opposed to what makes them ‘right,’ and that serves us well as we train.”

Video of In the Spotlight

From participating in a number of WMU theatre productions, to performing in front of a packed room of industry professionals during the annual Music Theatre Showcase in New York featuring senior performance majors, Brown has relished the world-class training and opportunities he’s been given. But now, amid the COVID-19 health crisis, he appreciates his broader education even more.

“These are really uncertain times, and it is scary to think about the future as we near graduation. My time at WMU has included a wide range of classes and subjects that allowed me to develop new skills that could prove necessary now,” Brown says. It’s given him the ability to enter the job market with confidence in his ability to adapt to whatever situation he’s presented with.

The diverse connections Brown made at WMU have him excited to start his career halfway around the world in Japan.

“I have met lifelong friends within my major, as well as friends who aren’t in my major or even from this country. Forming relationships with people from different cultures and backgrounds has impacted the way I see and navigate the world.”

While he won’t get the traditional graduation he’d hoped for—the Department of Theatre will host a virtual ceremony as the pandemic has postponed commencement—Brown still has much to celebrate. A first-generation college graduate, he’s set the stage for the rest of his family to pursue higher education.

“It feels so good to know that I can be a role model for my niece and start the tradition for her as she grows up.”