Patricia Villalobos Echeverría, professor and area coordinator of printmedia, records a video for her machining class.

Broncos are always ready for a challenge. That ability to adapt and rise above was galvanized as the COVID-19 crisis swept the globe and campuses cleared out to mitigate the spread. From lecture halls to living rooms, the move to distance education changed the learning environment at Western Michigan University.

“I am pleasantly surprised by the efforts of the College of Fine Arts and their commitment to giving us the best possible education they can,” says Jolin Cramer, who completed her bachelor's degree in dance in April. “As students who are privileged with great studio spaces, virtual dance classes can be difficult, but we found a new way to normalize the circumstance and ‘crank our personal volume’ during a time of uncertainty.”

Jolin Cramer dances at home along with her class.

Dance is about conveying and evoking emotion through movement. Cramer had plenty of inspiration with the changes in response to the COVID-19 pandemic.

“Personally, my biggest challenge is dealing with the grief of leaving my senior year behind,” she says. “It was hard to process being a production major with no more productions, a dancer with no more performances and a student with no more warm-ups, naps in the student lounge or improv jams with my friends.”

Cramer had to come to terms with the fact the end of her college career would look a little different than she planned.

“My graduation dress came in the mail the day commencement was postponed—that hit hard. I was sad for a while and everything felt like a simulation, but then I got inspired. Inspired by my friends, faculty and people from all over the world who I have never met.”

While classes changed through distance learning, Cramer found comfort in sharing space with her classmates—even if that space was on a computer screen. Her classes met three times a day, and students would push their furniture aside or find a spot in the basement to dance in unison. The sessions quickly became her favorite moments of the day. 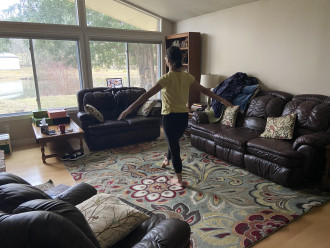 One class even had a virtual birthday party for a professor. Cramer and other students each held a candle and sang happy birthday, blowing out the flames in unison. Those classmates became her family, and WMU, says Cramer, became home.

“I have always been of the mindset that this is something much bigger than all of us,” she says. “I am not surprised by the constant support, uplifting messages and desire to help from the community. It’s overwhelming in the best way to know that we are all in this together.”

Learning via WebEx meeting isn't rocket science. If it was, though, Grace Dybing says her aerospace engineering instructors would have passed with flying colors.

"I think that they have done a great job with getting their classes online, and now when I put on my headphones it's just like being in the classroom," she says, adding professors have been able to keep the classes active by using chat functions.

"My project-based classes changed a bit more, and anything that was supposed to be a group presentation has become more challenging. But my professors have lots of ideas on how to make it work." 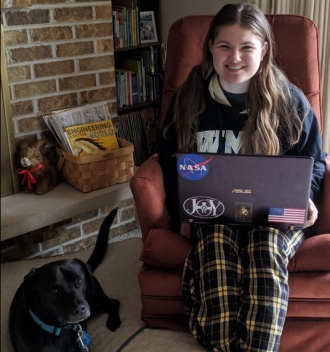 Dybing, who graduated in April, found software which allowed her and her senior design project partner to control their lab computer remotely. She also learned some new skills to help record lessons for the labs she ran as a teaching assistant.

"Learning how to edit the videos has definitely made me think creatively and in different ways than I'm used to," she says, joking that she could fall back on a career as a Youtuber.

Dybing admits being nervous when she first heard about the shift to distance education, but she's discovered the silver lining in new opportunities—like being able to go back and listen to lectures after class because they're recorded now.

"I think the faculty are working really hard to give us the best education they can, and it shows,” says Dybing.

It's not surprising the WMU community stepped up to adapt to this challenge. That, she says, is what Broncos do.

"They stick together in herds and put up a strong fight when threatened. I think our professors in particular, but also our maintenance and custodial staff, Dining Services and Residence Life, are doing a great job of getting us through this."

Leading From Behind (The Computer Screen)

For Lucinda Stinson, a part-time instructor in the College of Health and Human Services, the change seemed daunting at first.

"There was a wide range of emotions, running from fear to confidence that I can do this," says Stinson, who spent the weekend learning and preparing. "It really took a mental adjustment for me, because I'm a people person. I'm not overly computer savvy, but I know that I can figure it out."

WMUx—the evolution of Extended University Programs—spearheaded a campuswide effort to make the shift as smooth as possible, working around the clock to ease the transition for virtual classroom veterans and rookies alike. The program’s software engineers, design specialists, internet technology experts and the like managed to ramp up support services and structures within just a few days.

Instructors were offered assistance with online teaching fundamentals and delivery options during the transition. Stinson took advantage of the help available to learn about using WebEx. She says staff at the faculty technology center walked her through the steps and she was able to pick things up quickly. Plus, she had her daughter on standby if there was something she didn’t understand.

"She's a millennial," laughs Stinson, admitting that sometimes learning new technology can be a challenge. But she points out, she does have an advantage. "As a health care professional—I've been doing this for over 40 years—you always have to think on your feet. So, I can always go from Plan A to Plan B to Plan C very quickly."

Her flexibility and commitment to taking on the new challenge is something Dr. Edwin Martini, associate provost of WMUx, has seen from faculty members across campus. 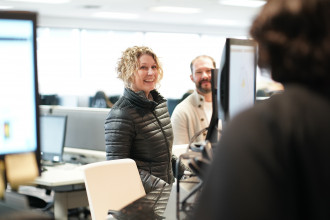 Provost Jennifer Bott and WMUx Associate Provost Edwin Martini talk to faculty on campus about how to approach distance education.

"At the end of the day, we're all in this together. Students are learning new tools, as well," he says. "Our staff worked long hours, into the night and throughout the weekend, to make sure that we could support our instructors and our students during this challenging time."

Martini says while his team braced for hiccups along the way, WMUx met an unprecedented challenge. Behind the scenes, staff orchestrated a remarkable effort that included things like:

As for students, in collaboration with the Office of Information Technology, WMUx designed, built and launched an Elearning student support site in about 36 hours that offers a wealth of general and detailed resources about many distance learning tools.

Simply put, without WMUx, learning at WMU would not have continued spring semester.

PREPARING FOR THE FUTURE

WMUx’s new name also comes with a heightened purpose to focus on human-centered solutions. Its full visual identity and name will be introduced everywhere next fall. The department, which has existed since the early 20th century as an “ideas incubator,” will continue to operate on the third floor of Ellsworth Hall on WMU's Main Campus. Meanwhile, it will eventually resume conducting a “listening” campaign to solicit wish-list concepts for how it can deliver next-level learning opportunities on and off campus with emerging technology, such as augmented reality and noteworthy pedagogical approaches.

Eventually, some of the concepts will be put into motion to benefit people such as Osher Lifelong Learning Institute participants, dual-enrollment students who are earning college credit while in high school, regional nonprofit workers, long-time professors and traditional students.

The unit's new name is in keeping with its tradition of offering extended learning, represents the next stages of education and serves as a creative capacity multiplier for programs and people across campus. Its "human-centered" focus relies on empathy, ideation and experimentation as those pertain to outcomes rather than capabilities.

"This entire transformation from EUP to WMUx represents a significant investment in the core academic mission of the University," says Dr. Jennifer Bott, provost and vice president for academic affairs.