Contact: Megan Looker
May 27, 2020
KALAMAZOO, Mich.— “Academic all-star” is a phrase that comes to mind to describe Emily Bosak.

The Loy Norrix High School and Kalamazoo Area Math and Science Center graduate is an honors student. She’s also bilingual, an accomplished violinist and concertmaster of the Kalamazoo Junior Symphony, a graduate of WMU’s Academically Talented Youth Program and the winner of two prestigious scholarships.

She’s now bringing her talents to Lee Honors College and the Bronson School of Nursing to achieve her dream of becoming a nurse anesthetist.

“I feel like nurse anesthetists are really important in regards to relieving pain,” Bosak says. “I feel like the best way for me to help other people is to relieve their pain.”

This exceptional student says she visited five nursing schools in Michigan and decided WMU was the best fit to continue her education.

“They have a great facility, state-of-the-art technology, wonderful instructors, hard-working students, a strong curriculum and good relationships with both local hospitals. I was actually looking for those qualities and found them at WMU. It was the only school that had them all, ” she says.

Bosak is no stranger to the brown and gold. She grew up watching shows, concerts and recitals at the Dalton Center Recital Hall and Miller Auditorium. She also attended the Seminar, a highly regarded School of Music summer camp, and dual-enrolled in Spanish courses while in high school. Additionally, her mother is a Chinese instructor at the University.

“The environment that you feel on campus, it’s not like anywhere else. Everybody treats you with respect,” she says. “WMU is really trying to make you feel at home.”

Bosak also has the opportunity to double major in Spanish at WMU. She already speaks Chinese and English at home, but she wants to expand her skill set for the future.

“I find the language and the culture fascinating, and I absolutely loved the Spanish teachers at WMU,” she says. “I think it will be an incredibly useful skill to know English, Chinese and Spanish, because it will help me as a nurse to better communicate with patients.”

With opportunities to take her well-rounded life to the next level, Bosak says no other university compared to Western, offering her more opportunities for academic excellence and personal growth.

“WMU has the resources of a bigger school, but it is small enough to make each individual feel special. While other colleges mostly relied on their reputation to recruit me, the admissions team at WMU made a huge effort to make me feel welcome on campus,” she says. “No other school came close to the personal attention WMU gave me.”

NO PAIN, NO GAIN

However, it wasn’t exactly a pain-free process to get here. Four days before the Medallion Scholarship competition—the most prestigious merit-based scholarship offered to incoming first-year students—Bosak had her wisdom teeth removed.

“Despite the fact that I was clutching my ice packs through the entire process, the judges liked what I demonstrated,” she says. 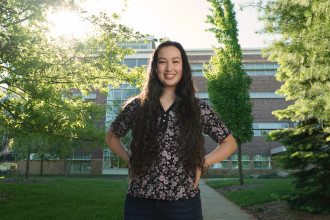 Bosak was one of 20 students selected out of more than 1,000 who competed for the Medallion Scholarship. She is also the only Heyl Scholarship winner for the Bronson School of Nursing this year.

“The experience was pretty unbelievable,” she says.

Between the two awards, which are stackable, Bosak will have all tuition, study abroad, housing, books and fees covered at WMU. She will even have extra money to put away for graduate school, where she wants to specialize in anesthesia.

“WMU presented me with more opportunities than anywhere else that I applied,” she says. “I can’t wait to start freshman year as a Bronco!”