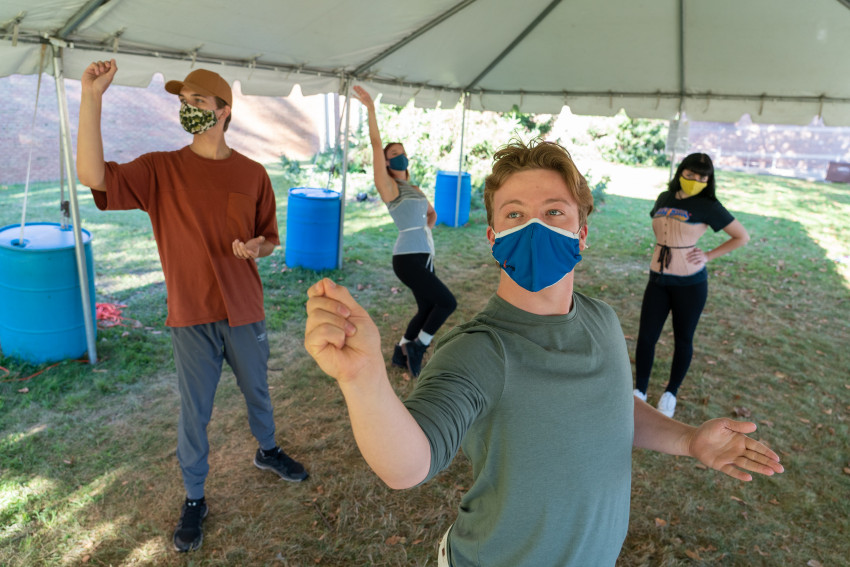 Marcus Jackson, in the foreground, and Ally Taylor, back right, rehearse under a tent for the WMU Theatre's socially distant, outdoor production of "Sunday in the Park with George."

KALAMAZOO, Mich.—Finishing the hat. It’s what painter Georges Seurat sings about in "Sunday in the Park with George," driving home his innate need to create art. And now, in bringing the Pulitzer Prize-winning musical to life on Western Michigan University's campus—outdoors, in masks, during a pandemic—student actors feel a unique connection to the message.

"It's a beautiful piece. It tells about artists who are struggling to communicate ideas and find balance in their lives—something that all artists are kind of grappling with right now," says Jay Berkow, director of music theatre performance, who is directing the show. 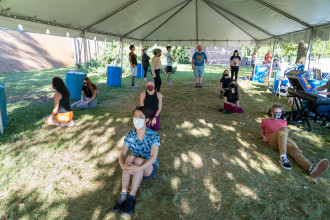 The entire production was reblocked to allow actors to maintain at least 6 feet of spacing between each other.

Initially part of WMU Theatre's spring lineup, COVID-19 stopped the production in its tracks. Several months later, most theaters across the country remain dark. But, with the return to campus this fall, Berkow saw an opportunity to think outside the box and give students and the community the live theatre experience they’d been missing.

"I remember the last rehearsal we had in the spring before everything was canceled," says Marcus Jackson, a senior music theatre performance major from Lansing. "I remember feeling like, 'Oh, this is probably it. This is probably the last time I’ll do this.' And now I'm here, and I'll never take it for granted again."

"These young performers are facing a world that’s so uncertain, and they don't want to give up on their training or their passion. So, I feel like it's my job, my responsibility and my passion to create any opportunity that I can," says Berkow. "The circumstances do allow these students to progress and grow as artists. And if I can create a safe live performance opportunity that works, then I will try to do that."

It's something not many theatre actors—student or professional—have the chance to do right now.

"An opportunity to share art in a time like this is huge," says Miranda Vandenberg, a senior music theatre performance major from Austin, Texas.  "Both of my parents work on the technical side of theatre, and they can't work right now. So, the fact that we get the opportunity to work and to put something on for a live audience, it's huge. And I'm so grateful to be a part of it."

A number of safety measures are in place to ensure the health of the actors, crew and audience, including mandatory face coverings for everyone—both during rehearsals and at the performance. To ensure ample room for physical distancing, audience capacity will be limited. Berkow also reblocked the entire show so that actors never physically touch and are able to stay at least 6 feet away from one another. 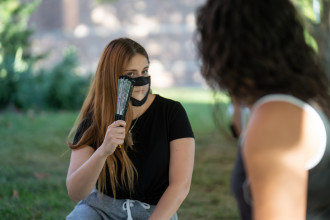 Actors will wear special clear masks so that the audience can see their facial expressions.

"It's been a really interesting new way of looking at theatre and finding ways to connect with your scene partner," says Ally Taylor, a junior music theatre performance major from Traverse City. "It’s been really special, actually."

Because facial expressions are a large part of the live theatre experience, Berkow purchased clear masks for each actor. They've also each agreed to semi-quarantine, meaning they limit contact with anyone outside of the production and adhere to strict safety guidelines.

"If we want to do this, then it’s up to us to be as safe and as healthy as we can," says Aaron Czarnecki, a senior music theatre performance major from Hastings. "Before starting rehearsals for the show, we all were in that place where we were just itching to get back to doing theatre. Now that we can, it feels great."

The production is about more than giving students a chance to perform, it’s about giving the community a chance to regain a bit of normalcy lost in the pandemic. 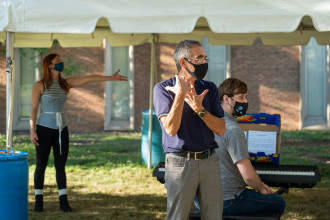 "The first day of rehearsal, as soon as they started singing, I started tearing up," says Berkow. "It's the first time I'd heard live music since March, and for someone who is used to seeing it every day, it's been really hard to have a big part of my life kind of gone away."

Performances will be held in Miller Fountain Plaza in front of the Richmond Center for Visual Arts. Opening night is Friday, Sept. 18, and the show runs through Sunday, Oct. 4. For more information and to purchase tickets, visit the department's website.

Inspired by the painting by Georges Seurat, "Sunday in the Park with George" merges past and present into beautiful, poignant truths about life, love and the creation of art. In the days leading up to the completion of his most famous painting, Seurat—played by Czarnecki and Jackson—is struggling to balance his art and his relationship with his lover, Dot—played by Taylor and Vandenberg. A century later, Seurat's descendant—also an artist named George—finds himself searching for his artistic path, but the answers to his future may lie in the past.