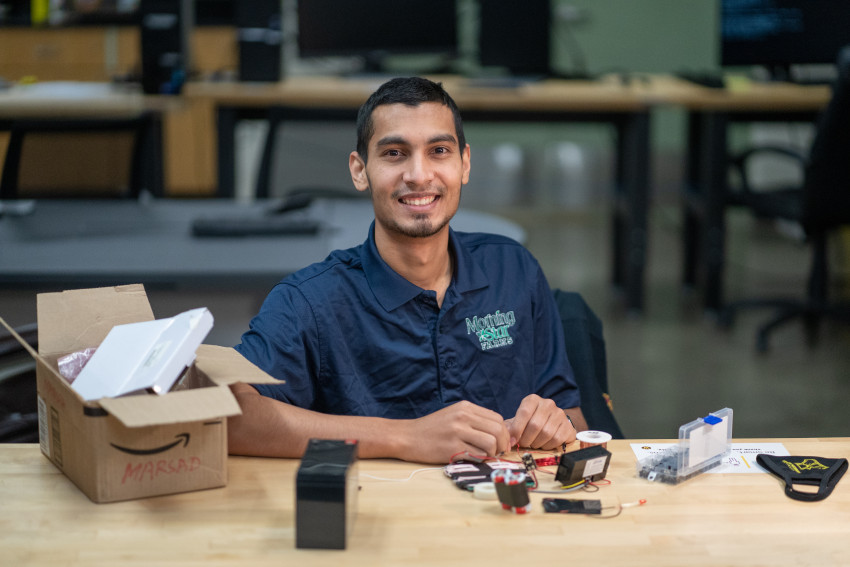 Md Marsad Zoardar works in a lab in Floyd Hall.

KALAMAZOO, Mich.—Objects in motion tend to stay in motion—unless they run out of power. That's a problem for the growing number of people around the world turning to electric cars, which are more environmentally friendly but pose charging challenges when traveling longer distances. But an innovative idea from a Western Michigan University computer engineering student could solve the battery buzzkill. Md Marsad Zoardar is working to develop a wireless power transfer system that could charge vehicles while they're in motion.

"Due to overdependence on fossil fuel, and as it is not renewable, the world is going to face a shortage really soon," he says, also noting the potential for a drastic reduction in carbon monoxide and greenhouse gases by shifting from traditional gasoline and diesel-fueled vehicles to electric.

There are some inconveniences to the cleaner mode of transportation, however. Cold weather can negatively impact battery life and reduce the vehicle's range, and charging stations aren't always readily available. 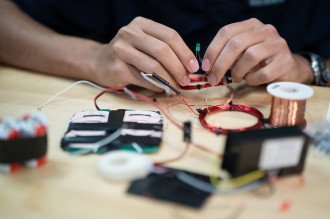 "Right now, an electric vehicle takes a lot of time to charge. So if you can make something like a grid line underneath the road, then we can transmit electricity to the car and it can run thousands of miles without even stopping," Marsad says—an enticing concept with global demand for electric cars projected to exponentially increase over the next two decades.

At first an idealistic hypothesis, Marsad's innovative ambitions were bolstered by an Undergraduate Research and Creative Scholarship Excellence Award from the Office of Research and Innovation. His project also took a top spot in the Bronco Big Idea competition, recognizing out-of-the-box thinking that could drive the future of scientific discoveries.

"I was so excited when I saw that I was selected," says Marsad, who is from Bangladesh. "It gave me courage and confidence to apply for more funding and continue to push forward with my research."

While the research was enough to create a potential prototype to demonstrate stationary wireless power transfer, he has high hopes to advance the project to a point of larger-scale development of in-motion transfer and testing.

"My plan is to come up with something real, something applicable, not theoretical," Marsad says. He hopes to secure more funding to advance the project and consider more practical ways to integrate wireless power transfer into a grid system that could be embedded in highways across the country and around the globe.

Marsad has expanded his knowledge of a variety of aspects of engineering while exploring autonomous technology with Asher. The field's interdisciplinary nature requires expertise in mechanical, computer and electrical engineering—broadening his future prospects.

"I have a diversified background of knowledge. I can go anywhere I want. I can go to the computer engineering side or I can move to the software sector as a computer scientist or software engineer. I can become a mechanical engineer," he says. "I have a whole world open in front of me."