Aviation grad ready for career to take off 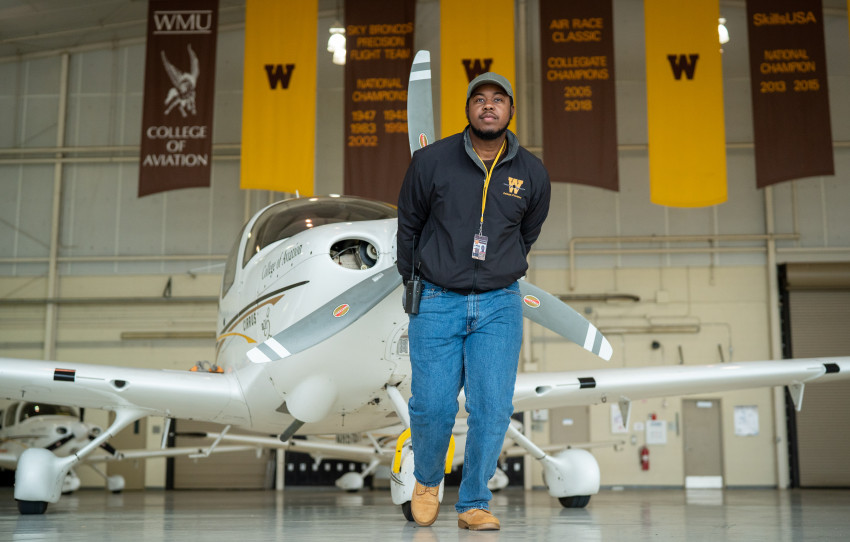 Dezmond Stover pulls an aircraft out of a hangar at the WMU College of Aviation.

KALAMAZOO, Mich.—While aviators have their heads in the clouds, there are a lot of people back on the ground working to keep them up there. Dezmond Stover is excited to be among them, passionate about making flight operations run smoothly.

"It's part of the aviation field where I can move around and interact with people on a daily basis," says Stover, who graduates from Western Michigan University on Saturday, Dec. 19, with a degree in aviation management and operations. 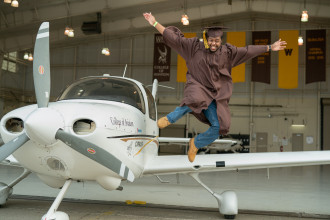 Stover earned a degree in aviation management and operations.

It's a path he landed on, in part, because his initial interest in becoming a pilot was grounded when he discovered he suffers from motion sickness in the cockpit. But, just as he's learned during his time at Western, the key to success is adapting to challenges.

"Many people are afraid of change, but the aviation industry is always changing. At Western I learned to adapt and also go into my life, not just my career, always open to changes, whether it's a career change, a family change or a life-changing decision."

Stover is a first-generation aviation professional. Originally from Detroit, he first saw aviation as a potential career path in middle school during a presentation on the Tuskegee Airmen.

"Not a lot of students learn about aviation at a young age," says Stover. As a member of WMU's chapter of the Organization of Black Aerospace Professionals (OBAP), he and his peers made it part of their mission to introduce kids to the career through school tours and other events. "We were able to get out and meet with the community and show students from diverse backgrounds the possibilities of the aviation industry. We tried to reach the younger audience that will come behind our generation."

Organizations like OBAP and the American Association of Airport Executives have also given Stover a platform to grow connections to launch future job opportunities. Networking, he says, is one of the biggest benefits of WMU's College of Aviation. 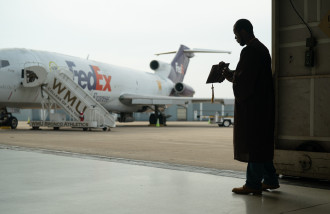 As Stover looks back on his time at WMU, it's the connections he made that he

"I've met incredible people through the aviation program. A few of my mentors here at Western and a few outside the industry are WMU alumni. They've told me what to expect coming out of Western and what I should do to prepare myself for different positions and careers, and how to better myself to get to those places," he says. "All the people I've met are amazing. They've helped me to figure out which path I really want to go on."

While at Western, Stover has gained valuable professional experience as a student employee. As a member of the College of Aviation's line department, he moves aircraft in and out of hangars, fuels planes and maintains other instruments around the facilities.

"I've been well prepared. Taking the position in the College of Aviation allowed me to get a head start on some aspects of airport operations," says Stover. "I feel like the programs have given me everything I need to be successful going into my first real career. I owe a lot to Western and to the professors who have taught me different life lessons—it's not just about what we learned in class."