Merze Tate: A trailblazing Western alumna who made an international impact

KALAMAZOO, Mich.—Professor. World traveler. Journalist. Inventor. This 20th century renaissance woman may not have made it to the moon, but Dr. Merze Tate's resolve to boldly blaze her own path puts her among Western Michigan University's brightest stars. Fueled by a thirst for knowledge and boundless ambition, she became the first Black student to receive a bachelor's degree from Western State Teachers College—which would later become WMU—in 1927. But the road to get there was not easy.

"She took the limits off herself, as an African American and as a woman," says Sonya Bernard-Hollins, a Western alumna and founder of the Merze Tate Explorers. "She lived her entire life with the attitude that, 'I'm not going to let that stop me. There may be some barriers, I may have to fight through them, but I'm not going to let that define me.'"

A young Merze Tate, left, stands with her mother, Myrtle, and brother, Keith.

The granddaughter of some of the first Black settlers in Mecosta County, Michigan, Tate's journey began on the dirt roads of Blanchard. Walking three miles each way from her family's farm to get to school, she memorized historical texts, poetry and speeches to pass the time.

"Her school history and geography books were like our Google today. She admired the places she learned about and was inspired as a kid to go to these places and travel the world," says Bernard-Hollins. "And she did it. She went every place she wanted to but outer space, and she actually bought a ticket for the first flight to the moon (with Pan Am Airlines), but it never happened. So the sky really was the limit for her!"

Tate was named valedictorian of Blanchard High School in 10th grade—an honor given to her after the school burned down and all students were awarded diplomas. It left her several credits shy of being eligible for college, an obstacle she was determined to overcome, knowing the key to achieving her dreams was in continuing her education. So, she found a job as a maid for a family in Battle Creek and moved there to complete her studies. She finished high school with a perfect academic record and her counselor sent an application for her to the University of Michigan. She was accepted, only to have the offer revoked when the school found out she was Black. Tate's employer, however, had another idea. 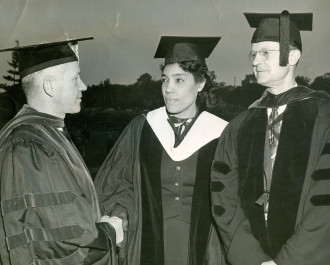 "Back then, a lot of wealthy people were connected," Bernard-Hollins says. "Her employer told (Western President) Dr. Dwight Waldo, 'We have this amazing student working for us but no one wants to accept her into college.' He accepted her right away and provided her a scholarship."

Waldo also connected Tate with a family looking for a maid in Kalamazoo. She worked at their home on South Street and was able to have room and board while she attended Western. "All these people were connected in her life in different ways to help her get to where she needed to be."

Tate didn't waste any time working toward her bachelor's degree in education, graduating just three years after she enrolled.

"When she graduated, even though she had the highest academic record in the school's history, she couldn't get a job teaching in Michigan because they weren't hiring Black teachers," Bernard-Hollins says.

Waldo and other Western faculty members didn't want Tate's promising career to end before it even had a chance to start, so they started making calls, appealing to districts all across the Midwest. "Western was always near and dear to her heart because of the belief all of them had in her."

Tate eventually landed a job teaching history at Crispus Attucks High School in Indianapolis—a school created by the Ku Klux Klan to keep Black students segregated from their white peers. Alongside other educators of color who excelled in their studies, she saw an opportunity to show Black students what the future could hold.

"Many of (the students) were inspired by their teachers, because their teachers went to college in the summer, they traveled the world and then they would come back and share their experiences," says Bernard-Hollins, who interviewed several Crispus Attucks alumni. Tate earned her master's degree from Columbia University while she was teaching at the high school and also took night courses at Indiana University to expand her language skills. "When they saw other African Americans doing these things, they knew the sky was the limit for them. They had no barriers. Some of them became Tuskegee Airmen and doctors; a lot of these students became significant in their communities and in their professions."

Tate also opened doors for her students to experience civics and history lessons in person, creating a travel club to take groups on field trips all across the country. 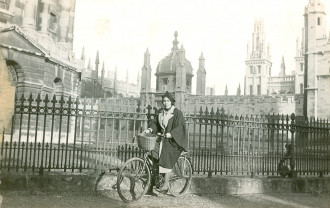 Tate with her bike at Oxford University.

In 1932 she followed her travel bug to England, earning bachelor's and doctoral degrees in international relations from Oxford University—the first African American to do so. Her advisor, Sir Alfred Zimmer, was an expert in disarmament and opened her eyes to a new field of study.

"He encouraged her to write a paper on disarmament and how arms would affect the world and basically nuclear weapons as we know now. So, she was ahead of her time," Bernard-Hollins says. "She was an expert in that and was even invited to talk with General (Dwight) Eisenhower about some of the things related to disarmament. She was amazing."

Tate traveled extensively while in Europe, spending summers in France where she tutored the daughter of a countess. She also studied German at the University of Berlin—one of five languages she became fluent in—and, seeing Hitler's rise to power firsthand, decided to return to the United States where she shattered another barrier at Harvard University's Radcliffe College, becoming the first Black woman to earn a Ph.D. in government and international relations.

"She was very focused, very determined," Bernard-Hollins says. "While she didn't march or protest, her whole focus was fighting racism through education. She thought, 'If I can educate myself and educate others to have careers and skills that the world will need, then that is the ultimate civil rights movement.'"

Tate went on to teach at several historically Black colleges before arriving at Howard University in 1942, where she remained for 35 years. But she didn't stop traveling. In fact, she circled the globe multiple times as a Fulbright Scholar and journalist, was one of only three Americans chosen to represent the United Nations' Educational, Scientific and Cultural Organization (UNESCO), and worked as a photographer, filmmaker and researcher for the U.S. State Department—all while teaching college students. And on top of her academic, political and cultural achievements, she even had time to secure patents for a refrigerator mixing unit she designed. 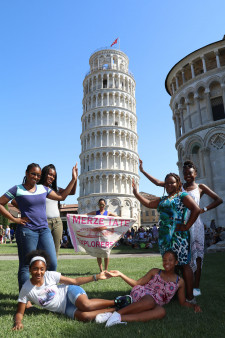 Sonya Bernard-Hollins, center holding a banner, has taken the Merze Tate Explorers all over the world, including to Italy.

Inspired by Tate's extraordinary life, Bernard-Hollins created the Merze Tate Travel Club—now Merze Tate Explorers—in 2008 with the help of a grant from the Kalamazoo Community Foundation. She gathered a group of girls to learn about Merze Tate and open their eyes to new experiences and possibilities. Their first trip was an Amtrak ride to Battle Creek to visit the Sojourner Truth Institute and take an Underground Railroad tour.

"It was the first time those kids had ever been on the train, the first time they'd ever been to Battle Creek," says Bernard-Hollins. "It was just like, this is supposed to be. This is an organization that I really need to move forward because Merze Tate's legacy is so amazing. And because she didn't have any children, it just seems like we are the ones who need to keep her legacy alive."

Over the years, the Merze Tate Explorers have interviewed women leaders, visited Fortune 500 corporations, traveled internationally and explored college and career opportunities. They've documented their adventures in magazines and on video—harkening back to Tate's time as an international correspondent for the Baltimore Afro-American newspaper—each girl finding a different way to carry on Tate's legacy. 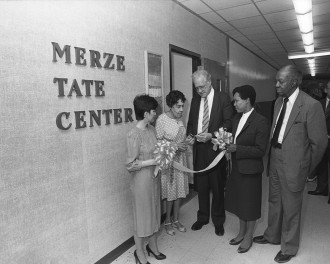 Tate's impact is also evident on Western's campus in Sangren Hall, where she helped establish the Merze Tate Center. After renovations, the College of Education and Human Development named the Merze Tate Grant and Innovation Center in her honor. The center promotes research, innovation and grant and contract acquisition within the college. Tate also donated $1 million to establish the Merze Tate Student Education Endowment Fund at WMU as well as endowments for two Medallion Scholarships. Given the Distinguished Alumni Award in 1970, her gifts have helped countless students pursue their dreams on the trails she blazed before them.

"Tate's life was dedicated to letting students know that they had value, there was a place for them in the world and they should go out and discover it just like (she did)," Bernard-Hollins says. "The sky was the limit to her. And I think looking at her life, people should take from that you only limit yourself. Because if you take the limits off yourself, there's nothing that you can't do."