Raising the bar: Gymnast and dietetics major hoping to take on new challenges in military

"I feel like gymnasts are a different breed, because we strive for perfection all the time," she says.

Now, as she prepares to graduate, the student-athlete is looking forward to her next challenge—as a soldier. 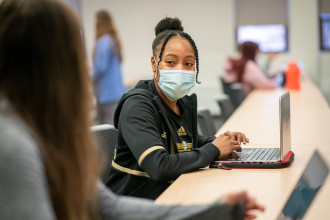 "I got my degree in a career that I want to pursue, and I'm just going to be excited for the next chapter," says Harrison, imagining what she'll feel as her name is read during commencement. She hopes to build on her bachelor's degree in dietetics by entering the U.S. Military-Baylor Graduate Program in Nutrition, which will put her on track to earn a master's degree while serving in the Army.

The structure of a military career is nothing new for Harrison. Her father, a retired soldier, served in the U.S. Army for more than 20 years.

"(Joining the military) is something I've always wanted to do," she says.

"As a kid, I was such a daredevil. I would throw my body across the yard doing tons of cartwheels and back walkovers, and I love monkey bars. I begged my parents: 'Please put me in gymnastics!’"

She was around 8 years old when she started training—a late bloomer by gymnastics standards—but she picked up the skills quickly, determined to excel in the sport. "I guess everything worked out how it was supposed to, because I ended up where I wanted to be down the line."

That goal was to be a Division I student-athlete, competing at the highest level she could. During a gymnastics camp at Western her junior year of high school, Harrison saw herself realizing that dream as a Bronco. 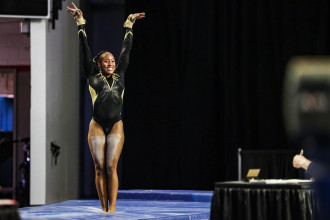 "After a week on campus, I thought, 'This is where I want to be,’" says Harrison. "I loved the culture, the atmosphere in the gym, and also the fact Kalamazoo is kind of a small town but not too far from Chicago…and I just felt like this was home. I felt like this is where I belong."

It's also where she has thrived—finishing her gymnastics career as the Broncos' top scorer on the bars during the NCAA Gymnastics Championship regionals in April—the team's first NCAA regional appearance since 1981.

"It's an honor to be a part of a team that made history. To me, it's surreal that we had the opportunity to compete and to represent WMU," she says, adding qualifying for regionals has been a team goal since she was a freshman. "This program has transformed and evolved over the course of four years, and I'm glad to be part of the transformation."

Harrison learned the impact of good nutrition as a young athlete.

"I found out early what I put into my body really impacted my performance," she says. Her passion to share that knowledge has only grown since enrolling at Western. "I've always wanted to help people and educate them on the importance of nutrition and their health."

In addition to building her knowledge and nutritional prowess in the classroom, Harrison's experience as a student-athlete helped her develop intangible skills as well.

"I really had to improve my time management and really commit," says Harrison. "You can't procrastinate, you have to be more organized, and I feel like that shaped me into who I am now, as a senior student-athlete."

She also had a chance to pursue a cause she's passionate about as an inaugural member of the WMU Athletics Diversity Task Force—an organization comprised of Western coaches, athletic department staff and student-athletes with the goal of advocating for inclusion, racial equity and social justice. 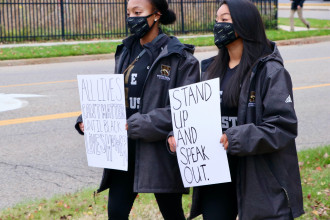 Harrison, left, participates in a walk against social injustice on Oct. 30, 2020, alongside other Western athletes.

"I helped organize a walk against social injustice. Seeing all the athletes from different sports teams come out to support and walk along campus sidewalks was very impactful for me, because we're better off united than we are separated," Harrison says. "It was a huge message to show the community…we support each other, we are united, and we're better and stronger together. And that we have a voice."

Harrison characterizes her four years at Western as a time for tremendous growth, learning from mistakes and charging through challenges. The diversity of experiences and opportunities to put her passion to work make graduating bittersweet.

"I'm not defined as one thing—not just a student, not just an athlete," Harrison says. "I have many roles and other characteristics that make me Stacie Harrison, and all my experiences here at Western helped mold me into that person. And I will be forever grateful for that."

Find more information about the dietetics program on the Department of Family and Consumer Sciences' webpage.