WMU Theatre kicks off 2021-22 season with focus on connection, equity

KALAMAZOO, Mich.—After a year and a half of isolation, adaptation and innovation, Western Michigan University's Department of Theatre is back with a full season of in-person performances.

"It's exciting!" says Dr. Joan Herrington, chair of the Department of Theatre. "I think the theme  for this year is reconnecting. We know a lot of our patrons have been coming for years, and we're so excited for them to be able to come back. I think we learned that being able to be safely in community with each other is crucial to people's well-being." 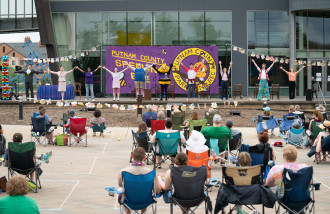 WMU Theatre presented "The 25th Annual Putnam County Spelling Bee" in May 2021 outside the Richmond Center for Visual Arts.

Building on the success of Western's outdoor performances that ensured the show still went on safely during the pandemic, the first two productions of the fall season will also be outside.

"We have worked with Western's fabulous Landscape Services team, and the courtyard behind York Theatre has now been cleared out and mulched," says Herrington. "It's great to do shows outside; when the sun goes down and the lights come up, it's really magical."

The season kicks off Thursday, Sept. 16, with a 21st-century twist on "Lysistrata," an ancient Greek comedy about women trying to end the Peloponnesian War by withholding sex from their husbands until they negotiate peace.

"On one hand, ('Lysistrata') is incredibly progressive. On the other hand, it's incredibly misogynistic and deeply based on binary relationships," says Herrington. "So we commissioned a playwright from New York whose reboot is very loosely adapting it such that at issue is climate change and not war. And it's not only the women who are withholding sex, it's all partners; so there are many different relationships at play."

The adaptation is the result of ongoing work within WMU Theatre to encourage equity and inclusion in its programs and productions.

"I think theatre has been justly called out, as many institutions have, for having a long history of having the vast majority of decisions being made by largely white contingents, many of whom were raised in those institutions and are carrying with them the systemic racism that plague pretty much every institution in this country," Herrington says.

"We are working to respect and acknowledge the need to have more voices in the conversation and really voices that have been marginalized in the American theatre."

The process began with giving students a larger voice in programming decisions. A town hall discussion cultivated conversations about the values they felt the department should uphold in performances for the upcoming season. The department also reached out to alumni as paid consultants to ensure there were an array of voices at the table in the decision process. 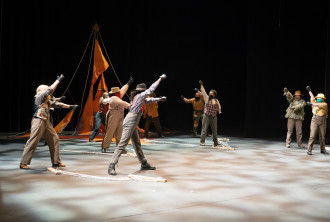 A performance inside Shaw Theatre.

"We wanted to make sure we had people representing a lot of different lived experiences: alumni of color, people from the queer community, the trans community, people for whom there has not traditionally been as much space at the table," says Herrington.

"We had great conversations. It was a really long process that took several months. It meant that really, far more aggressively than we have done in the past, we examined show suggestions that came to the table, weighing them against the values we want to uphold."

Two alumni of color have also been hired to serve as cultural competency coaches for rehearsals and productions for this coming year.

The process led the department to choose several productions that have never been on stage at Western. The fall WMU Theatre 2021-22 lineup includes "Lys," "Into the Woods," "Sweat," "Significant Other" and "Next Stop, Broadway!" with Broadway actor Darius DeHaas performing alongside senior music theatre performance students. The spring lineup includes "The Exonerated," "Emilia" and another musical still under consideration. Season passes are available to purchase online; tickets for individual performances will go on sale Wednesday, Sept. 1. Visit the WMU Theatre webpage for more information.