KALAMAZOO, Mich.—It was a way to connect with his passion when theaters around the globe went dark during the pandemic. Now a year and a half later, Western Michigan University theatre student Henry Lee is about to see his unique Lego hobby take center stage in New York City on the same weekend he takes the stage to kick off the new WMU Theatre season.

"I'm so unbelievably ecstatic to be sharing both of these things; I think I might combust!" says Lee, a junior music theatre performance major from Vancouver, British Columbia. 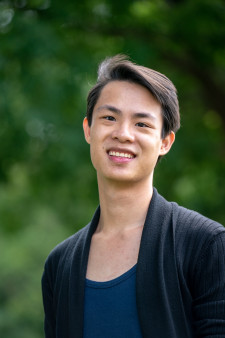 The exhibit is the culmination of a creative endeavor Lee began early on in the pandemic, searching for a way to express his love for theater and fill his newfound time in the absence of physical theater productions. Having loved Lego growing up, he turned to designing his favorite iconic Broadway sets in brick form.

"I just wanted to use my skill set with Lego and set design and building to share my love and pure awe of the work of these designers," he says. "It's really an honor to share their work."

Lee taught himself how to build designs virtually with a computer program—much more realistic than buying thousands of bricks on a college student's budget. Feeling the weight of isolation, he decided to create a social media account to share his work with members of various theater communities he belonged to; Lego Broadway Sets was born.

"I thought it would be a great way to bring the Lego community and the theater and performing arts community together in celebration of Hal Prince but also theater and musical theater in general," Lee says.

His intricate and innovative work began with some of his favorite set designs with a heavy dose of his idol: Hal Prince. They earned him fans around the globe, including some of the families of the original set designers.

"I think, especially during the pandemic, people felt like they could experience these pieces of art, especially those who had seen the productions. They could relive it, even though the whole industry was down," says Lee. "It just reminds me of why we create art."

The designs also caught the eye of Doug Reside, curator of the New York Public Library's Billy Rose Theatre Division, who had created an exhibition dedicated to Prince.

"I loved seeing Henry's set designs become an online sensation early in the pandemic not only for their playful take on Broadway sets, but because inspiring creativity is part of the Library for the Performing Arts' mission, and Henry's sets are so creative," says Reside. 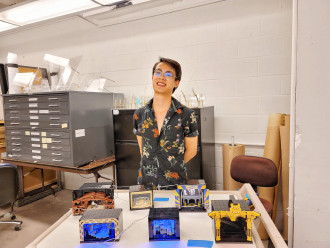 Lee prepares his sets for display at the New York Public Library for the Performing Arts inside Lincoln Center.

That connection eventually led to Lee's miniatures finding a home in the library. He flew to New York recently to deliver the models, which will be displayed near the front of the facility for everyone to see. He also finished some of the builds, installed electronics on the displays and helped conceptualize the final set configurations while he was there.

"It is an absolute pleasure to display his works here at the library alongside the materials that inspired him and a delightful opportunity to welcome visitors back to our space," Reside says.

"(Being there) was a surreal experience," adds Lee. "It's very much an honor to have my work be displayed alongside all of Hal Prince's legacy; it's incredibly special to me. I really hope this does him proud."

His work won't stop with the Big Apple show. Theater educators have also reached out to Lee about using his designs as a platform for their classes to explore theater in the digital age. There's even talk of collaborating with 3D animators to bring Lee's creations to life with "Lego Movie"-style productions.

"It's just so cool that my work can be used as a way to not only expand the boundaries of what theater artists can do but also … to create new work that can be at the forefront of the development and continued creation of new pieces and art in times to come," he says.

Lee's exhibition at the New York Public Library runs through Dec. 10. He'll have to miss opening night in NYC, however, so he can star in Western's world premiere of "LYS," a modern spin on ancient Greek comedy "Lysistrata." And, in a coincidence fitting of the journey he's taken from stage to brick builder and back again, he plays the role of Hal.

"LYS" runs Sept. 16 to 26 outdoors at the York Theatre Courtyard. Tickets are available on the WMU Theatre webpage.