Bronco lineman recognized among elite student-athletes in the nation

KALAMAZOO, Mich.—At 6'4" and 300 pounds, Mike Caliendo is an intimidating presence on the football field. His physical stature makes him a natural to hold the offensive line, but it's his academic stature as a top graduate student at Western Michigan University that's earned him national recognition.

Caliendo is a finalist for the William V. Campbell Trophy. Often referred to as the "Academic Heisman," the award goes to the best student-athlete in the nation for combined academic success, football performance and exemplary leadership. 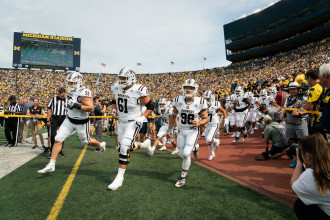 Caliendo, No. 61, leads the team onto the field at Michigan Stadium.

"It's a true honor," says Caliendo, whose GPA was 3.9 when he earned a bachelor's degree in biomedical sciences from Western in 2019. He currently boasts a 3.88 GPA and is on track to graduate with his master's in biology in December. "Everything I do, I do it to the best of my ability. And I think hard work pays off eventually."

All 13 Campbell Trophy finalists receive an $18,000 postgraduate scholarship as members of the 2021 National Football Foundation (NFF) National Scholar-Athlete Class Presented by Fidelity Investments. The winner, who will be announced at the NFF Annual Awards Dinner on Tuesday, Dec. 7, in Las Vegas, will see his scholarship increased to $25,000. 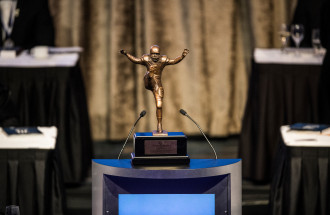 The winner of the William V. Campbell trophy will be announced on Tuesday, Dec. 7.

"It will definitely help pay for medical school, so I'm excited about that," Caliendo says. He's applied to several medical programs and is eagerly awaiting responses. "I'm very grateful to the NFF and all they do helping us out. It'll definitely get put to good use!"

Caliendo is the fourth Campbell Trophy finalist for Western, including former quarterback Zach Terrell who won the trophy in 2016.

"These young men have an unrelenting commitment to excellence in all aspects of their lives, and they represent all that is right in college football," says Archie Manning, NFF chairman. "As strong leaders in the vein of the trophy's namesake, Bill Campbell, they all serve as living examples that the future for football is bright."

A FUTURE IN MEDICINE

Medicine is, at its roots, a field built on helping people. It's a fitting career path for someone who excels at protecting people—a central goal in Caliendo's position on the offensive line.

"We pride ourselves in not letting our quarterback or running backs get hit, or at least making sure they get hit as little as possible. And in the medical field, preventative medicine is just as important to reacting to what someone already has. So there definitely is a relationship," he says.

In 2018, Kansas City Chiefs lineman Laurent Duvernay-Tardif became the first active NFL player to graduate from medical school. Last year, he took the season off to serve on the front line against COVID-19. Caliendo hopes to follow his lead.

"It's fun to see someone with the same passion I have in both football and the medical field," he says. "There's plenty of room to have more than one passion in your life, and he did a great job of showing that." 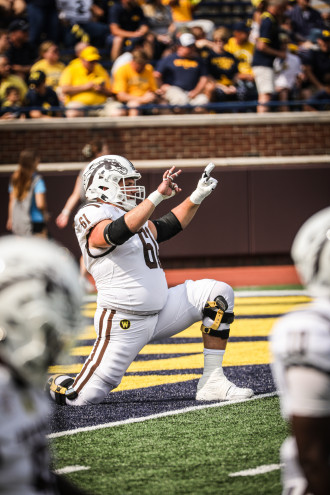 Caliendo is a leader on the field.

A 2020 First Team All-MAC selection, Caliendo's dreams aren't unwarranted. His stats on the field are impressive: He didn't allow a sack or quarterback hit all season last year, and his blocking skills have put the Broncos among the top offensive teams in the Mid-American Conference (MAC).

"It's really about putting your all into everything you do, wherever you are at any given moment. And then when you get to the next thing, you give all your effort there," he says of his achievements both in the classroom and on the field. "That mindset, I think, is how I was able to do both school and football at the same time and excel at them as well."

Both football and medicine are also about preparation, something Caliendo says Western gave him in spades through challenging coursework and world-class faculty.

"All of the professors in the biological sciences department, their passion for biology is tremendous, and it's really fun to learn from them. You can really tell how much they care about it and how much they want to spread their knowledge to their students," he says, crediting the faculty for much of his success. "It's a team effort, so those professors—most of my awards should be given to them, too."

As much help and encouragement he found in the lab, Caliendo also found access to experiential learning crucial to his development as a future medical professional.

"There are so many different opportunities at Western, whether it's a job fair or professional school fair, that can open your mind to different pathways you could take in your career," he says. Through those opportunities, Caliendo has had a chance to intern with an orthopedic surgeon, gastroenterologist and anesthesiologist—a profession he's grown very interested in.

"Anesthesia involves chemistry, biology, pharmacology, many different things. And every department here at Western is awesome. They all set you up perfectly to go to medical school and be a great medical professional," he says, adding he will wait until later in medical school to determine a specialty. Ultimately, he wants to "not only challenge myself every day but also my patients to be better on a daily basis and help them live the happiest, healthiest lives possible."

Strong leadership and citizenship are important qualities in Campbell Trophy finalists, and Caliendo has shown his dedication to service throughout his Western career. He believes it's a responsibility for anyone in a position of privilege, and he doesn't take it lightly. It's a mindset that's earned him recognition as a semifinalist for the Wuerffel Trophy, college football's premier award for community service, for the second year in a row. 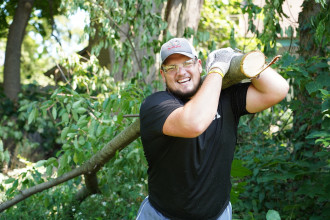 Caliendo clears a tree from a lot in Kalamazoo so that Habitat for Humanity can build a home for a family in need.

"Everyone who is in a situation where their voice can be heard needs to be giving back to their communities," he says. "Our football program does a great job of finding community service opportunities for us to participate in."

During his time in Kalamazoo, Caliendo has served meals at Ministry with Community, worked with children at the YWCA and in local school districts, completed service at the Kalamazoo Gospel Mission, filled sandbags to shore up flooding in neighborhoods, and cleared trees and brush from lots for Habitat for Humanity.

Broncos Tim Hiller (2009) and John Wassink (2019) previously won the Wuerffel Trophy. Caliendo will find out if he follows in their footsteps on Thursday, Dec. 9. Whether he brings home the hardware or not, Caliendo already feels like he's won.

"I think one of the most important things you can do as a human being is serving and giving to those who are less fortunate than you."