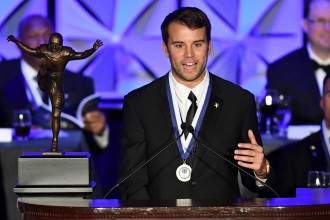 Terrell is currently pursuing his master's degree after graduating with a 3.66 grade point average in finance last December. A two-time Academic All-MAC selection, he was twice named a MAC Distinguished Scholar-Athlete and is a six-time member of the Dean's List. The Fort Wayne, Indiana, native was the 2015 recipient of the John Gill Scholar-Athlete Award.

In his career, Terrell has led the Broncos to three consecutive bowl berths, including the first bowl victory in school history at the 2015 Bahamas Bowl. He boasts the top two single-season completion percentages in program history and owns the record for most career passing yards with 11,947 yards. He is second in passing touchdowns with 95.

Terrell has twice been named the MAC Scholar-Athlete of the Week in 2016. An avid community volunteer, Terrell was named to the 2016 AFCA Good Works Team. He has received multiple awards for his service, including the 2014-15 WMU Community Service Award, 2014 Idaho Potato Bowl Humanitarian Award and 2014 WMU Coxswain Spring Leadership Award. Terrell led a mission trip to the Dominican Republic, serves as a leader in the Fellowship of Christian Athletes, and mentors students at Tree of Life. A Special Olympics volunteer, he has volunteered for MLK day of service, visited children at Bronson Children's Hospital, and participated in the Project Incentive Christmas program. Terrell has also served food at shelters, volunteered at football camps, and donated his time as a guest speaker for various organizations.

The William Campbell Trophy is named in honor of the late Bill Campbell, the former chairman of Intuit, a former player and head coach at Columbia University, and the 2004 recipient of the NFF's Gold Medal, who passed away this year on April 18. The award comes with a 25-pound bronze trophy and a $7,000 increase in postgraduate funds for a total scholarship of $25,000. A total distribution of $223,000 in scholarships were awarded Dec. 6, pushing the program's all-time distributions to more than $11.1 million.