Data collected over the past century indicates a high probability lower Michigan will see more lake-effect snow than average this winter.

KALAMAZOO, Mich.—Winter is coming, and it could be a snowy one in Southwest Michigan. Dr. Lei Meng, associate professor of geography, environment and tourism at Western Michigan University, studies the impact of climate variability on precipitation. His recent comprehensive study on lake-effect snow in Michigan's lower peninsula—the first of its kind for this region—uncovers the factors that ramp up the Lake Michigan snow machine. 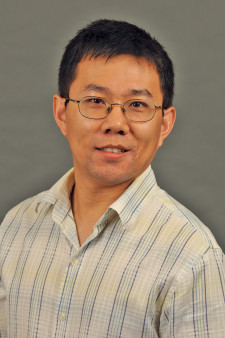 The warm phase of ENSO is known as El Niño, and the cold phase is known as La Niña. The latter, which is expected this winter, tends to bring much more lake-effect snow to the region.

"In lower Michigan, we tend to see a slight decrease in air temperatures over time, which means we are getting colder. That might explain why our lake-effect snowfall and our annual snowfall are slightly increasing," says Meng.

Lake Michigan's temperature is currently at a 25-year high. As evidenced by Meng's research, that statistic alone doesn't necessarily mean there will be more lake-effect snowfall this winter. However, based on the current prediction of La Niña conditions in the tropical Pacific, Meng sees a high possibility of more lake-effect snow than average in lower Michigan. 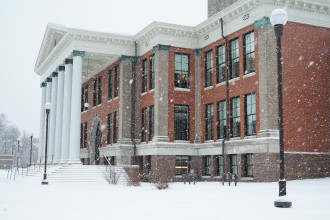 "It's not just the warm lake or the cold air; it's the differences (between them). The larger the air (and) lake temperature differences, the more lake-effect snowfall," he says.

As climate change continues over the next few decades, Meng expects the potential for more intense precipitation, including snow in the winter months, to grow.

"Global warming does not necessarily mean everywhere is warmer or every season is warmer. Some may see more extreme weather events occur more frequently," he says. "Lake-effect snow intensity might increase because our lake temperature is increasing, leading to a bigger air (and) lake temperature difference."

In addition to Meng's lake-effect snow research, which was published in the Journal of Great Lakes Research, his recent work on interannual variability of snowfall in Michigan's lower peninsula can be read in the journal Frontiers in Water.