Nik McNees says he thrives off the game day atmosphere as a member of Western's dance team.

KALAMAZOO, Mich.—Nik McNees grew up in an athletic family. The son of a varsity football coach, he tried just about every sport. Nothing seemed to click—until he found dance.

"I was four when I took my first dance class and I started competing at six," he says. "It's always helped me express my feelings while still being athletic. And just like any other sport, it has an amazing team-bonding aspect."

More than a decade later, he has connected that passion with purpose as a dance student at Western Michigan University.

McNees hopes he is opening the door for more males on the dance team in the future.

"My biggest draw was Western's dance program; the faculty includes some of the bigger names in the dance world that are so relevant. I just thought it was so cool they offered that so close to home," says McNees, who grew up in Portage, Michigan.

The University also has a competitive dance team, which McNees was eager to try out for this year once his schedule allowed it.

"I just thrive off of the game day atmosphere, both being in front of people and next to other student-athletes who share my same passion," he says.

McNees nailed his audition and became a trailblazer in the process as the first male member of Western's dance team.

"I've always felt welcome on campus, and I think that especially helped me feel like I could try out and be a very accepted member of the dance team," McNees says. "Even going back to my freshman Welcome Week and all the orientation groups and icebreakers, things like that, I never felt like I couldn't be myself."

Reaction from fans, says McNees, has been overwhelmingly positive. He often gets recognized by other students walking around campus.

"It really gives validity to what I'm doing. I was even at Sindecuse the other day and a nurse told me she goes to football games to watch the dance team and she noticed me," he says. "It's always cool when people notice what you're doing."

McNees hopes he's opened the door to even more dance team diversity in the future.

"Something I've always wanted to change is the gender roles in dance," he says. "I would love after I graduate to see another guy on Western's team. I think having public knowledge that a male can do this too is really important."

The dance team performs at Bronco football and basketball games. Aside from the thrill of hyping up a crowd of fans, McNees is looking forward to competing in the National Dance Alliance Collegiate National Championship in Daytona Beach, Florida, in the spring. 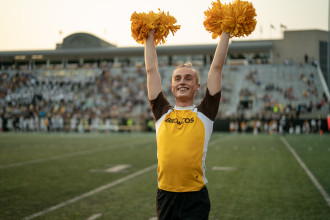 "It gives me something to look forward to and to work toward in addition to academics," he says.

While dance is definitely part of his future career plans—his experience on the Bronco dance team has him leaning toward trying out for an NFL dance team after graduation—McNees is grateful to have the broad base of skills he's developing in Western's dance program.

"I really want to do more of a commercial route than concert dance, so my sophomore review involved advice on making a website to market myself well, getting clean pictures of myself, making sure I'm fully representing whatever I can offer," he says. "I think Western does a really great job of identifying students' paths and tailoring them for what they want to do."

McNees also appreciates the holistic approach to academics he's encountered at Western as opposed to a traditional conservatory dance experience.

"I'm definitely glad I chose to go to college. It's given me a lot of insight into things I wouldn't have done otherwise," says McNees. "I'm taking a critical thinking and politics class next semester that I would have never even thought about taking in high school. It's really broadened my horizons."