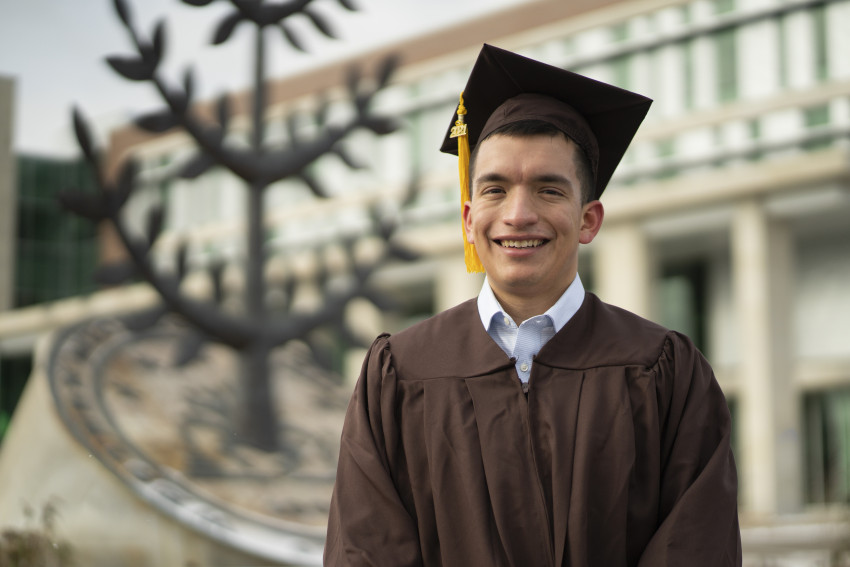 Luis Jaime will graduate from Western with a degree in aviation technical operations and a job waiting in the wings at Spirit Airlines.

KALAMAZOO, Mich.—Luis Jaime has been dreaming of a career in aviation since he was a kid.

"I was amazed every time I would fly in an aircraft. I always wanted to see how they worked and loved seeing them fly over me when I was outside," he says. "Ever since I had my first ride in a small airplane, I knew that was the thing for me."

Now as he prepares to graduate from Western Michigan University with a degree in aviation technical operations and a job waiting in the wings, he's seeing that dream come full circle. 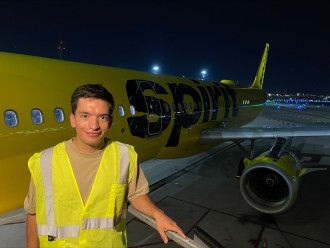 Jaime completed an apprenticeship with Spirit.

"I was down working on an airplane on the tarmac and there were kids up in the terminal waving at me," says Jaime, who is completing an apprenticeship with Spirit Airlines at Chicago O'Hare International Airport and will become a mechanic with the company after graduation. "I was just like them when I was a kid, and now it's me they're looking at."

Growing up in suburban Chicago, Jaime envisioned a future as a pilot. As he got more serious about the industry in high school, he began visiting college fairs with an eye for top aviation programs. Western stood out, and he decided to attend back-to-back summer camps at the University's College of Aviation. A spin in the college's "Super D," the aerobatic aircraft used to train students on emergency maneuvers, had him hooked.

"Those experiences (such as the Super D flight) showed me how it could be a great career. I got the feel of what this kind of major in college would be like and whether this was what I wanted," he says. "The summer camp showed me the different things the college had to offer. I would tell others that the summer camp is a great way to experience aviation if they don't really have a background in the industry before coming to WMU."

Nighttime vision concerns grounded Jaime's aerial pilot ambitions, but he found his footing in aviation technical operations, learning the ins and outs of aircraft mechanics and maintenance. Western's state-of-the-art facilities and top-tier programming set the University apart and helped put Jaime ahead of his peers in terms of career preparation.

"I have friends who went to Purdue who sometimes tell me, 'I wish we went to Western instead.' Western brings all the top resources and continues to advance technology, because technology in the field is advancing too."

It's why Western's aviation program is consistently ranked among the top in the country, catching the eye of many industry professionals. WMU has the only collegiate aviation program in the nation to land partnerships with United Airlines' Aviate, Delta's Propel and AAR's EAGLE Career Pathway Program, offering students a clear pathway to a career through training and mentorship, and the University continually organizes networking opportunities for students to connect with potential employers. Jaime first connected with his future employer when a representative from Spirit Airlines came to tour the program's facilities. 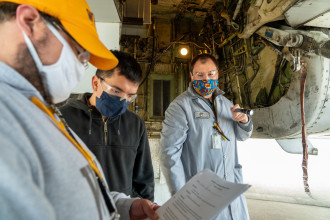 "Because of the quality of training that Spirit witnessed here—the representative from Spirit said he never realized the technical nature and advanced curriculum we offer at Western—he told Jaime once he graduates and gets his airframe and powerplant license, he has a job with Spirit," says Tom Thinnes, recruitment, marketing and outreach manager for the College of Aviation.

Jaime actually had a number of full-time job offers before graduation; aviation Broncos are in high demand as the industry faces worker shortages. He chose Spirit because of the company's national reputation as well as the ability to be close to his family in Chicago.

And he won't be too far from his old stomping grounds at Western, where he made many memories both on and off the tarmac.

"My favorite part of WMU has been all the new friends I have made," he says. "Not knowing anybody when I first arrived, I was welcomed by many people who were in the same position as I was. The friends I have made at the College of Aviation since day one are still some of my best friends."