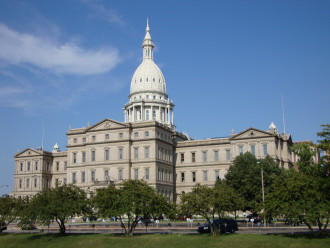 "The climate crisis is really important to me, and I see in my future doing a lot of work with it," says Kennedy Williams, an environmental sciences and sustainability student from Kalamazoo who is also studying Spanish. "This was really helpful to me in laying the groundwork for how I can speak to my representatives and what I need to be speaking to them about. It opened up this new door for me to what I want to be doing and what's important to me, and how I can interact with these people who play a key role in the mitigation of and adaptation to climate change."

Conan Smith, president of the Michigan Environmental Council, also met with a group of students and spoke with the class about the importance of engaging in the democratic process.

Keele, associate professor of political science as well as environment and sustainability, started the town halls in 2013 as a way to give students a new experience and a sense of empowerment. She feels they're even more relevant today as politics have become so divisive in a number of areas.

"To remind folks that we can sit down and have a civil conversation about this is, I think, even more important in these times. Because these students do know what's happening with the environment and climate change. They are incredibly disheartened about it and they are incredibly disillusioned about the political process," she says. "Without citizens effectively engaging in that process, we do not have democracy. And that's what students really can gain from this is that they can make a difference."

Students, while admitting some anxiety before their presentations, say the experience was both positive and eye-opening, allowing them to see legislators on a different level, genuinely interested in their research and policy ideas. 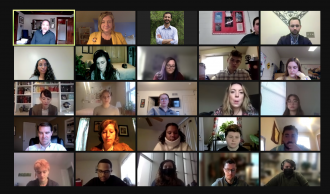 Conan Smith talks with students in the virtual town hall.

"I think it's empowering. This class really allows you to voice your opinion and speak up for things that you stand for, or even voice your opinion on things you don't completely agree with," says Madison Smith, a biomedical sciences student from South Haven, Michigan.

"This definitely broke down the barrier between the constituent and the representative and showed just how easy it is to have these conversations," adds Williams. "I will definitely be sharing this with my friends and family and telling them how easy it was. And how some research really takes you that much farther in your knowledge and being able to speak with these people."

Many students in the course are not political science majors with plans to enter politics after graduation. But legislation and decisions made by lawmakers affect everyone, and students found it valuable to open the lines of communication and learn how to engage in the democratic process.

"Realizing you don't need to do activism or politics for your job in order to make an impact is super encouraging to me," says Samantha Yates, an accounting student from New Boston, Michigan. "There is a lot of stuff I care about but don't necessarily get paid to advocate for, so to take home that this is still stuff I can do in my free time outside of work is good to know. And now I have the tools and resources to do it."

"The most impactful part for me was being able to put that first foot forward," Williams says. "It's really awesome Dr. Keele gave us this space to be able to do this and the resources, because it's not something I would have done in another setting."

"It is so important they practice now when the stakes aren't so high; when they're students as well as constituents," Keele says. "My biggest goal is to open students up to the experience, (teach them) that they can do this, that their voice does have power. And even though they feel overwhelmed, just trying it out, I know, will lead to their future success in civic engagement. And that's really what it's about."