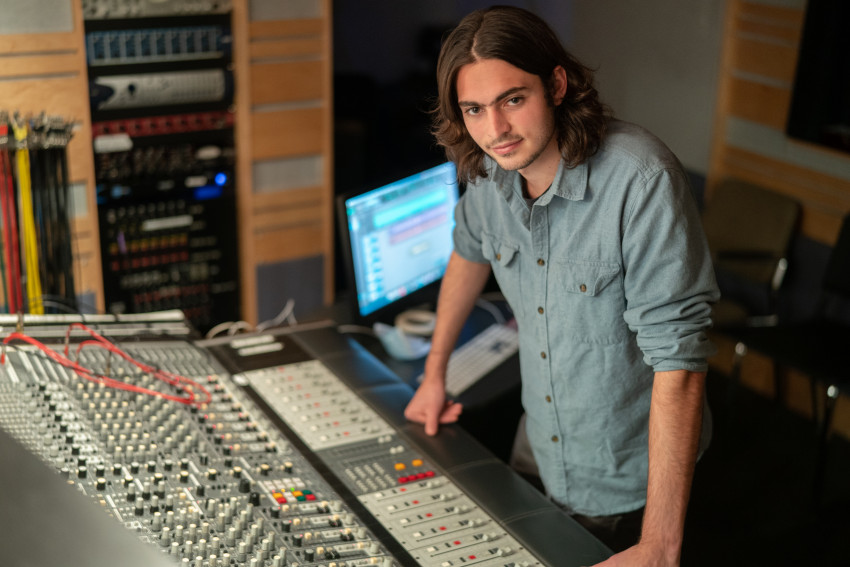 Jacob Wolfe is putting his degree to work a full semester before graduation after landing a job at Yessian Music.

KALAMAZOO, Mich.—Music isn't just background noise or a hobby for Jacob Wolfe; it's a passion. At Western Michigan University he found a path to turn that passion into a career—one he'll be starting while he completes his final semester after scoring a gig as a junior sound designer for Yessian Music, a global recording and composing studio in Detroit.

"I'll be doing sound design for commercials, interactive media, possibly some video games and stuff like that," says Wolfe, of Okemos, Michigan, who will graduate with a degree in multimedia arts technology in spring 2022. He received the job offer at the beginning of December and will start in January, completing his final credits remotely. 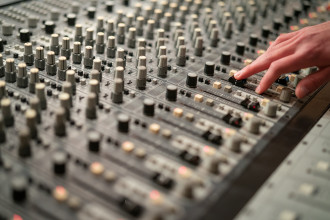 Wolfe found his passion in the music studio.

"The last three or four weeks have been pretty crazy, but it feels very nice to know that after I graduate, I'll already be working and have a job that I'm very interested in and hopefully have a lot of fun doing."

It's a reality Wolfe hadn't envisioned when he first started college, pursuing a chemistry degree at Northern Michigan University. While he was interested in the subject, it didn't really spark excitement like music did.

"I was playing guitar, trying to sing a little bit, I was trying out electronic music, I was recording anybody else playing—whatever I could get my hands on," he says. "I spent all of my time making music and doing music production. I thought, 'I'm doing this stuff 10 times more than I'm doing my actual classwork, maybe it's time to look for a program for it.’"

Research led him to Western's multimedia arts technology program, where the comprehensive nature stood out to Wolfe in a sea of possibilities.

"It wasn't like I just wanted to play guitar; I could have done that with a guitar performance degree or something like that. I could have done just an audio engineering two-year program. But I wanted to do everything, and this program had an option for that," he says. "You do everything from playing an instrument to computer programming to audio for video, all-analog recording, all-digital recording; it's pretty comprehensive."

A supportive symphony throughout his time at Western, Wolfe says his instructors have been instrumental in setting him up for success in the music industry.

"John Campos from Western Sound Studios was a huge influence, especially early on. I took his intro to audio engineering class—it was one of the first classes I took—and he was very instrumental, telling me to go out and do things all the time, every single day working on getting better," says Wolfe, who also credits Drs. Christopher Biggs and Carter Rice for helping him develop the audio and computer programming skills he will utilize for his new job. "It was kind of a culmination of everyone's knowledge and willingness to teach." 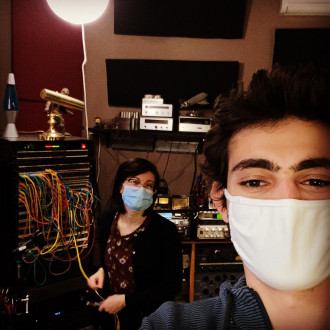 Wolfe also amped up his resume through a number of internships, developing mobile applications at Shure Incorporated in Chicago; working as an assistant recording engineer at La Luna Recording and Sound in Kalamazoo; working in audio installation at Smart Technologies in Lansing, Michigan; and doing audio coding and programming at Audible Reality, a startup in Boston. He says his internships were crucial in "furthering learning and how to apply all this knowledge to real-world projects and work with other people on them."

Wolfe also worked as a live sound engineer for Western's renowned Gold Company and Gold Company II jazz ensembles and a recording engineer for the School of Music's recitals. He counts working with other students on studio projects among his most impactful experiences at the University.

"Being in a room and trying to meet the creative vision of someone else's project, that will be very, very, very impactful and important to what I'm going to be doing in this job (at Yessian)," he says. "Working on group projects is a big focus of the multimedia arts program and one of my favorite things about it."