KALAMAZOO, Mich.—Research underway at Western Michigan University could revolutionize the future of testing for drugs, which is subject to abuse.

"The main way the outcomes of substance abuse treatment and prevention programs are evaluated is by whether or not patients or clients cease, reduce or avoid illicit or harmful drug use. The traditional objective way of measuring this has been through analysis of urine for drugs. However, this has certain drawbacks," says Dr. Stephen Magura, research director of behavioral studies at The Evaluation Center.

Urine collection is intrusive and difficult to validate due to privacy issues and potential tampering. This project—the largest and most wide-ranging of its kind to date—will determine whether oral fluid testing, involving collecting a small sample of fluid from the mouth, is a more viable option.

The research, which began in 2019 and is expected to continue until August 2023, is funded by a grant from the National Institute on Drug Abuse. While there have been small studies comparing oral fluid with urine in laboratory and treatment settings, this project will be the first to study a large number of oral fluid/urine paired specimens (1,000 in this case) from patients in real world programs. It will also test for 130 different drugs.

"Because the sample is so large, we will be able to look at relatively still rare drugs which might not be rare in the future," Magura says, mentioning fentanyl was once rarely detected among drug-addicted individuals but has become much more common.

"Western is a great partner and excellent resource to have here in the Kalamazoo community," says Bridget Lorenz Lemberg, Forensic Fluids lab director and toxicologist.

"Working with WMU gets the story of oral fluid laboratory testing out in different publications, plus it supplies our Kalamazoo lab with future science team members from the University," adds Reed. Forensic Fluids employs several Western alumni and is excited at the prospect of adding even more students to its roster as its business continues to expand testing capabilities. 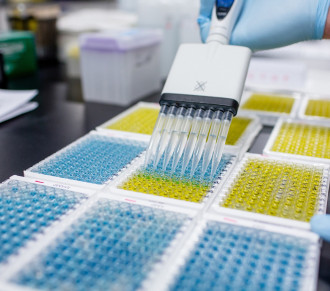 Using state-of-the-art liquid chromatography-tandem mass spectrometry (LC/MS/MS), the lab tests the specimens and sends the results to the research team for statistical analysis.

"The practical impact the study could have is that urine testing will be much reduced in substance abuse and treatment programs, including perhaps a total move to using oral fluid. So it could have a very substantial impact," says Magura, adding that data so far, while very preliminary, support his hypothesis that oral fluid analysis performs about as well as urinalysis.

Beyond clinical applications, Magura sees a potential epidemiological utility for this study's findings. If oral fluid becomes a more widely accepted vehicle for drug testing, it could play a substantial part in drug surveillance—a critical method of early detection of local and national drug epidemics, such as the current opioid and emerging methamphetamine crises, as well as changes in trends.