February is Black History Month, an annual celebration of achievements and a time to recognize the important role Black history plays in U.S. and Western history. This month, the University is celebrating Bronco alumni who’ve inspired change, pushed boundaries and paved the way for so many.

KALAMAZOO, Mich.—Chianté Lymon was just 4 years old the first time she remembers encountering racism. There was a television crew at her school in Detroit interviewing students, and Lymon was suggested as one of the top students in her class.

"I remember hearing the reporter say, 'We're looking for a lighter (skinned) child.' And my mom overheard it, and there was a discussion, of course," she says. "My mom later explained to me what was going on." 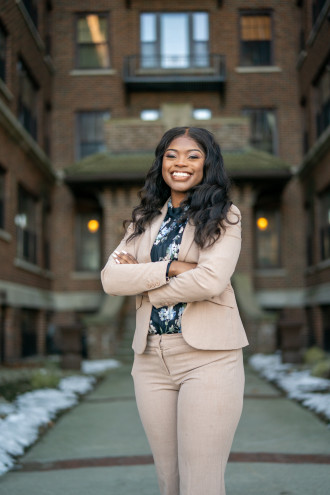 The encounter planted the seeds of social justice in her head.

"That moment has always been in my mind. Regardless of how good your grades are, regardless of anything, you always have to advocate for yourself and also for others," Lymon says.

Two decades later, she now leads an organization focused on eliminating racism through education and community outreach. She was named executive director of the Society for History and Racial Equity (SHARE) in Kalamazoo in April 2021, just three years after graduating from Western Michigan University with a bachelor's degree in criminal justice.

"Being able to make a change in people's lives and in the workplace, I think, is really where my drive is," says Lymon. At 25, she's younger than many executive directors. But the skills she honed at Western made her the perfect candidate to take SHARE to the next level.

"At Western, I learned a lot about myself and my leadership style," says Lymon, who served as president of the Western Student Association—the first Black woman to lead the organization in its more than 100-year history. "Those moments of learning and growing and understanding who I am helped me in my transition to leadership now."

As the second executive director of SHARE, Lymon succeeds Donna Odom, who in 2003 created the organization, then called the Southwest Michigan Black Heritage Society. It expanded to become a catalyst for change in the region through its Racial Healing Initiative, offering workshops, community discussions and educational opportunities in the community.

Now as SHARE approaches its 20th anniversary, Lymon is looking to take the organization into the future.

"Working with youth is something we'd like to do more moving forward as well as collaborating with the community a lot more," she says. She'd also like to expand the organization's online presence. "I want to make sure we're more visible in the community and make sure that we're creating a space for everyone."

The determination to advocate for herself and make her own success is something Lymon developed at a young age, living in a distressed neighborhood in Detroit.

"I had my first job at 15—not because I wanted one, but because I had to provide for myself," she says. Lymon remembers initially being told she was too young to work but persisting until the manager agreed to give her a shot. "I learned so much about taking a chance on yourself and not letting 'no' be the final answer."

It's also what inspired her to apply for college. 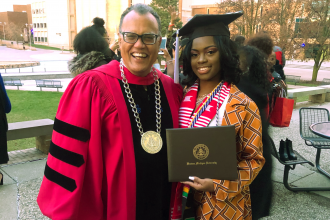 Lymon stands with WMU President Edward Montgomery after her commencement ceremony in 2018.

"I knew I had to do it for me, and I had to figure out what it would look like for me as far as education, because I didn't have much guidance," she says. She found that guidance at a college fair at her high school where she met Alvina Gipson, assistant director of admissions, who focuses on outreach in Detroit. "We were having a conversation about college … and she said, 'You're going to be okay. We're going to get you in school.' And I got a couple more offers, but after that conversation with her I felt very welcomed. I felt like Western is a place where I can grow and learn."

When Lymon arrived on campus, she took advantage of the many programs and opportunities to get involved, joining the Western Student Association, Delta Sigma Theta Sorority Inc. and Drive Safe Kalamazoo, among other endeavors. Lacking the support from her mother, who didn't approve of her attending college, she created her own community at Western.

"I overheard someone at Fall Welcome talking about resumes and I thought, 'I should probably have one of those.' So I went to Career and Student Employment Services," she remembers. Dr. Deveta Gardner, associate dean of Merze Tate College, was a career advisor at the time. "She overheard me talking to one of the students about wanting to become attorney general. She walked out and said, 'I have someone I think you should meet;' it happened to be Alisa Parker(-LaGrone)."

Parker-LaGrone, a Western alum who is now a judge in Kalamazoo County's 8th District Court, became a mentor to Lymon, sharing her passion for social justice. She helped Lymon become the first youth member of the Judge Charles A. Pratt Bar Association, an organization for attorneys and judges of color in southwest Michigan.

"Being able to sit in a room with successful individuals and understand that success, it is a journey, but it's worth every moment," Lymon says, stressing the importance of representation and the opportunity to see people who look like her that are successful in their professions. "It helped me become who I am. Having that school support as well as that community support is what helped to push me and also kept me here in Kalamazoo longer." 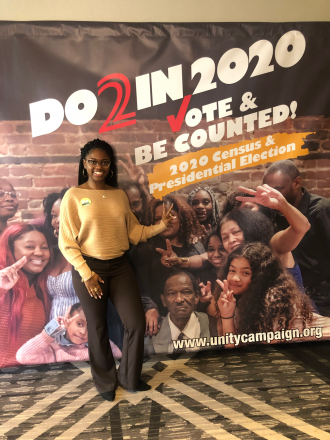 Lymon attended a Vote and Be Counted event in Washington, D.C. Her Signature P.E.A.K. project at Western involved empowering students to vote.

Lymon also felt empowered at Western to think outside the box and put her passion into action. With her Signature P.E.A.K. project, she helped to launch WeVote, a campuswide effort to get students registered to vote and promote student engagement. Signature P.E.A.K. projects are culminating experiences that give students an opportunity to apply what they've learned in and out of the classroom to real-world problems.

"One of the things that makes me proud to be a Bronco is the opportunity to create things," says Lymon. "At Western you have the autonomy to create an organization, and that helped me in my adult life. Realizing that, yes, maybe things have been done one way over time, but maybe there's a better way of doing it and to not be afraid to change and make it different, make it your own."

She's carried that mantra with her into her professional life, first with the Kalamazoo Defender's office—where she worked as a social media and technology specialist, legal assistant, and board liaison and facilitator for the office's anti-racism team—and now as she leads SHARE into the future.

"If you can impact the people you're around on a regular basis, that's making an impact each and every day," says Lymon, who still has law school and a goal of one day becoming U.S. attorney general in her sights. "You don't always have to make this huge change or feel like you have to do this really big thing for things to really change, because usually it's the people on the ground doing the work. There may be a spokesperson, one leader—Martin Luther King was one person, but there were many people that were behind him doing the work to make one man's dream come true."