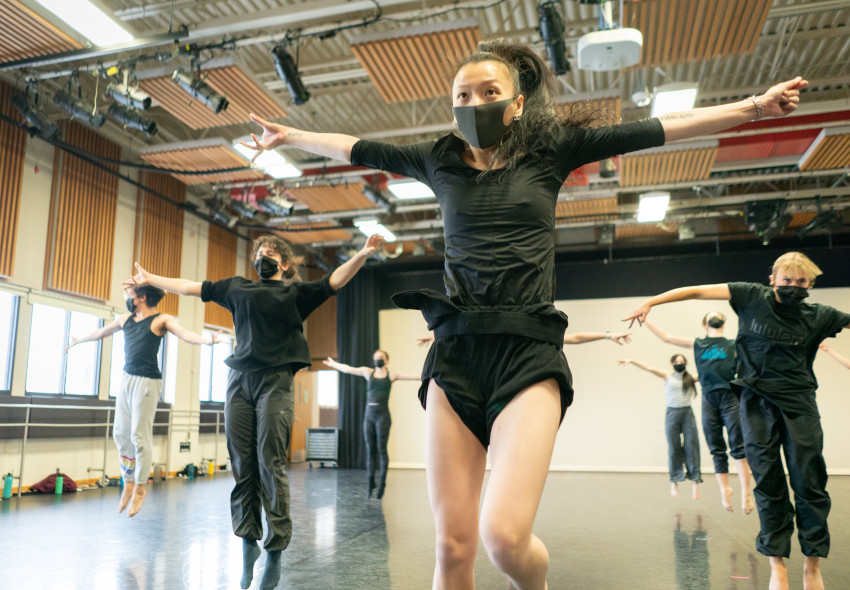 KALAMAZOO, Mich.—Intensity, strength, competition and raw, unbridled emotion—the best performances keep the audience on their toes as much as the dancers.

"I want the audience to be surprised. The music and movement together have a very nice build, and it's almost as if you can't see what the next part is that's coming. I want them to feel the intensity from the stage," says Noelle DeWees, a fourth-year Western Michigan University dance student tapped to perform the world premiere of Tsai Hsi Hung's "Woman" in WMU Dance's upcoming Winter Gala Dance Concert.

"There's a magic between (the) students. They have a connection with each other; it's very powerful," says Hung, an internationally known Taiwanese artist based in New York who won Western's National Choreography Competition.

Video of WMU Dance rehearses &quot;Woman&quot;
She drew inspiration from her all-female cast when developing the choreography. The piece became an ode to the female experience.

"As dancers and artists and women, sometimes we naturally just fall into this game where we are set up against each other, and we don't want to be. But it's just trying to disengage from that and find a different way and structure around that mentality," says Avree Gundersen, a fourth-year dance student. "I've never worked with such a fierce and fiery cast before. We're all the same age, generally, and we're all just strong and wild beings. It's amazing; the energy is just—it's amazing to be part of it."

"Woman" will be the culminating performance of the Winter Gala Dance Concert, which also showcases works by guest artists Penny Saunders and Marisa Bianan as well as faculty and students. There are four performances scheduled from Friday, Feb. 18, through Sunday, Feb. 20, in Western's Shaw Theatre. Space is limited and COVID-19 safety policies are in place. For more information and to purchase tickets, visit the event webpage.

Hung came to Western as part of the Great Works Dance Project, which brings renowned choreographers and guest artists to the University to stage and rehearse original works as well as teach master classes to students across the dance program.

"I've been in Great Works every year since I was a freshman, so I've had a wide experience with different guest artists coming in. But Tsai Hsi is probably my number one experience," says Gundersen. "She came in with maybe half of a concept, half of an idea, and then once she met us and built that relationship with us, she let that complete the other half of the process of the creation. It was beautiful that she let us be part of it." 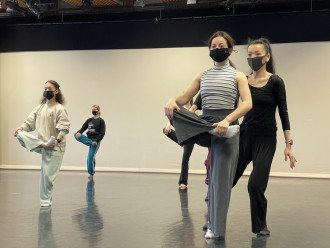 In addition to choreographing "Woman" and working with her cast, Hung also held master classes for students during her weeklong residency in October and again when she came back for final rehearsals.

"In October when I came, (the students) were already very good. They were already 'there,' I mean, it was very amazing," remembers Hung. "Now I'm back this time and just taught a class, and I saw them even stronger. Not just technique—their technique, of course, is getting better—but their energy is very powerful, very strong. I feel like they're very different."

The opportunity to work with a diverse and well-known array of guest artists helps to set Western dance students up for success in their careers, giving them important industry connections and helping them become more well-rounded in their craft.

"Even if you're not in their piece, they still teach your class throughout the week. It just gives you more versatility as a dancer," says Dewees, who grew up in suburban Chicago. "That diversity in my movement is really what's going to help me when I graduate."

"It's been beautiful. I can't even count the amount of connections I've made in these last four years with all of these guest artists that come in. And every time I tell people and other choreographers or directors that I'm from Western, they say, 'Oh, it's a hidden gem!' And it really is," adds Gundersen.

She initially found Western through an alumna teaching a class in Boston, about an hour east of her hometown of West Brookfield, Massachusetts.

"She told me, 'Western is the place for you,' and I did some research and ended up here. And it just all fell into place; I love it. It's the best decision ever," Gundersen says. "I prefer the smaller environment at Western because it's closer, it's more intimate and you get personal attention, as opposed to other universities where it's a lot bigger and it's not personal."

Students in Western's program not only have the opportunity to learn from world class faculty but learn with them, as well. Many instructors take master classes alongside students to hone their skills and learn new techniques.

"When the professors come (and take class with us), it's a two-way street. It's not like they're just giving and giving and projecting all of this information on us; they're also learning from us," says Gundersen.

The personalized and holistic approach extends to the curriculum; a distinctive trifocal approach to training allows dancers to train in ballet, jazz and modern dance techniques rather than focus on just one discipline, encouraging students to chart their own course. In fact, the program director asks students in first-year performance classes, "Why dance?" 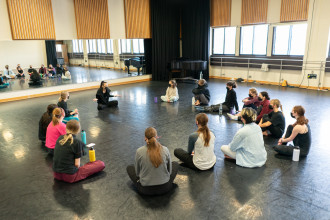 Hung talks with students after class.

"Of course we all write, 'We love dance, we can't live without it!' And as you get to be a senior, you realize why it is that you love dance so much," says Dewees, who has taught dancers at a local studio for the past three years. "I love the community. I love helping others learn to dance as well. Seeing instructors and teachers like Tsai Hsi, where she inspired me—it helps me now inspire others as I'm learning and teaching them."

Gundersen has also seen tremendous growth in her time at Western.

"A lot has happened in these four years, and my love for dance has grown to where it's not just a task; I'm not just doing it for somebody else," she says. In addition to her dance major, she's also tied in a minor in holistic health and wellness and a certification in dance management. "Western has just let me restart my relationship with dance. I think it's made it impossible to not have this artform in my life."

Even Hung, who has traveled the world creating art and choreographing award-winning pieces, agrees there is something special about Western's program.

"I love it. For me, it's a very pure place and also gives me a lot of strong energy," she says. "When I'm in New York, sometimes I feel lost because everything is so fast. There's a lot of competition—sometimes too much for me. Coming here gives me a lot of that feeling I had back in the beginning, remembering why I love (dancing)."

The performance of "Woman" earned Western's 16 dancers concert recognition at the American College Dance Association East-Central Regional Conference at Ohio University in March, a designation given to only 10 of the 38 performances. Professional adjudicators critiquing the dance noted strengths in the energy and composition of the piece, one saying, "You brought the storm. You are the storm. You brought the fire. You are the fire."