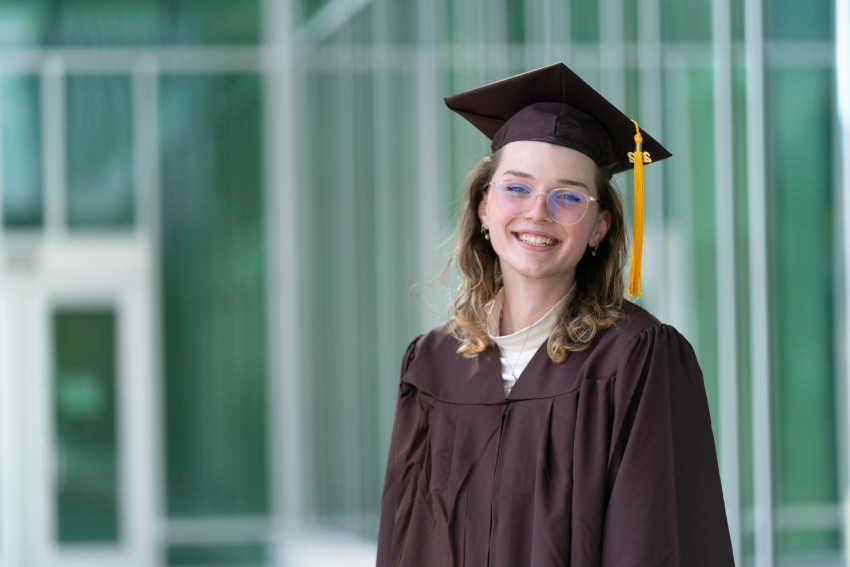 Hawke Osterhout will graduate with a bachelor's degree in psychology and plans to pursue a master's degree.

KALAMAZOO, Mich.—College is a journey of self discovery. Beyond academics, eye-opening internships and passion-igniting experiences offer students a chance to chart a course to a fulfilling future. For Hawke Osterhout, their time at Western Michigan University was nothing short of life-changing.

"Becoming a Bronco allowed me to flourish," Osterhout says. "I've gained such a brighter perspective on life. It's improved the way that I view the world and has given me not just an education but a different way of looking at people, a different way of talking to people who might have different perspectives than me. And it's been really cool to be celebrated—not just supported and seen on campus, but celebrated as an individual. Western just celebrates students for who they are." 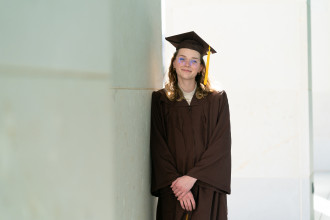 "Becoming a Bronco allowed me to flourish," Osterhout says.

Now poised to graduate Saturday, April 30, with a bachelor's degree in psychology, Osterhout has a clear vision for the future. They plan to continue their education at Western in the counseling psychology master's program.

"I want to combine my (psychology) major and holistic health minor to eventually become a mental health counselor who specializes in integrative holistic health care, with a focus on spirituality and bereavement," says Osterhout, who made the decision after writing a capstone paper on the subject and talking with mentor Dr. Michele McGrady, assistant professor of holistic health and wellness.

"I was able to research the connections between integrative holistic health and spirituality and found clear connections to psychology. I discovered my own passion for the field and want to help others who may struggle with spirituality or the loss of someone they love, since it's a topic many people tend to avoid."

Osterhout isn't one to shy away from difficult topics. It's something they've learned to embrace, empowered by the welcoming and diverse community they found at Western.

"I came from a super small, rural village with not a lot of acceptance and not a lot of representation, so I developed some internalized homophobia," says Osterhout, who grew up in Goodrich, Michigan, and identifies as nonbinary and queer. Five years since arriving on campus, their growth is evident. "My gender expression and identity are as important to me as my humanity, and it has been really cool for me to finally embrace that."

Osterhout initially came to Western intent on studying the arts.

"My theatre director in high school mentioned Western's theatre program was phenomenal," Osterhout says. A visit to campus sealed the deal. "What originally drew me in was fine arts and how much that was supported here."

Osterhout moved into the Fine Arts House their first year, a living learning community for students studying visual and performing arts. They found friends and a sense of belonging that immediately made Western feel like home. Osterhout also joined a campus a capella group, No Strings Attached, and dove headfirst into fine arts programming.

"I loved the experience I was getting. I was learning a lot about scenic art and costume design," Osterhout remembers. While theatre may have been their first love, a psychology class they chose to fill an elective set the stage for a career course correction. "I was just mind-blown by that class." 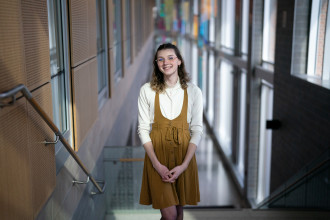 The summer between their first and second year, while going through orientation leader training, Osterhout had an epiphany. The monthlong process involved a number of personality assessments and conversations with other orientation leaders about their passions and aspirations and, to Osterhout's surprise, psychology kept coming up.

"I was able to learn about my strengths, who I was as a person, what I was passionate about, and I realized that psychology was so much more of a better fit for me."

With the help of advisors, Osterhout was able to officially switch majors. Supportive faculty like Dr. Jessica Van Stratton, associate professor of psychology, offered opportunities to put their newfound passion into practice.

"I took an educational psychology class with her, and she invited me to her practicum," Osterhout says. They worked at an early childhood special education center, developing plans to increase positive behaviors among students. "It really helped me to realize that I wanted to make a difference in people's lives."

Osterhout feels more than prepared to take on the challenges ahead in their career thanks to outstanding instructors across campus.

"At Western, every professor I've had is determined to make sure that not only are students passing their class, but that they are actively applying that information," says Osterhout. And it goes beyond knowledge retention.

"Dr. Michele McGrady taught a class I was in last semester, and the way she cares for her students and creates so much space to listen to them and creates an open and authentic environment … has made a world of difference."

Now, finally able to cross the finish line at commencement, Osterhout sees a bright future ahead.

"Western, to me, represents how encouraged I was to grow as a person, not just as a student," Osterhout says. "The person I am today is definitely someone I wished I could be when I was a first-year student, and to know that I'm going to be walking across that stage as that person means so much."