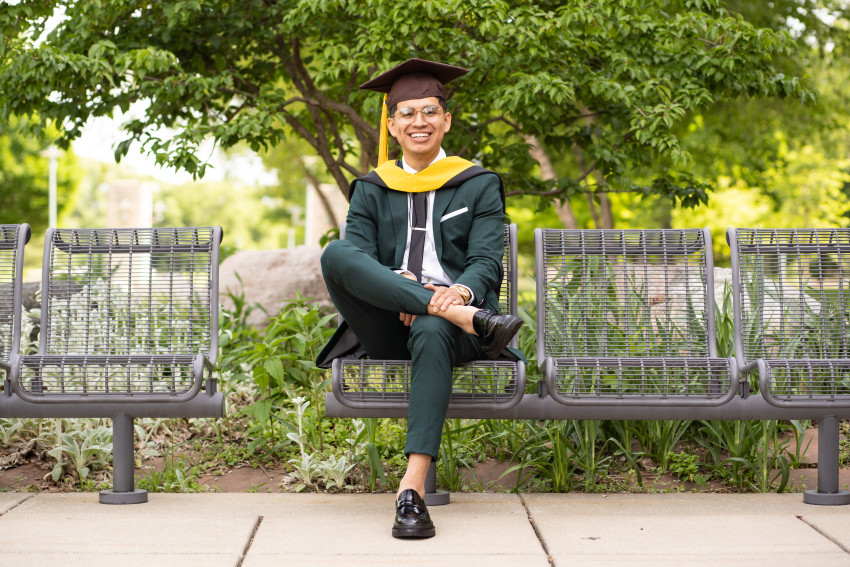 Luis Angel Morales is ready to start his career as an occupational therapist.

KALAMAZOO, Mich.—Luis Angel Morales has been working toward being an occupational therapist since he was little—he just didn't always have the words for his career path.

As a kid, he accompanied his parents to doctor and specialist appointments with his younger sister who has autism. Morales would translate because his parents, who immigrated to the U.S. from Mexico, did not speak English.

"That language barrier was there, and since my sister is nonverbal, the communication barrier was there as well," he says. Seeing the challenges his sister and family faced in her autism diagnosis and treatment, he was driven to find ways to help. Western Michigan University's Department of Occupational Therapy provided a path to channel that drive into a meaningful career. 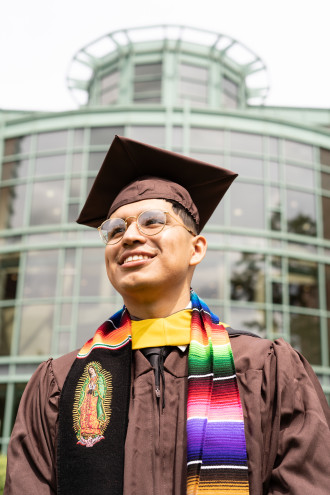 "As occupational therapists, we're the creative ones. I was always able to visualize things in my brain growing up. So when I actually got to utilize my skills in class, I thought, 'Yes, this is for me.'"

Set to graduate Saturday, June 25, with a master's degree, Morales has a world of possibility in front of him.

"The department was definitely amazing to me. Every teacher impacted me differently," he says. "Something I really liked about the program is that they get to know you—you're not just a number. There are also a lot of opportunities to network with others and to connect and a lot of research opportunities."

The connections he has made during his time at Western have paved the way for exciting career opportunities in neurorehabilitation and acute care. With clinical rotations at Origami Brain Injury Rehabilitation Center near Lansing and in the neuro/intensive care unit at Memorial Hospital in Indiana under his belt, he now has the experience to put his dreams in motion— a huge accomplishment for the first-generation college student.

"I want to help those who look like me. Down the line I hope to do pro bono work and help out those who can't afford the services, because I know what it's like to not be able to afford those services," says Morales, who is weighing a number of potential career options. "People have helped me throughout my journey—not just in college but growing up, too. I want to do that for other people as well."

Morales started planning for his future early. As a member of the Jeter's Leaders program, which empowers high school students to achieve academically and give back to the community, he was able to shadow professionals at Bronson Hospital in Kalamazoo and also begin exploring the possibility of college.

Western's accelerated program, which would give him the opportunity to obtain a bachelor’s degree in interdisciplinary health sciences as well as a master's in occupational therapy in just five years caught Morales' eye. Through the Kalamazoo Promise, Morales knew his undergraduate tuition would be covered. But he wanted to start saving up to pay for his master's, so he took on three jobs in high school working as a dishwasher in a restaurant, a stocker at a gas station and a sales associate at a shoe store.

Morales also made service a priority, helping low-income families in Kalamazoo—something he has continued throughout his time at Western.

"Things like helping them fill out job applications, help with transportation such as taking them to the store or doctor appointments, and translating documents," he says. "We did a clothing drive at Western, where a lot of the faculty and students helped out, and a toy drive as well." 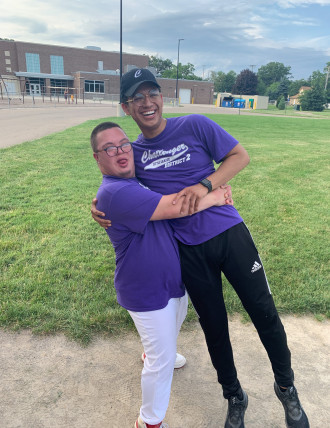 Morales is a coach for Challenger Little League.

Morales also serves as a coach for Challenger Little League, an adaptive baseball program for kids and young adults with disabilities. It's a labor of love inspired by his little sister.

"These individuals are like superheroes, in my opinion," he says. "They deserve to have fun. I love coaching. I love giving them the opportunity to come out and just have fun."

Morales' commitment to giving back ultimately led to financial assistance for his graduate studies as his mentor, Dr. Maureen Mickus, helped him apply for the Thurgood Marshall Fellowship, which recognizes graduate students who embody the ideals of the late Supreme Court justice.

With a number of job opportunities on the horizon, Morales can now see his parents' dreams coming full circle.

"Growing up for them, it was hard. This is why they came over here, to be able to give us a better future," he says. "We've been through a lot, and I just want to make them proud."