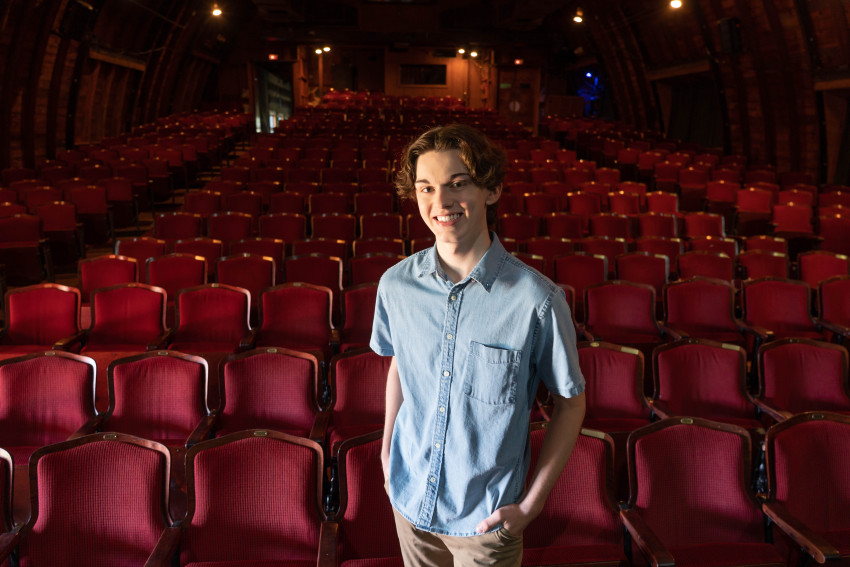 BATTLE CREEK, Mich.—Named a rising star and selected to share the stage with some of Broadway's brightest in New York, Jack Austin is well on his way to his dream of a performing career. But the Great White Way can wait a few more years while he prepares for his next big role: college student.

"I was looking around and I just kept coming back to Western Michigan University's program," he says. "It's one of the best in the nation."

Western's music theatre performance program accepts about 16 students every year out of hundreds of applicants. Austin's audition earned him a coveted spot in the newest class. 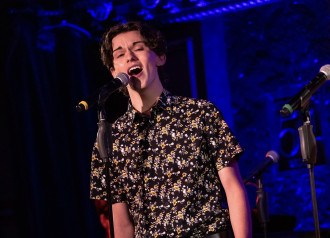 Austin sings on stage at 54 Below in New York.

"I didn't realize how competitive it was until I was actually doing it," he laughs. But it was the support he felt in the audition process that really made Western stand out. "I was looking for the community feel that I saw in videos (the program posted online), and I loved the overall vibe I was getting from the school."

Austin got a jump on his musical theatre education over the summer after a surprise message on social media the morning of his high school graduation party.

"I was just setting up pictures and I looked at my phone and there was a message on Instagram asking me to come sing at this event in New York. I thought it was a scam at first, but the more I looked into it, I thought, 'Oh my gosh, this is actually real,'" he says.

The message was from the producer of a show called "20 and Under Sing 20 and Over," which features a handful of young rising stars singing classic Broadway hits alongside current Broadway stars. He'd seen a video Austin posted on TikTok singing "Maria" from "West Side Story" and invited him to be in the showcase at 54 Below, a cabaret and restaurant owned by Broadway producers.

Austin jumped at the opportunity and soaked up as much as possible on his whirlwind New York City trip. He managed to squeeze in two Broadway shows before taking the stage himself for an unforgettable night of performances.

"It was really surreal, because I was singing on the same stage that I've seen some of my favorite Broadway stars sing," says Austin, who sang songs with Phoenix Best of "Dear Evan Hanson," Alex Joseph Grayson of "Into the Woods," Mary Kate Morrissey of "Mean Girls" and "Wicked," and Jonalyn Saxer of "Mean Girls."

"They were all really nice and just very encouraging," he says. "It was great. It was everything I hoped for." 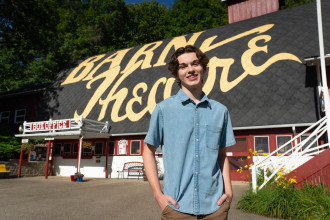 Austin performed at the storied Barn Theatre in Augusta, Michigan, this summer.

Austin also made some industry connections at the show that he hopes might lead to more opportunities down the line.

The experience capped off an exciting summer that also included a music video release for his song, "Veronica"—the second song he's written and recorded—as well as his Barn Theatre debut in the show "Seven Brides for Seven Brothers."

"I didn't know I was going to go into theatre (professionally) for so long, but once I decided to follow this as a career path, I was thinking about local opportunities. And the Barn is the closest professional theatre to home," says Austin, who grew up in Battle Creek and started community theatre in elementary school.

Now he's looking forward to becoming a Bronco and diving headfirst into the college experience.

"I'm just excited to meet a lot of new people and to better myself through education, too. I know I have a lot of room to grow as a performer, so I'm excited to get to Western and have different outlets to explore."