Western students break down barriers through music with United Sound

KALAMAZOO, Mich.—A roaring round of applause reverberates through a Chicago ballroom as the United States Navy Band finishes a performance. One of the nation's premier concert bands, the ensemble is accustomed to ovations. But on this night, a group of guest musicians from Western Michigan University steals the show.

"I almost cried at the end; I definitely teared up a little bit," says Taylor Scott, co-president of the University's chapter of United Sound, a registered student organization (RSO) launched in fall 2021 that partners with Western's Center for Disability Services to offer peer mentorship for young adults with disabilities interested in learning how to play an instrument.

A group of nine mentors and three musicians from the United Sound RSO made the trip to Chicago to play with the U.S. Navy Band.
(Courtesy: John Reichanadter)

"It makes my heart happy to see him joyful and proud as a part of his band," says Chris Maynard, whose son, AJ, played trumpet alongside servicemembers on Dec. 19 to open the 2022 Midwest Clinic International Band, Orchestra and Music Conference—the world's largest instrumental education gathering.

"Seeing our chapter start very small and grow, and at the end of our first year, we get to do this big event—I think it's really cool," says Alyson Johnson, United Sound chapter co-president.

The growth extends beyond chapter size. Family members of the nine musicians involved in the program say they've seen their children blossom over the past year through mentorship and fellowship.

"United Sound has been a wonderful experience for Carly and our family," says Colette Guerin, whose daughter, Carly, was connected to the group through the Center for Disability Services. "The biggest joy we get is seeing her with her mentors and enjoying time with them."

"Music is a great way for AJ to increase his confidence and really promotes interacting and communicating with others. This is a perfect program for him to do," adds Maynard. "AJ has missed the fellowship and fun of the high school band since he graduated. He will age out of special education services in the spring and is determined to go to Western. And (in a way) he already is! (With United Sound) he has classes in the Dalton Center."

AJ Maynard, left, plays the drums with the Bronco Marching Band at a Western football game.

"We had one musician who was really nervous before (our concert). And her mentors … said, 'Let's go look at the band and see what they're doing.' And she just got so excited, and after we played, she would not leave the stage," says Johnson. "It's so cool to see music make a change in somebody."

"The community this creates is something you don't get with a lot of other things. Music is one of the few things that can do it," Scott adds. "We've had some musicians who were nonverbal and others with a wide range of abilities, but the way they're able to play the same piece of music alongside Western students who are performance majors on the same stage … is really cool to see."

Dr. Mary Land, associate professor of music education in the Irving S. Gilmore School of Music, initiated the process of establishing a United Sound chapter at Western after feedback from recent graduates.

"When I ask them what we need to focus more on, the number one response is teaching students with disabilities," Land says. She had heard about the program, which mainly operates in high schools, and worked with the national founder to expand it to the college level. Today, Western is among just a handful of universities nationwide with a chapter.

"It's so important for our students to learn that it's not all about playing their instrument perfectly all the time. If it brings happiness, that's what it's about. And they also learn about kindness."

Johnson says she was initially drawn to the RSO to get experience as a music education major.

"My high school (orchestra) teacher was a loud-spoken, tough guy. But when he taught the special education class and when he talked about those students, his whole demeanor changed. And it always interested me and made me wonder if it's something I would like to do in the future," says Johnson, who is also a trombone performance major. "But that's not the main thing I've gotten out of it. It's just been great to have a community and see that community grow and build, see other people excited about it and, most importantly, to see the musicians get excited about it." 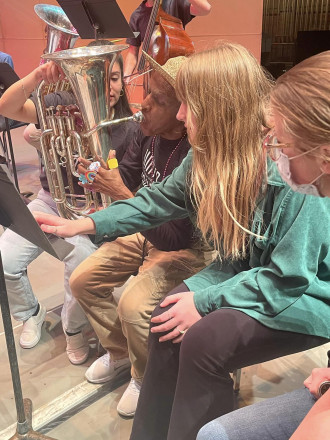 Scott, a music therapy and psychology double major, also found an opportunity to put what she's learned in her classes into practice.

"As a music therapy major, there's a lot of advocacy that goes into the profession," she says. "I think with United Sound I've gotten a lot of experience getting to mentor the mentors on how to work with people with disabilities."

Both Scott and Johnson have added new skills to their resume as well, which will make them more marketable as they search for jobs after graduation later this year.

"Setting up schedules … getting instruments for the musicians, fundraising: They have basically done an internship on how to be businesswomen here," says Land.

Western’s United Sound chapter is hoping to expand in spring 2023, adding more students in order to increase their capacity for musicians. While many current members are in the music education and music therapy programs, the organization is open to any student with a passion for music.

"Getting people involved in this organization is, at a small level, contributing to the greater good of including more special education students in band programs. And trying to prepare our future teachers for that will make a difference in the long run," says Scott.

"I honestly think it's been the most rewarding part of my time here, even as a performance major and going to D.C. and doing all these concerts," adds Johnson, who was one of three tenor trombone students nationwide—two of whom were from Western—selected to compete in the American Trombone Workshop's National Collegiate Solo Competition her first year on campus.

"They've all been great experiences for me, but I think just hanging out with these guys every week has been the best."